Zum Inhalt springen
These two countries have no good relations at the moment. So the border was no relaxed experience, unfortunately.

Not such a surprise, actually. De facto, Ukraine and Russia are at war with each other. Just 50 km south of the point where I had intended to cross the border, the Ukrainian army was still fighting the separatists of Donetsk and Luhansk, which were rather openly supported by Russia. The driver who brought us to the border had been to the front line the same morning – to pick up retired people, who had to cross the line in order to get their Ukrainian pensions.

The way to the border area had already been the first little adventure on this trip. On the road from Kharkiv to Starobilsk in war-torn Luhansk Region, we had crossed several army and paramilitary checkpoints, seen much war material, with horrible roads and a sunset adding to the atmosphere. Although not immediately touched by warfare, the area around Starobilsk was obviously still in a state of exception.

I had entered the area because there was  a particular border I wanted to cross: There is one town divided into an Ukrainian (Milove) and a Russian part (Chertkovo). The railway runs through the middle of that town, and parallel to the railway line is Ulica Druzhby Narodov – the Street of the Friendship of Nations. This street marks the border, with Ukraine on one side and Russia on the other. The friendship of these nations, however, was now shattered. The town, which had always been one entity, was now really divided. But it was hard to enforce that division. Closing down the Street of the Friendship of Nations was no option, since it was the main street of Milove.

Things got difficult at an army checkpoint before even entering Milove. A grim army officer pointed out that as foreigners, me and my travel mate would not be allowed to cross. He claimed the border was open only to Russians and Ukrainians. I had had that problem in my mind and checked the situation in advance. The terminology was, however, rather confusing. An international border crossing is called “mezhdunarodnyj” (“between-nations”) in Russian, while a local border crossing is called “mezhdugosudarstvennyj” (“between-states”). So from a semantic point of view, it was not that clear which term applied to the international category.

The army officer seemed convinced that we would not be let through. But helpfully, he called the border control and allowed us to go ahead. Only to have the border guards turning us down: It was a local border crossing after all, and as a foreigner there would be no mean to cross it. The border guard, a friendly young man, made that very clear. Even if they – the Ukrainians – were generous, he pointed out, there was no way the Russians would let us in. There was even a bilateral contract on that issue.

Discussing with the Ukrainian border guards in Milove

That was convincing, but also brutal. We had a ticket for a train that left Chertkovo station in a couple of hours, and the next international border crossing was quite a bit away. Luckily, we had come to the border in a taxi. Our driver found out that the next international crossing was at Prosiane, 62 km north of Milove. So we started a crazy run on very bad roads to Prosiane. We drove along the Russian border, which was not guarded at all. At some points, even minor roads crossed into Russian territory, with no fences or controls at all. It would have been so easy – but we needed the border stamp.

The international border crossing at Prosiane looked deserted. We were almost alone. No wonder, there are no bigger towns or roads around. No idea why Prosiane is “between-nations” and Milove only “between-states”. The Ukrainian side was easy, although one of the guards turned out to be a “coin collector”. But no way he would accept the Swiss 20 cent coint I was offering him: Cameras were registering all actions at the border and he feared corruption charges. So all I had to do was to sit down on a bench, leave the coin there, and stand up again…

The Russian side was not so much fun. The border controller, a mid-aged lady, just stared at my passport for at least 15 minutes, checking security features. No word at all. Some phone calls. Checks again. More people entering her box. We were waiting outside and told by the border guards that we should not sit on the floor (for which we had opted, since the bored border guards took that much time). After half an hour, finally some progress: The lady checked me into her system and put a stamp into my passport and onto the migration card.

She did not hand it over back to me. Instead, she told me to follow two men, which kept my passport. They did not identify themselves, but it was quite obvious that they were working for FSB, the Russian secret service. They brought me into an empty room with an empty table and put a white sheet of paper onto the table. Then they begun questioning me: Where had I been, where would I go, where did I work, a lot of in-depth questions about my life. They noted everything on the sheet of paper. It made me feel insecure, which was certainly their intention. But in the end, they said all was OK and let me go.

My friend had waited outside and was in a better mood: She had some fun during the luggage check with the Russian customs officers, who were happy to test their almost non-existing knowledge of English. Her luggage check remained rather superficial. Not so mine: I had to take everything out of my backpack and explain what it was. It took ages, and the FSB guys were still around. In the end, they were very disappointed that at some point the backpack was empty and there was nothing more to be produced. The last object was an edition of NEON, a German youth magazine. The guards then proceeded to check every page of it, although they did not understand a word. The editors of NEON would certainly have loved the picture of the five serious looking Russian border guards in front of my emptied bag, waving through their magazine. I did not dare to take a photo, though. In the end, there was nothing more that could hold up the guards from going back to their usual boredom, so they gave up and we were through.

The last checkpoint on the Russian side was very friendly. A guard shouted out loudly and in English: “Welcome to Armenia”. Whatever. Better a strange joke than another check.

Now the question was how to get to the next town, Kantemirovka, since there was no public transport. On the Ukrainian side, our taxi driver had found a small truck passing by, whose driver had agreed to take us to Kantemirovka. But now we had lost 1.5 hours at the border and he was through since at least one hour. We walked for some meters – and found that he had waited! One hour more or less didn’t make a difference, he said. What made a difference, however, was the petrol price: Russia was much cheaper. That is why after just 2 km, we already stopped. In a small forest, our driver had hidden a bottle of petrol, to avoid driving too far on expensive Ukrainian fuel. He refuelled, and we finally got to Kantemirovka.

It was a good place: We found out that our train also stopped there and got tickets for the additional way to Chertkovo. An old lady sold us the best strawberries we had in years. And the waiting time we spent in the dining room of the only hotel of Kantemirovka, next to the Lenin statue. A nice passport party was over.

Bilohirsk, Luhansk Region: This was once a Lenin statue. All of them in Ukraine have been destroyed.

North of Milove: Russia is on the right side, just across the railway tracks 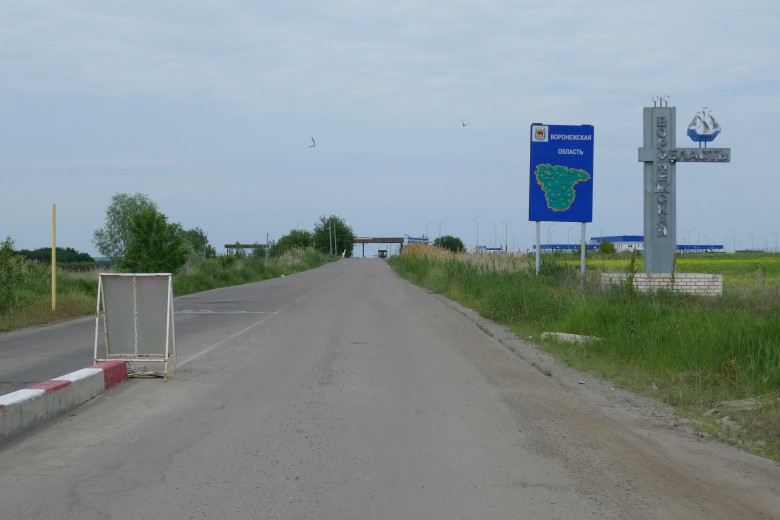 Kantemirovka – Lenin on the Main Square