Zum Inhalt springen
“Kazakhstan – greatest country in the world!” A hint of Asia, and taxi troubles in Astrakhan.

Coming from: Karaosek, Astrakhan Oblast, Russian Federation
Going to: Kurmangazy, Atyrau Oblast, Kazakhstan
Documents required: Passport, Russian visa. Kazakhstan is visa-free.
Waiting time: 5 min (Russia), 10 min (Kazakhstan)
Distance from Bern: 6.316 km
Crossed on 15/06/2017, 3:00 p.m.
Rating: 4/10
Description:
It was a long wait until the shared taxi departed. In the morning, I had arranged a seat in a vehicle departing for Atyrau in Kazakhstan at 12 o’clock. At 11.30 I was back, bearing the Russian sense of punctuality in my mind. I was expected, and two men were already in the car. We waited for one more, I assumed. Until I found out that instead of a trunk, there was one more row of seats. Soon, two elder ladies joined. But one or two persons were still lacking. Our driver shouted at every remotely Kazakh-looking person “Atyrau! Atyrau! To Atyrau we go!!” – and there were many of them, Astrakhan being an ethnically mixed town. The car did not fill up. The driver got nervous, started to rearrange the car every couple of minutes and thereby evoking false hopes of departure. Meanwhile, heavy rain poured down and slowly flooded the train station square of Astrakhan.

Astrakhan had been no fun. After rough Chechnya, I had enjoyed the comfortable hotel, Park Inn. And the train station square with its modern malls made an impression of a developed city. But the city centre was still as fucked up as it was twelve years ago, when I first came to Astrakhan. I don’t mind fucked up places, not at all! But under the heavy rain it meant that every road became a river and the footpaths were muddy and slippery. When the rain stopped for a while, swarms of mosquitoes attacked. So I contended myself with a half-day visit and headed for Kazakhstan.

At the taxi stand, three Atyrau passengers turned up – too many for our car. They set in the next taxi due to depart. Railway workers started to pump water out of the train station, and the taxi stand slowly became an island. No passengers were to be seen. I was considering paying for the last seat when – after more than two hours of waiting – the driver finally lost patience. Within one hour we were at the border, having crossed decaying Russian backwater towns and an eternally improvised pontoon bridge.

The Russian border post at Karaosek looked intimidating. All drivers got a slip of paper, which had to be filled up with the required amount of stamps. Vehicles had to line up in individual, numbered slots. Each slot ended at a metal barricade with thorns, which was only lowered once all paperwork was done. All officials wore beekeeper’s hats, while the passengers were unprotected against the mosquito swarms. Everybody had to leave the car and queue for the passport check. Having entered Russia from Ukraine and visited Chechnya, I was prepared for another round of questioning. But this time, everything went smoothly: The border guard did not talk at all, and after five minutes, our car was through. On the Kazakh side, the same procedure at a slightly more welcoming border post. But the toilet was one of the worst I have ever seen.

I did not expect much of a change on the Kazakh side of the border. The area still belonged to Europe, and was ethnically mixed Kazakh and Russian, just like on the Russian side. But just after a few kilometres, a turtle crossed the road, then a camel, and the villages with its mudbrick buildings and the ugly mass of different poles and tubes looked distinctively different from Russia. A bit further on, we passed an old village on a hill next to a lake, on which long wooden boats were floating. Asia now felt very close.

Waiting for the flood – or the taxi to depart at Astrakhan train station. 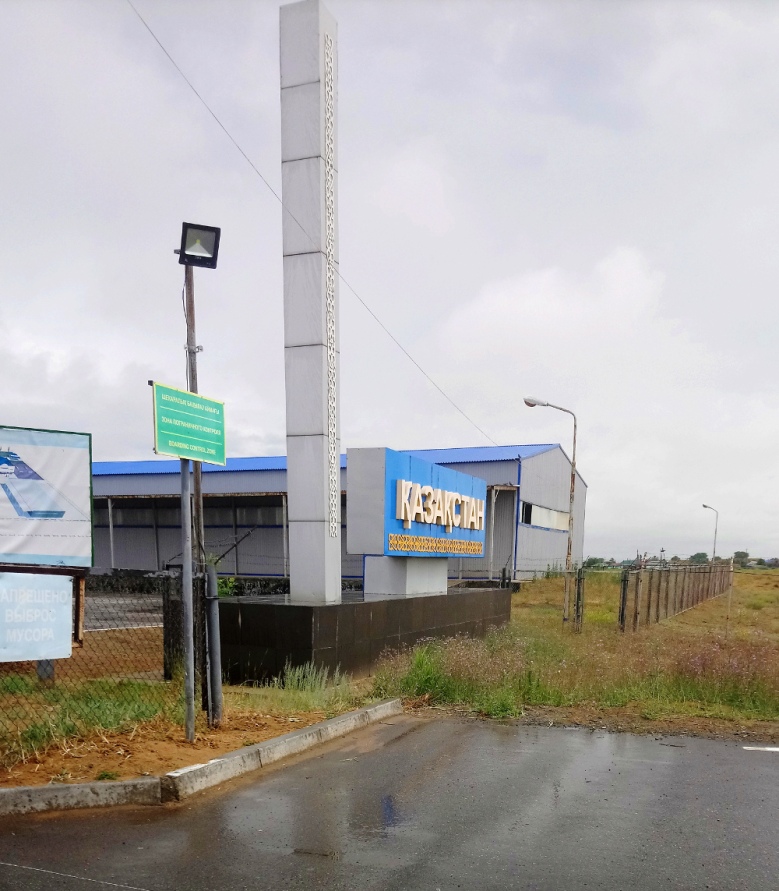