Zum Inhalt springen
The Southern Silk Road links the ancient cities south of Taklamakan desert. It is a rarely travelled route, and in Kashgar nobody could tell me if it was open to foreigners. Online, there only few and outdated accounts. Therefore, I share my own experience here. 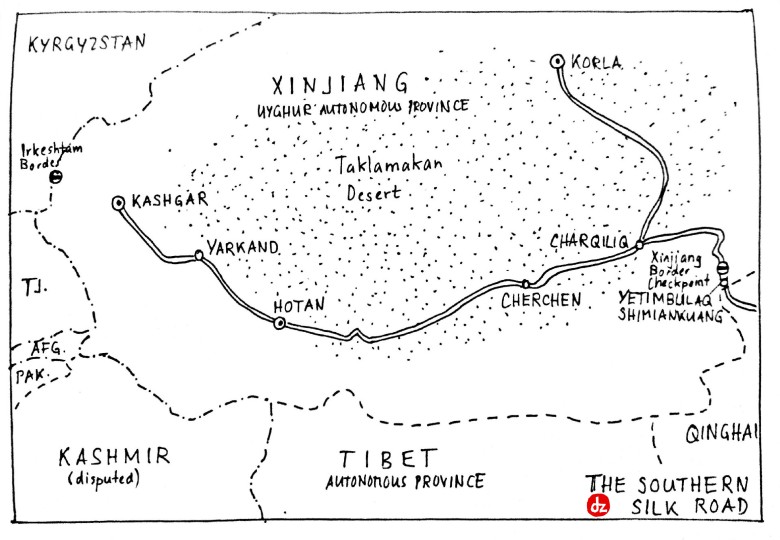 Practical Information
Security. Xinjiang, the Autonomous Province of the Uyghurs, is the tensest area of China. Uyghur separatists have been active since at least two decades, and recently also Islamism has become a problem. Violence happens also along the Southern Silk Road, the area with the highest percentage of Uyghurs of Xinjiang. In 2014, 96 persons have been killed during clashes in Yarkent, and in 2017 there was in incident in Hotan district, in which several persons have been stabbed. Generally speaking, however, the situation is calm: There are no obvious military operations going on, and terror attacks are less frequent than in Europe. The other side of the medal is that this security is tight, and police checks are extremely frequent. Passports/IDs are checked even when entering pedestrian areas, subways or public buildings. And there are multiple police checkpoints along the highways and even within some cities. Therefore, never leave the hotel without your passport! In my experience, the policemen are always polite and do not ask many questions. But there is no exceptional treatment for foreigners (except that the ID scanners only work with Chinese IDs), so  just do what everybody else does.
Red tape. Foreigners do not need a special permit to visit the Southern Silk Road cities, and neither was any kind of permit demanded when I continued into Qinghai (Huatugou). That being said, I have heard very recent accounts of foreigners being denied to travel from Korla to Charqiliq as well as from Xining or Golmud (Qinghai) to Huatugou. Furthermore, foreigners officially need an aliens’ travel permit issued by the Public Security Bureau (PSB) of Qinghai to enter Haixi District (adjacent to Xinjiang), but apparently this rule is de facto waived if they just transit and do not linger for too long. So it might be that I was just lucky. It is also possible that I just have taken the only possible route, or that those stopped have been unlucky. Anyway it seems that the rules are shifting and aren’t coherently applied.
Accommodation. Most hotels along the Southern Silk Road do not accept foreigners, but all cities have at least one option. Be aware that some Lonely Planet suggestions are no longer open for tourists. I stayed in the following hotels (prices as of July 2017): Hotel Delong, Yarkent (standard room 180 CNY); Hotel Wenzhou, Hotan (368 CNY); Hotel Yudu, Cherchen (120 CNY); Hotel Loulan, Charqiliq (288 CNY).
Language. Once I had left the Old Town Hostel in Kashgar, I did not meet any English speaker on the whole Southern Silk Route. With one exception: A Taiwanese in Cherchen, who was as astonished to find another tourist as I was. The main language of the region is Uyghur. Soon it turned out that years of consumption of Uzbek music (my favourites are Ziyoda and Shahzoda) had finally proved useful: Uzbek and Uyghur are very closely related. Although I had never actively spoken Uzbek, it took little to make myself understood. However, there is a Han Chinese minority in the area, and all hotel employees belong to that minority. Interestingly, they did not understand a single word of Uyghur, and my command of Chinese is also rather non-existing. I downloaded the offline-version of the Google Translate app for that reason, which proved quite helpful.

This is my personal impression of the visited places. For more structured and sightseeing-oriented information, check Lonely Planet. The last edition has been published in June 2017, but a significant part of the information on the Southern Silk Road (accommodation, transport) has quite obviously not been updated and is not always true. 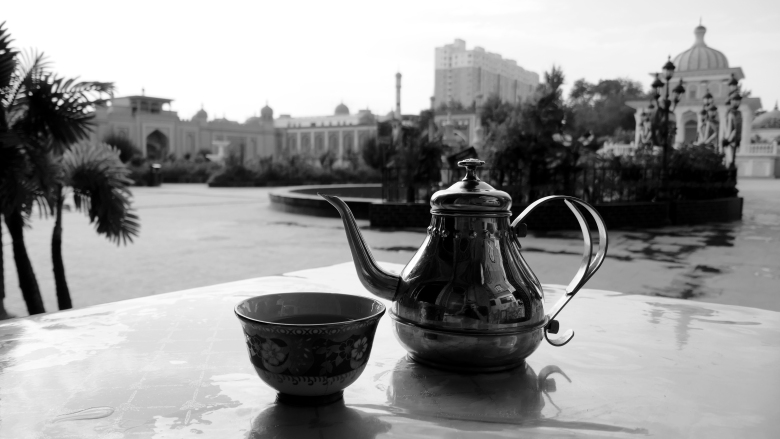 Yarkand is a divided city: The West belongs to the Han Chinese, the East to the Uyghurs. Yarkand has a substantial old town in the eastern part, which has not (yet) been torn down and rebuilt. Here, the Silk Road past becomes palpable as nowhere else in the area. There is a bazaar and stalls with freshly prepared food, and, most notable: several ice cream parlours. People sit in front of huge piles of ice cream, which miraculously do not melt. Narrow, crooked lanes lead through the residential quarters and leave a lot to discover. The main square with its mosques, however, has already been rebuilt. Now it looks a bit like a cheap copy of the famous Meydan-e-Emam square in Iran’s Esfahan, with a minor difference: Most buildings are quite obviously new, and there are no people. Nevertheless I sat down to drink a tea. The Uyghurs drink white tea (ak çay), and it was for free. “Usually it goes complimentary with the food, but since you did not eat anything, it is for free”, the owner of the place explained to me. 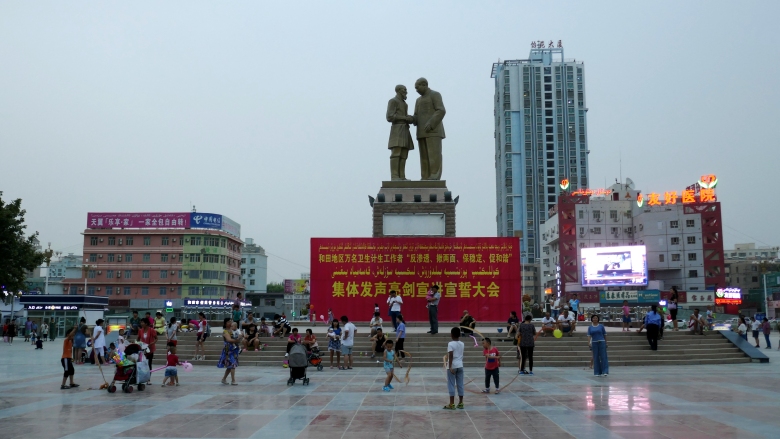 I spent most of my time in Hotan researching for onward travel to Cherchen, crisscrossing the city due to wrong information given by well-meaning locals. So here I share the result: There is only one daily bus to Cherchen, and it departs at 10 am. No matter what locals say, it does not leave from the long distance terminal, but from a smaller station in the East. To taxi drivers, this station is known as Lopbiket, and that info is essential to find it. Besides that, I found Hotan to be a dusty and featureless desert town, dotted with the standard array of modern high-rise buildings of any mid-sized Chinese city. Unlike in Yarkand, there is almost no historical architecture left, apart from a couple of old town streets. Even the famous Sunday Bazaar I found half-empty. The city obviously has lost its Uyghur character. Apart from one feature: On the main square, a huge statue shows Mao shaking hands with an Uyghur leader. 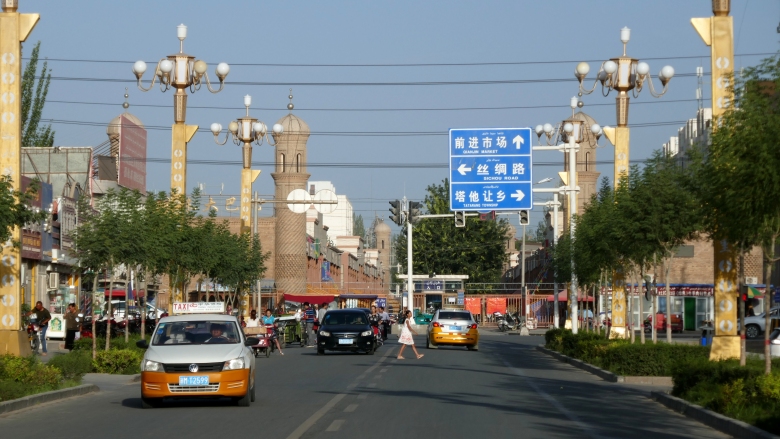 Cherchen is an empty, modern town at the edge of the desert. It is populated almost exclusively by Uyghurs, but it shows no Central Asian features. If there has been an old town once, it is long gone. Cherchen now encompasses all institutions which belong to a Chinese city, such as a (heavily guarded) park or a pedestrian area. So it is clean and proper. But there is nothing at all which makes the place unique. So only two memories remain: That we were all blocked inside the bus station after the arrival of our bus late at night, and only let out once the police had checked all our identity papers. And that the food was excellent, especially the spicy noodle soup I had at a Han Chinese place even later at night. 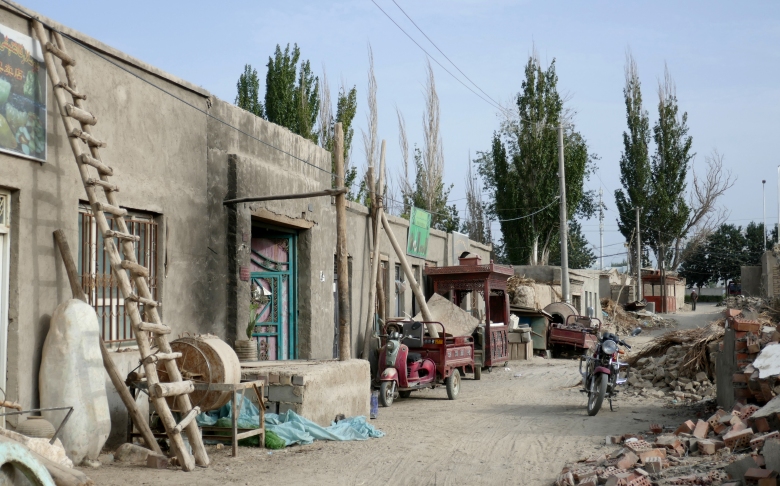 On a first glance, Charqılıq resembles Cherchen. On a closer look, it revealed unique attractions such as the Loulan Park. This park was erected as a substitute for the removed old town, showing the cultural features of the Southern Silk Road area in a kitschy way, which is usual for such efforts by the Chinese. The core of the park is an artificial mountain with the face of a lady carved in it. I was unsure whether the park was still under construction or already in decay, but most probably both. Next to the park are the ruins of the old town. When I visited, some houses were still standing and even inhabited, giving a rare insight into the original architecture of this area. Right outside Charqılıq, there is a very similar settlement, which however has been recently refurbished and looks impressively proper. The inhabitants eyed me suspiciously while I was wandering around. I could not find out why this place was treated so well, while the old town was destroyed.

With the cities becoming increasingly Chinese in appearance, the real pleasure of the Southern Silk Road lies on the road itself. In its Western part, from Kashgar to Hotan, the countryside reminds very much of Uzbekistan. There are fertile oasis villages with one-storey mudbrick buildings. For some reason, the Uyghurs store their junk on the roofs of those buildings, so the settlements look pretty ramshackle. From Hotan eastwards, the road leads through the Taklamakan desert, and settlements become very rare. The Taklamakan is the world’s driest place and it is impressive, how diverse it is nevertheless. During the toilet stops, I was by far not the only one who went around to take pictures. The landscape looks surreal, especially during twilight – there were some very long bus rides. And every drop of water seems to add much colour. Unfortunately, also every drop of garbage – littering is still a serious problem with the Chinese. 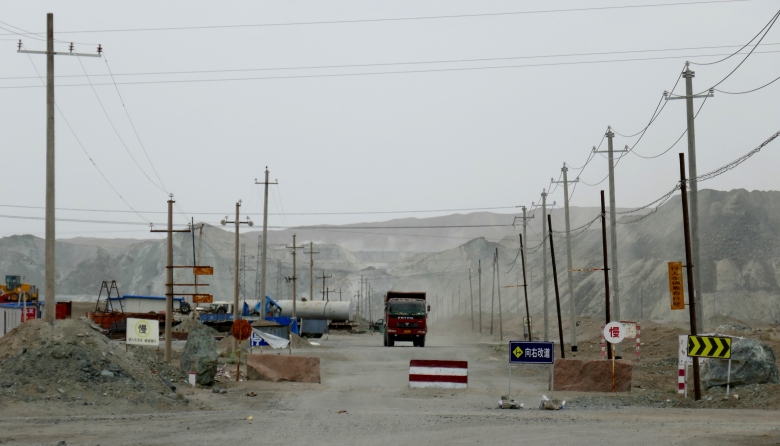 Strictly speaking, Yetımbulaq does not belong to the Southern Silk Road, which crosses the Taklamakan northwards to Korla after Charqılıq. But it is on its prolongation, if you want to continue towards Qinghai. The road from Charqılıq to Qinghai leads over a high, desert-like high mountain range, which I found intriguing because in the Western world and even in central China, most people probably never have heard of it. The last Xinjiang town along that road is situated at the watershed and bears the Uyghuric name of Yetımbulaq, which means “Seven Sources”. The Chinese name, Shimiankuang, is more honest: it translates as “Asbestos Mine”, and that mine is the only reason for the existence of the settlement. Asbestos Mine looks hellish, with crumbling brick buildings, a miserable market street and huge heaps of mine rubble looming on the horizon. Oh, and it is also very windy and dusty, which in a town called Asbestos Mine is probably not very promising for your health.