Zum Inhalt springen
A true border experience: I had no idea how to get to that remote border post, and neither how to get away again. But Timor-Leste’s Oecussi exclave was a revelation – one of the most beautiful spots of this trip!

Coming from: Napan, Nusa Tenggara Timor, Indonesia
Going to: Bobometa, Oecussi-Ambeno District, Democratic Republic of Timor-Leste
Documents required: Passport – both countries have recently adapted a visa-free policy for Europeans, which makes trips to the exclave of Oecussi much easier.
Waiting time: 5 min (Indonesia), 3 min (Timor-Leste)
Distance from Kupang: 216 km
Rating: 9/10
From Indonesia I crossed into Oecussi-Ambeno, an exclave of Timor-Leste in the western part of Timor Island. It was a border which had it all what I like so much about borders – and travelling in general: A bit of adventure, some unexpected events, not too much bureaucracy, small talk with officials – briefly: exploring. The border was very remote, and information about it was not easy to obtain. It was only the second border (after #16 Kazakhstan-Kyrgyzstan) of which I did not know how to get there and how to get away again. But Timor was much more unfamiliar to me than the former Soviet Union… So here are my findings

A. Getting to the border (Indonesia)

Public transport in both parts of Timor is colourful, loud and uncomfortable. Within Kupang city, Bemos are ubiquitous: Minivans converted into minibuses, with fancy decorations and impressive sound systems. “Warning – this is an audio car” advert stickers above the entrance. Inter-city routes are served by small buses. They have worse sound systems, but are as loud as Bemos.

Such a small bus was the option of choice for the first leg, the almost 200 kilometres to Kefamenanu, short: Kefa. The buses to Kefa leave Kupang’s tiny terminal when full. Kefa is not far from Kupang and the roads are excellent, although never straight. Still it took me six hours to get there. We could have made it in four, but the driver chose to first linger around the suburbs of Kupang for more than an hour and then to have an extended lunch break at a restaurant of his choice – Southeast Asian public transport as usual, that is. But when we finally arrived in Kefa, I was happy to leave the crammed bus, as I had been squeezed between other passengers, luggage, and hens.

These buses travel from Kupang to Kefamenanu, Atambua and other towns.

Kefa is a dusty highland town which made a grim impression. That impression was highlighted by the welcome I got at the bus station: Within no time, I was surrounded by a group of young men who were screaming at me in Tetum and Indonesian and trying to convince me to pay high prices for a trip to the nearby Napan border with their respective vehicles. There were no Bemos, they insisted (which was not true, as I found out later). In the end, I simply shouted the price I was willing to pay, and one less offensive driver in the last row agreed.

It was the third popular way of transport I got: an Ojek, a motorbike-taxi. Off we went on his motorbike, crossing a row of hills towards the border. Sitting at the back of a motorbike is not much fun when you wear two backpacks; the steep uphill parts were the worst. The hills looked beautiful, but dry and dusty, and we were mostly alone on the road. I started to wonder if there was any onward transport from the border. The crossing was 29 kilometres to the main town of Oecussi-Ambeno, I distance I did not fancy walking.

I was quite relieved when I saw crowds of people and – obviously – Bemos and Ojeks hanging around at the border. 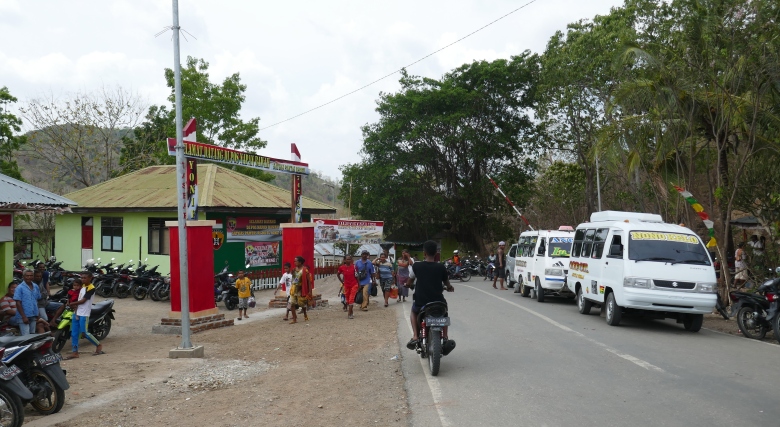 B. Crossing from Indonesia into Timor-Leste 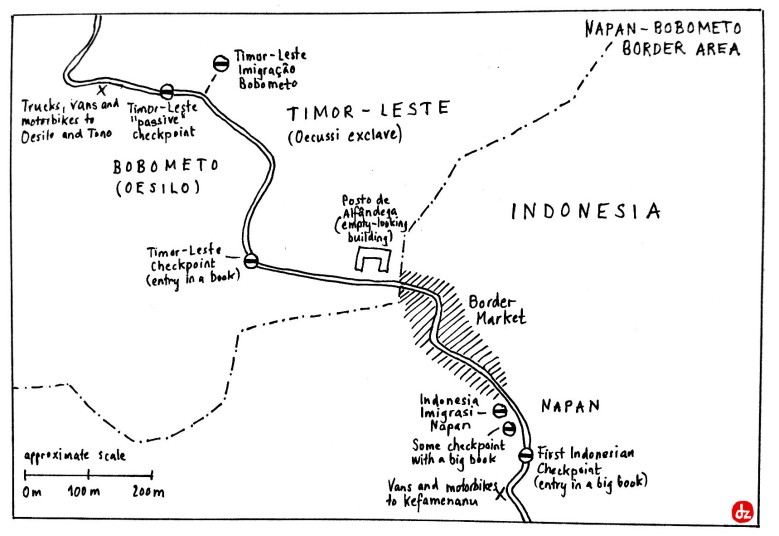 As it turned out, the crowd was not there to cross the border. They went shopping at a makeshift market between the two checkpoints! I was quite surprised to find that. The market was so crowded that it took me a while to get through. I couldn’t imagine how a vehicle would cross! Apparently, the people from both sides can visit the market without any controls, which meant that I was almost alone at the bureaucratic checkpoints. And there were plenty of them:

Market between the Indonesian and the Timorese border checkpoints

Getting away from the border (Timor-Leste)

Thanks to the border market, getting away from the border was no challenge. Numerous Bemos, Ojeks and passenger trucks were waiting. None of them went all the way down to Oecussi’s main town of Pante Macassar though. But I found a Bemo bound for Pasar Tone, 10 kilometres from Pante Macassar.

Immediately after the border it became evident that Timor-Leste looks profoundly different than the Indonesian part of the island. Mainly because the road became very narrow and bumpy: The 16 kilometres to Pasar Tone took more than an hour! The slow speed gave me time to have a closer look at the countryside. I was surprised that most houses looked quite traditional: Made of palm and bamboo wood, with thatched roofs – very different from the nondescript brick-and-corrugated-iron cubes across the border. Also, the road was not lined with hundreds of shops and small restaurants like almost everywhere in Southeast Asia, but felt truly rural.

My travel company were mostly women from the nearby villages, who had been to the market – with the respective amount of luggage. They smiled at me in a friendly way and even tried to converse a bit, but we found no common language. The Bemo which finally brought me from Pasar Tone to Pante Macassar was a different story: I travelled with a bunch of young men which could not stop giggling just because of my presence. And the driver even beat his Indonesian workmates regarding the volume of the music.

I had left my hotel in Kupang at 6.20 a.m. and reached Pante Macassar shortly before 6 p.m., having travelled a distance of just 245 kilometres. I was exhausted, longing for a shower and a cold beer. But I had to earn that one: I had booked a hotel, but they had given me no indication about the location, and it was also nowhere to be found on online maps. When an Ojek driver showed me the way, I found the place deserted – and very far away from the tiny town centre. So I went back, found a room in another hotel and then finally could hit the inviting Moxito bar at the beach.

It was unlike any other place I had been in the last couple of weeks: A strand bar and restaurant below palm trees, directly at Pante Macassar’s lovely beach. The meeting place of the local Portuguese diaspora, as I later found out. It felt good to finally get a cold Bintang beer – and Indonesian lager, which must have travelled the same way as I had. 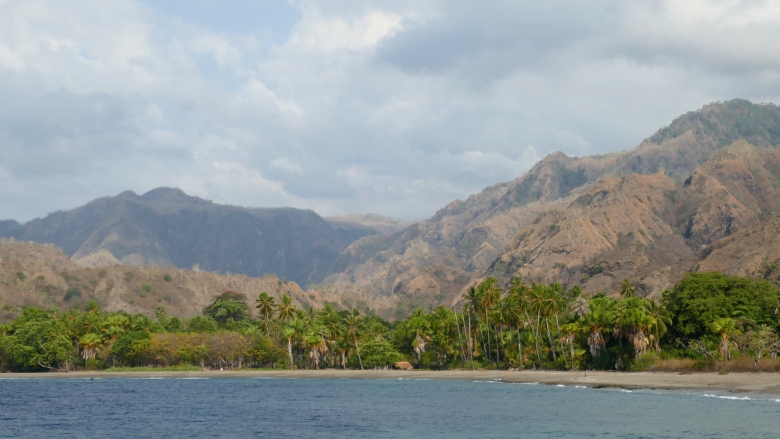 An impression of Oecussi’s landscape

Practical Information:
Transport: Minivans (bemos) and motorbike-taxis (ojeks, 50.000 IDR) travel between Kefamenanu’s bus station and Napan border. On the East Timorese side, bemos link the border with Pasar Tone (1 hour, 1 USD), with links to Pante Macassar (30 min, 0.50 USD). Ojeks are also waiting and would do the trip to Pante Macassar for 10 USD.
Accommodation: There are no hotels directly at the border. The nearest places for accommodation are Kefamenanu and Pante Macassar. Both towns have several hotels, but it’s not possible to book them online. I stayed in Hotel Royal Rao in Pante Macassar’s town centre (rooms/deluxe rooms for 15/45 USD); I was happy with it. There are several more hotels and guesthouses around Royal Rao, so it’s probably not too difficult to find a place to sleep. Amasat Guesthouse (suggested by Lonely Planet) is located 3 km east of the town centre at the beach, close to the port.
Food: A lot of food is on display on the border market, but no restaurant nearby.
Money exchange: Informal money change is possible on the border market. There is no formal exchange office or bank. But it is easy to get “East Timorese” money abroad, since they use US Dollar banknotes (but have their own coins).
Opening hours: The border is closed on Sundays.