A wooden shack, a one-woman-immigration check, no digitalization: Welcome to Funafuti, one of the world’s remotest international airports.

Coming from: Nausori Airport, Suva, Fiji
Going to: Funafuti International Airport, Fongafale, Tuvalu
Documents required: Passport
Waiting time: 5 min (Fiji), 5 min (Tuvalu)
Rating: 8/10
We were waiting in a packed little room. One person after the other passed by the single immigration desk: A wooden table with a couple of stamps, passports and forms on it – no computer. The lady was handling entry and departure at the same time: Those passing on her right were entering, those on her left leaving the country. There were two different stamps (one with a date on it, one without), and she did not confuse them.

Everybody had filled out the four parts of the immigration form. These meant that after the immigration desk, we also had to say hello to ladies representing health check, quarantine and customs – all in the same room. But then it became even more confusing: Once the luggage was dumped in front of the wooden hut, everybody who had already been processed streamed back through the immigration room, collecting their bags.

What felt like a remote border post somewhere at the edge of the desert or high up in the mountains was in fact an international airport: Funafuti International Airport, located on the capital atoll of the island nation of Tuvalu. The name was however the only international thing about it. Outside of the hut, there was no parking, no taxi drivers – just a gravel path and the construction site of a future, not much bigger airport building. The modest houses that surrounded the airport hut were the National Bank of Tuvalu, the Parliament (a simple and empty pavilion), and the seat of the government. It made me happy: In a world where all airports look the same and immigration checks are standardised, Tuvalu’s airport still retained the charm of a remote border. 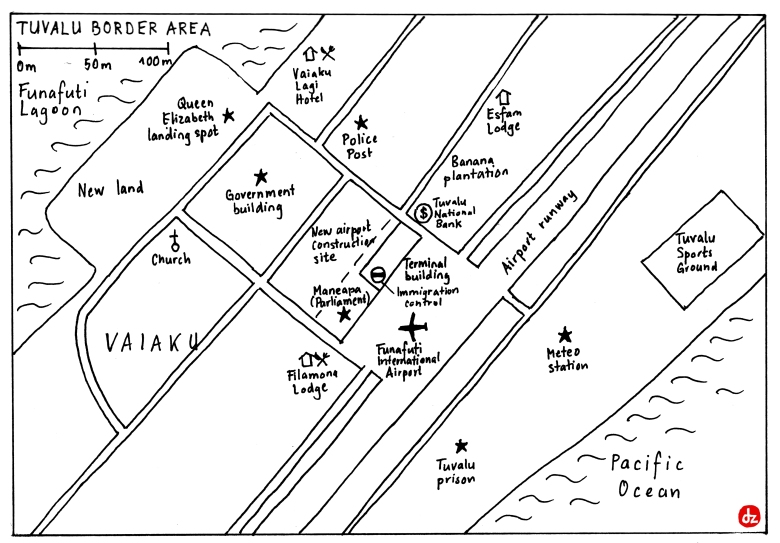 And remote it is: Just look at a map and you’ll see. Only three airplanes per week land at Funafuti International Airport: All coming from Fiji’s capital, Suva. Tuvalu has no inland flights. The country comprises nine atolls, all quite distant from each other, and linked only by ship. And even the flight from Fiji is unreliable: Strong winds, overbooking and fuel shortages often make the trip impossible altogether. 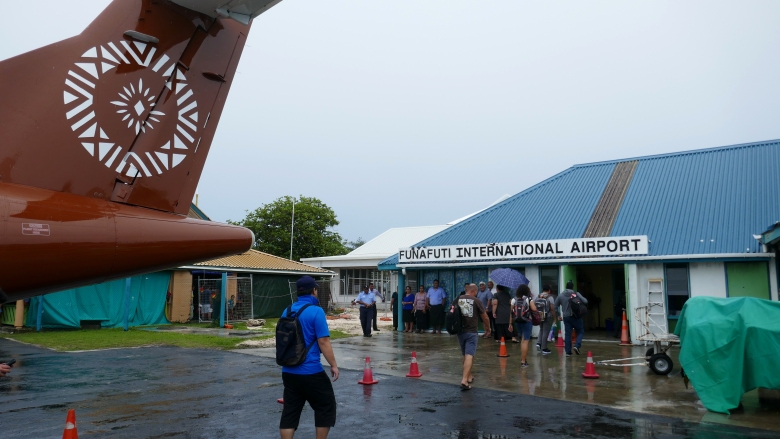 But Funafuti airport has other functions. For the locals, the runway is a favourite hangout. They play Te Ano (the local version of volleyball), chat with friends, or simply have a nap. After all, the quite appropriate airport code is: FUN. In one tragic incident, a person sleeping on the tarmac has been run over – by a car, not a plane. People know when the airplanes land, and the firefighters make sure nobody gets hit.

Leaving Tuvalu was an equally endearing affair. The day a plane arrives and leaves again, the airport becomes the centre of action on Funafuti. Souvenir stalls are erected in front of it, selling traditional shell and flower necklaces. Those accompanying a family member or friend to the airport adorn the person leaving with them, and once the departing passengers reach the departure lounge, they are all heavily laden with shells and flowers around their neck.

Check-in already opened at 8.30 am, although my plane left only at 12.30 pm. I used the opportunity to dump my luggage and take a final stroll around the village. And I went to the post office to send some post cards. The post office mainly deals with philatelists, so the only post cards they sell show… post stamps! (And the Tuvaluan post stamps are clearly made for trading – they show motives with no connection to Tuvalu whatsoever, such as “New York’s Skyline”, “Star Trek” or camels.)

Funafuti International Airport the day of my departure. The white building in the background is the government office, the pavillon to the left is the venue for parliament assemblies.

At some point, walking on the runway (!), I noticed that immigration had opened. So I finally went to my hotel to fetch the hand luggage, returned to the airport and got a quite nostalgic stamp – it must have been in use since 50 years. The date was entered by hand! After that check, I waited a little in the departure lounge. But soon I realized that people still walked in and out of the building, so I quickly went to the National Bank next door to change my last Australian Dollars into Fijian currency.

In the end, more and more passengers gathered in the departure lounge, and I expected boarding soon. But suddenly, sirens howled and several trucks were driving back and forth on the runway: The plane’s landing was due, and they made sure nobody was left playing on the runway. At the same time, the airport employees chased the passengers out of the building. Just two minutes later, the plane landed – and after it, traffic poured back on the runway. To re-enter the terminal building, we finally had to go through a very superficial security check, and then we entered the plane.

And then, the passport party was finally over: While we were taking off, people standing along the runway waved at us. Half a minute later, seeing Funafuti from the air was impressive: Only from this perspective the shape of the atoll, the string of islands and the different water colour of the lagoon became visible. After three minutes of flight, we lost sight of the atoll. Until the last second, Tuvalu had been a true highlight!

A last view of Funafuti Atoll

Practical Information:
Entry requirements: Most nationalities get a 30 day stay permit upon arrival, which is a normal passport stamp.
Transport: Three planes per week link Funafuti with Fiji’s Nausori airport close to Suva. Book early, as flights sell out quickly. And reconfirm the departure of the flight prior to going to the airport – apparently it’s called off quite often. Therefore, plan in some days of spare time in case of delays. Fongafale Island has a road network of 8 km – Tuvalu’s only roads. Within the settlement, it’s very easy to get around by foot. To visit the tips of the island, rent a motorbike (10 AUD) at one of the lodges or at private rental agencies – just ask around.
Accommodation: There is one hotel right next to the airport: Vaiaku Lagoon Hotel (also called Vaiaku Lagi Hotel). It is the only real hotel on the island, run by the government, and rooms go for 120 AUD per night. Two “lodges” are next to the airport: Filemona and Esfam (approx.. 80 AUD), and a couple more some hundreds of meters north of it. Book in advance, as all options are often full.
Food: Tuvalu is no culinary paradise. The local cuisine is good, but unfortunately it is not served in restaurants. Most restaurants are run by Chinese and offer rather bland Chinese food, such as 3TS (reputedly the best Chinese option), Ocean Breeze or Fast Food. Vaiaku Lagoon Hotel and Filemona Lodge also serve lunch and dinner. I liked most the tuna steak at Filemona Lodge.
Money exchange: There are two banks next to Funafuti airport. The National Bank of Tuvalu does change money, but they also might be short on cash, so don’t count on it. Neither on credit cards: Bring a large supply of cash. Tuvalu uses the Australian Dollar, and some own coins minted in the 1980s and 1990s – watch out for the adorable 50 cents coin with the octopus.
Communication: Tuvalu Telecom has no roaming agreements, so foreign SIM cards won’t work. At the time of my visit, Tuvalu Telecom had run out of SIM cards, so buying one was also no option. Wifi cards were available, at 20 AUD for 600 MB (valid 14 days). Those cards are usable at various hotspots throughout the country. However, internet is very slow and not always working.

Walking the Isenriet, the large plain in Rhine Valley #🇨🇭 #rheintal #kriessern #isenriet #wanderlust #hiking #spacer #aroundtheworld #myswitzerland #visitswitzerland #goodevening
As a child I was told that Samichlaus (the Swiss Santa Claus) lives deep in the forest. From the window of my room, I identified a very lonely house almost at the top of the hill behind my village, surrounded by forest, and assumed that this must be his dwelling. It never crossed my mind to go up there and see - until today. Turns out it is the holiday home of some people from Zurich... But a nice place with a great view. #🇨🇭 #rheintal #oberegg #myswitzerland #visitswitzerland #rebstein #hike #hiking #explore #wanderlust #wanderung #schweiz #swiss
Border tripoint of the cantons of St. Gallen, Appenzell I.Rh. and Appenzell A.Rh. close to Landmark restaurant on Ruppen pass. Read more on the border tripoint hike on my blog passportparty.ch #linkinbio #passportparty #bordercrossing #borderzone #tripoint #borderlands #rheintal #ruppen #appenzell #switzerland #suisse #schweiz #myswitzerland #swiss #exploretheplanet #wanderlust #hiking #hikingadventures #borderstone
Somewhat sceptical cats observing me from the border barricade after coming back from running #🇨🇾 #catsofcyprus #cats #nicosia #lefkosia #ceasefire #barricade #warzone #bordercrossing #borderlands #runnung #visitcyprus