Zum Inhalt springen
China has lot of white spots on the map: Places about which guidebooks, Google or Wikipedia can’t tell you much. I went to discover one of them: Zhaotong.

What I like most about China is that it leaves that much to discover. In newspapers and books, I often stumble upon names of places I have never heard of. When I then check, it turns out that the respective city has several millions inhabitants, and that it is the capital of a province whose name I’ve neither heard of. Delving deeper into that province, a whole new country reveals itself: With overpopulated cities and remote areas, great sights and vast industrial areas, with ethnic minorities and strange borderlands.

China is one of the rare lands where whole areas and rather big cities remain almost undocumented by Western media and books. Going to these places is still a little bit of an adventure: Having no idea about the place, exploring will definitely be a surprise. I had wanted to visit such a place for a long time, and on the Passport Party trip I finally set out to: Zhaotong, Yunnan Province.

Impossible to know in advance. Lonely Planet’s coverage of China is impressive: The 2017 version of the guidebook has 1.057 pages. 64 of them are about the province of Yunnan alone, which is among the top tourist areas of China. But Lonely Planet does not mention Zhaotong and the whole Northeast of Yunnan. Neither do Wikitravel or Wikivoyage. A picture search on Google mainly brought nature photos. So I consulted Wikipedia: There are two meagre articles (so called ‘stubs’) about Zhaotong municipality and Zhaoyang district. No information at all about what there is to see or even how to get there.

What did I expect?

China is a huge country with lots of big cities about which Western media and guidebooks do not care. In that sense, Zhaotong is far from being anything special. And precisely that made it attractive to me: I expected to find an average, mid-sized Chinese town which did not care about tourism. A place, which is ideal to get a grasp of the normal everyday life in China – without the distraction sightseeing or other attractions. So I expected the usual arrangement of modern and semi-modern buildings, wide streets and the standard infrastructure such as some parks, a culture palace and a commercialized pedestrian area. If I was lucky, there would maybe be some industry or a street with older buildings, and certainly some Socialist-era apartment blocks.

What did I find?

The valley which led up to Zhaotong looked just awful. It was narrow and dark, and all houses were squeezed in between the road and the river. They looked very bare and grey, with garbage around them. We followed that horrible valley for a full afternoon and I had the impression that even the Chinese were a bit shock about the appearance of their own country – I had not come across such a miserable area before. 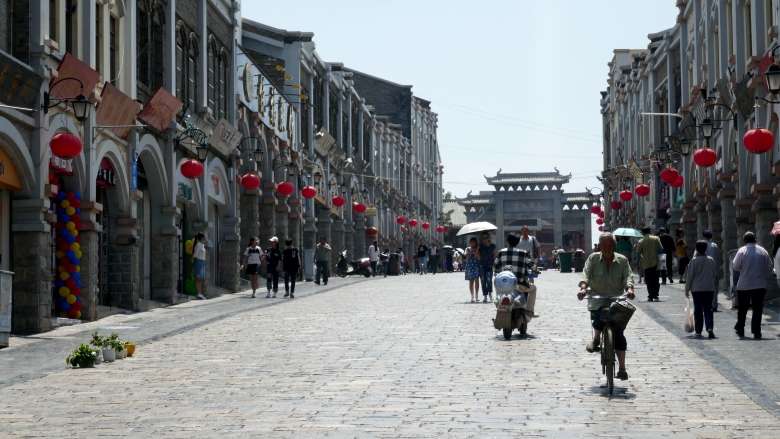 Zhaotong came as a big surprise. The city has a real old town core, with lively pedestrian areas, markets and narrow and crooked lanes. I had never seen this before in China, except for Disneyland-like places like Songpan, where it had been made up to attract tourists. Probably there is also fake architecture in Zhaotong, but there were no tourists at all – the normal, everyday city life took place in that old town. Almost like in Europe. 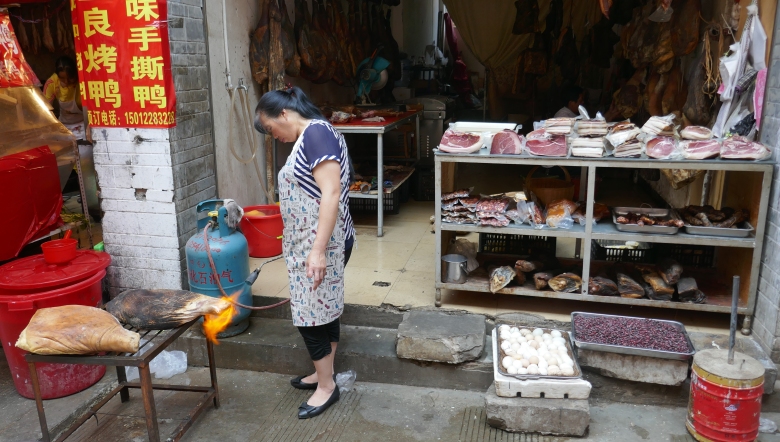 Even more like in Europe was the local delicacy: Yunnan ham. On the market, I found many shops with ceilings full of black cured ham. It smelt like in Spain! They even sold sausages and bacon which looked like in Southern Europe. But there was one important difference: The black color of the ham did not hail from a black pork breed, such as the Cerdo Ibérico (“Pata Negra”) in Spain. It was just produced by burning the ham with a Bunsen burner. A Spanish friend later told me that in China, efforts are underway to fake Pata Negra ham.

No. My thrill of going to Zhaotong was to explore the undiscovered. With this little report, I have spoilt that a bit. But there are plenty of similar places, white dots on China’s map, which wait to be discovered.