Zum Inhalt springen
A jungle border, in the extreme North of both countries. But still not off the beaten track - there were far more tourists than locals in the cross-border bus.

The base for crossing there is the little town of Muang Khua. Muang Khua enjoys an attractive location at the confluence of two muddy jungle rivers, but is not attractive for itself: A typical ramshackle third world town. The 100 km from Udomxai to Muang Khua had taken four hours by bus: People were moving large sacks of market goods, live animals and even a refrigerator on the roof of the bus, and the generally relaxed attitude of the Lao people also translated into the speed of this trip. Many times we had to stop to load and unload. Heavy rain was pouring down, and by the time we arrived to Muang Khua, my backpack was soaked.

Muang Khua was a bit like the last outpost of civilization in the middle of the jungle of Northern Laos. For onward transportation, travellers had to change to river boats here. But there were plenty of guesthouses. I chose one and went for a walk – and I discovered that I was by far not the only tourist in town. All restaurants and pubs were full with Europeans. Indeed, the next early morning, in the bus to Vietnam, I counted only two locals. The rest were backpackers from France, Italy and the Netherlands. Not that I would complain – I was one of them, obviously. But after China, where I had large cities all to myself, it came a bit as a shock to find such a remote place so touristic.

Stuck in a landslide: Busses on the road to the Vietnamese border

The main challenge of this border was neither bureaucracy nor any crowds, but the heavy rain. Close to the village of Muang La, it had caused several landslides, and finally we reached a rather intimidating one: Mud and Rocks were constantly falling down onto the road, which was already covered with debris. Nevertheless, our driver dauntlessly hit the road, and quite predictably we got stuck. After a while, another bus managed to pull us out and we continued our way through fog and rain towards the jungle border.

Laos seems to be the Kyrgyzstan of Southeast Asia, its border guards being very polite, quick and undemanding. In Pang Hok again, I got my stamp in just a minute, and there was no luggage check. There was one little demand nevertheless: I should pay 10.000 Kip (ca. 1.20 EUR) for crossing the border on a weekend. That smelled a lot like bribery and I also got no receipt. But everybody paid, including the locals, so there was no point in protesting. But when a restaurant owner just after the border crossing wanted 5.000 Kip for the use of his stinking latrine, I refused in view of the forest behind said restaurant. 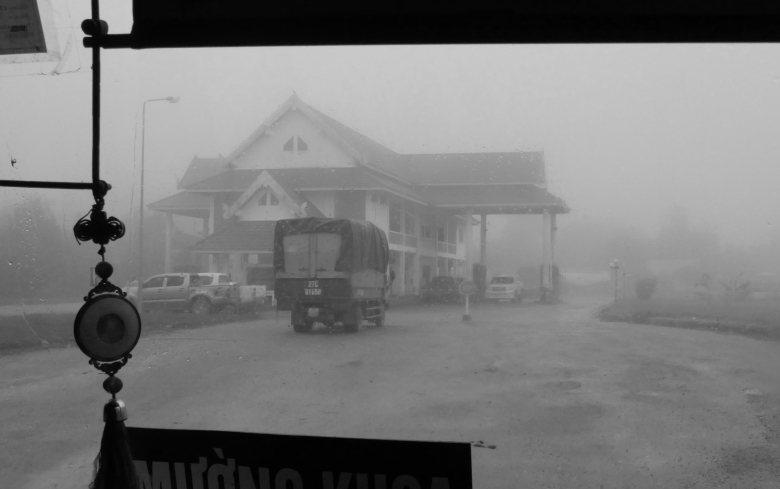 Five kilometres separate Pang Hok, the Lao checkpoint, from the Vietnamese side in Tay Trang. The actual border is in between. And it becomes immediately evident, since the road on the Vietnamese side is so much worse than in Laos. This came a bit as a surprise, since richer Vietnam had sponsored a new border terminal on the Lao side – why didn’t they spend the money to build a proper road on their side?

The passport check was again a quick affair. The room was rather crowded and the Vietnamese showed that their queuing discipline is not an English one, but in the same occasion they also showed that they possessed an impressive range of different documents entitling them to cross the border: Actual passports, “Vietnam-Lao Cross-Border Passports”, ID cards and in one case also a simple A4 printout that apparently was sufficient.

Also among the tourists, there was a bit of confusion. Vietnam has introduced visa-free travel for a couple of European states. This however only applies for the big and powerful countries such as Germany, so with my Swiss passport I still needed a visa. Online visa are exclusively available for those flying into Vietnam. So in the Chinese city of Kunming, I visited the Vietnamese consulate, which was located on the fifth floor of a hotel. At least, the procedure was not bureaucratic and rather quick, they had a same-day service. Quite expensive, however – they took 500 CNY (ca. 70 EUR). On the other side, the Swiss passport was an advantage in Laos, which allows us visa-free entry. Most nationalities need a visa there, but it is easily obtained at the border.

From the border it was a half hours drive down to Dien Bien Phu, the first Vietnamese city. When I arrived, it was heavily raining and all shops were closed. I decided to splurge on the number one recommended restaurant on TripAdvisor, just to find it shut down. The fried rice I got instead didn’t convince me that Vietnam is Southeast Asia’s culinary gem, as Lonely Planet advertises. I hope other places in Vietnam will do.

Practical Information:
Transport: A bus to Dien Bien Phu leaves Muang Khua daily at 7.30 am (60.000 Kip). It does not depart from Muang Khua’s bus station, which is 2km out of town, but from a parking lot between the central road junction and the Namphak bridge. Also other Lao towns have regular buses to Dien Bien Phu: Udomxai, Luang Namtha, Bokeo, Phongsali, Nhat U and Luang Prabang. Buses from Dien Bien Phu to those places leave between 5.30 am (for Muang Khua) and 7.30 am. Since there are no villages next to the border checkpoints, there is no transport going just to the checkpoints, only through buses.
Accommodation: Muang Khua has one hotel (Sernalli) and several guesthouses, all along the main road. Dien Bien Phu has a lot of hotels and guest houses in all price ranges. I saw no accommodation between these two towns.
Food: Pang Hok, the Lao border settlement, has several restaurants. There is also a food stall next to the Vietnamese checkpoint. In Muang Khua, there are two restaurants which are mainly frequented by backpackers: Saifon and Sabaidee, plus several snack bars and pub. In Dien Bien Phu, there are several restaurants and cafés along P. Nguyen Chi Tranh. Unfortunately, I found Yen Ninh Vegetarian Restaurant closed, the best rated on TripAdvisor.
Money change: There is no money exchange at the border checkpoints (maybe the restaurants on the Lao side do, I didn’t ask). Banks in Muang Khua and Dien Bien Phu change USD into the respective local currency. On weekends, they are closed, but I found the ATMs working in Dien Bien Phu – charging a whopping 3% of the withdrawn amount, however.
Opening times: The border is open daily including weekends, although the Lao side levies a 10.000 Kip weekend charge. I do not know the exact opening times, but when the busses are passing, the border is open.