Zum Inhalt springen
At its backdoor, Thailand did not show its model face. But Cambodia was proper enough, with a post-Soviet-style resort for Chinese tourists.

The Chinese tourists stay at Koh Kong Resort, which most likely targets diaspora Chinese in Southeast Asia. All signs are in Chinese only, all prices in Thai Baht. The neo-baroque main building looks like the President’s palace of a Central Asian dictatorship, and the bizarre kitschy interior follows that line. Several rainy seasons have, however, left patina. The beach looked quite attractive and ended close to the border wall with Thailand. This was finally a beach resort where I could imagine spending a couple of days (or hours, at least)! But I passed by during rainy season and the beach was really not tempting.

Strolling through the border settlement was fun. Apart from the resort, there was everything which belongs to a border: A special economic zone where apparently the Mikasa volleyballs are manufactured, a casino, a duty-free shopping mall and quite surprisingly even a “Koh Kong Safari World”. Immediately at the border, there are many food stalls, and motorbike and tuk-tuk drivers wait for passengers. The grandly named “Koh Kong Avenue”, however, was underwhelming. It was just a double row of mostly closed shops. Behind that Avenue I found a real border wall, whose crenellations looked outright medieval – but this was probably again the tropic-induced patina.

Regarding my experience when entering “Scambodia” (see border 29), this time I had refrained from using any tourist-oriented transport. There was such an option, a bus to Bangkok by infamous Rith Mony Company which leaves Koh Kong town daily at noon. Doing the whole trip individually again involved many stages. But this time, I decided myself about them, paid less and travelled faster. Plus it gave me the time to have a closer look at the border towns. 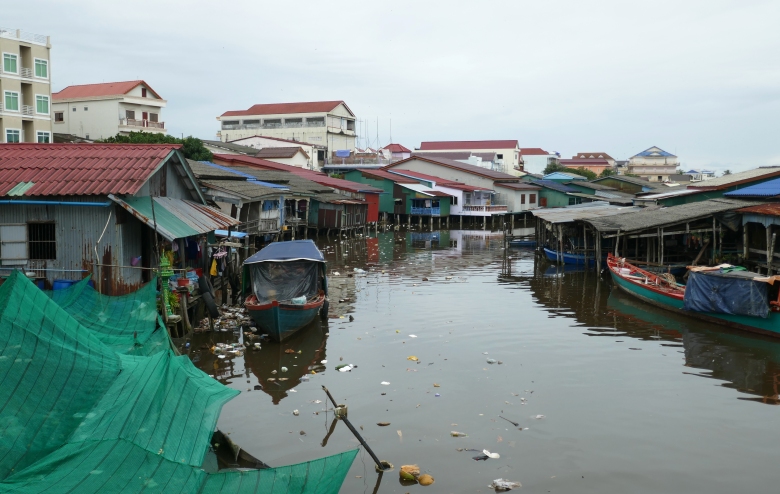 Which was interesting the case of Cham Yeam directly at the border, but the nearby town of Koh Kong I found to be quite a shithole. There are some potentially nice spots, especially the stilt houses along the river. But the river is filled up with garbage and stinks horribly. Garbage abounds also in the featureless rest of the town centre and along the promenade, where cows and goats graze. Surprisingly, several Western expats live in the town and run their bars and restaurants. “Fat Sam’s” is the most famous, looking as miserably as the rest of the town (but the food and service appear to be good!). 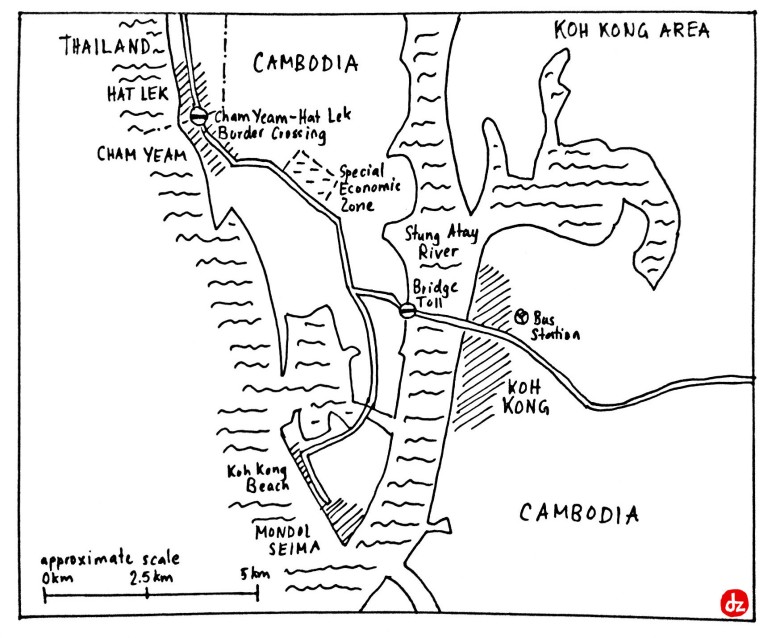 From Koh Kong, I took a private tuk-tuk to the border settlement of Cham Yeam (described above). When approaching the border gate, I braced myself for scams. But there was no such thing. The biggest hassle was the machines which were supposed to register my fingerprints, but did not work properly. Once they finally did, I got my exit stamp and walked over the short distance to Thailand. The Thai border post was not welcoming: Posters warned of the consequences of overstaying the visa, stating the fines to be paid in such a case and the respective entry bans. The whole border operation ran under the Trump-style slogan “good guys in, bad guys out”, which featured prominently on each sign. The officials, however, were friendly enough and granted me a 30-days visa-free stay permit.

Unspectacular and easy to handle: Walking across the Cambodian-Thai border.

When crossing from a poor country towards its more wealthy neighbour, the difference is usually striking at the border – Mexico and USA being a prominent example. I did not feel like this when I first saw Thailand. The stores and stalls in the narrow lanes of the border market, a group of shacks clustered around a small harbour, looked worse than their Cambodian counterparts. And the harbour itself was as filled up with garbage as Koh Kong’s river. The difference became just palpable once I tried out public transportation. I paid 120 Baht for the trip to Trat, entered the air-conditioned and spacious van, and within five minutes we left – with no further stops or other delays once we were on the road. I hadn’t had this experience since leaving China!

Practical Information:
Transport: A tuk-tuk from Koh Kong town to the Cham Yeam border costs 7-8 USD. Motorbikes are much cheaper, but not so comfortable when carrying luggage. There might be some public transport, but I did not see it before reaching the border itself. From Hat Lek, the village on the Thai side of the border, there are frequent minibuses (120 Baht) to the bus station of Trat, which has onward connections to many destinations such as Rayong or Bangkok.
Accommodation: Sleeping in the absurdly dimensioned Koh Kong resort right on the Cambodian side of the border must be an experience, especially for a Non-Chinese. Besides that, Koh Kong and Trat offer plenty of accommodation options – check booking websites or guidebooks.
Food: Plenty of street food on both sides, plus the gastronomy of Koh Kong resort. In Koh Kong, there are a couple of expat-held pubs, such as Fat Sam’s at the town’s main intersection.
Money change: The Thai Baht is the currency of choice on both sides of the border (along with the US Dollar in Cambodia), therefore there are no formal options to change money at the border. In the markets, it is however possible to change informally and at a somewhat lower rate US Dollars into Thai Baht. I did that at the same place where they sold the minibus tickets to Trat. Trat bus station has an exchange office, and there are several money changers on Koh Kong’s market.