Zum Inhalt springen
Myanmar has become accessible, touristic even – if you travel by air and stick to the beaten path. Enter by land, and you see a whole different face of the same country.

Burma was once one of the toughest countries to enter. Things have changed: Getting your e-visa to online and flying into Yangon or Mandalay airport is now fairly easy. The land borders, however, are quite a different affair. Here are some reasons:

I tried twice to enter Burma by land. In 2016, I planned to enter from India (Manipur state) and leave towards Thailand. I had to give up that plan because the government introduced a new rule that tourists who enter overland from India or China have to leave Burma at the same border. Who comes up with such unpractical rules?!

In 2017, I approached Burma from Thailand to avoid the aforementioned problem. I wanted to cross the southernmost part of Burma, entering from Kanchanaburi to Dawei and leaving Burma on the short boat-hop from Kawthaung to Ranong. A cocktail of different reasons (rainy season, rebel presence and lack of information) in the end led me to use the most “mainstream” crossing, from Mae Sot (Thailand) to Myawaddy (Myanmar).

In preparation for all these (non-)crossings I did some research, so here is the result: 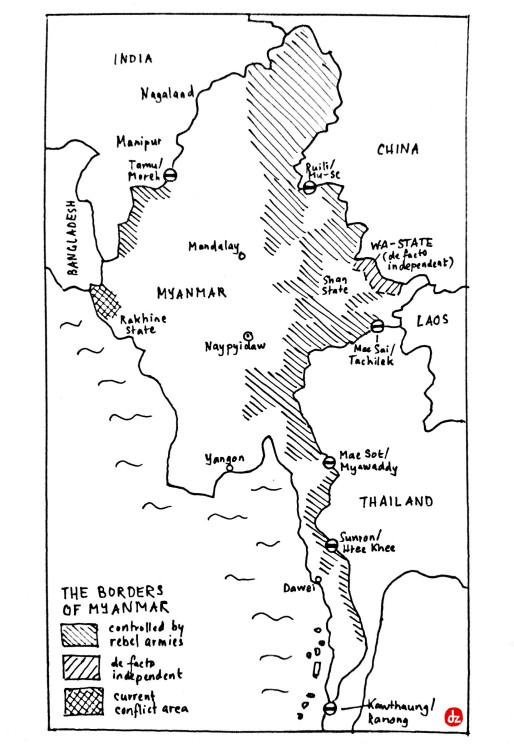 To/from India:
The only border crossing open for foreigners is Tamu (India)/Moreh (Myanmar). The major disadvantage is that the regulation remains in place that if you enter here, you must leave here as well – and you need a special permit for that. The only exception are overlanders with their own vehicle, which can apply for an even more special permit to enter here and leave towards Thailand. E-visas are not valid, visa on arrival out of question. Further, minor disadvantages are rebel activities on both sides of the border. The Indian Manipur state has a horrible reputation in the area, prepare for a lot of checks there.
d
To/from China:
There is only one border crossing open to foreigners: Ruili (China)/Mu-Se (Myanmar). Foreigners who enter here must leave through the same border crossing. Only pre-arranged physical visas are valid. Furthermore, a special permit is needed. On top of that, the road from the border to Mandalay is partially controlled by rebels. Therefore, the government requires you to rent a tour guide for that part.
s
To/from Thailand:
Four border crossings between Thailand and Myanmar are open to foreigners. All have different conditions. Here’s the list, from North to South:
Mae Sai (Thailand)/Tachilek (Myanmar) border can be crossed with a physical visa, an e-visa or even without a visa. In the latter case, you have to leave your passport at the border crossing and you will get a pass, which allows you to stay in the area for a couple of days. If crossing with a visa, you are theoretically allowed to continue into “mainland” Burma. However, a long part of the road is controlled by different factions of Shan rebels. Therefore, you will need to fly into the mainland. In some very rare cases, the government has allowed tourists to travel by land. In Bangkok I had to luck to meet someone who had done it. He reported it to be quite an adventurous trip through lawless lands and across intimidating checkpoints.
Mae Sot (Thailand)/Myawaddy (Myanmar) is the main land border. Bot border towns are easily accessible from the respective capitals by public transport, as the roads are good (even in rainy season) and there is no rebel presence on the road. It is possible to cross the border either by physical visa or e-visa, and the border guards in Myawaddy also hand out one-day passes to spend time on the Burmese side visa-free.
Sunron (Thailand)/Htee Khee (Myanmar) between Kanchanaburi and Dawei has recently opened for foreigners, physical visas are still mandatory. On the Burmese side, the road is unpaved. There is no public transport during rainy season, and while the road is still open, cars can get stuck so you would need to arrange a 4WD pick-up at the border. Furthermore, the road leads through territory controlled by the Karen National Union (KNU), which maintain two checkpoints. In January 2017, they briefly kidnapped a bunch of Thai tourists, but no further incidents are known. Reports suggest that the rebels like to intimidate foreign tourists a bit and extort some bribes, but there are no major hassles. Here’s some useful information on the crossing during dry season.
The Kawthaung (Myanmar)/Ranong (Thailand) border at the southernmost tip of Burma is quite special. There is no bridge, so it can only be crossed by boat. Foreigners can stay visa-free in the border area for up to two weeks, they get a border pass at the crossing. There’s plenty of tropical islands to discover, so that is probably quite attractive. If you arrive with an e-visa or a physical visa, you are allowed to continue into “mainland” Burma. Until 2016, foreigners were only allowed to travel by speedboat all the way to Dawei, due to sporadic fighting along the road. In 2016, the boat services were discontinued and foreigners subsequently allowed to use the road. It is not known whether rebel activities have ceased, but no incidents are reported. The trip to Myeik, the next town, takes 14 to 20 hours in dry season and I couldn’t find out information about the rainy season conditions.
A word of warning: The visa-free short-time visit options to Myanmar are tempting. But think twice before doing that spontaneously: Thailand allows foreigners to enter its territory by land only twice per calendar year. This is a measure to deter visa-runs. So if you already have entered Thailand by land twice and do a visa-free day trip across the border, the Thai officers will flatly refuse you to re-enter. The Thai allow you to fly back, but the Burmese will not allow you to travel visa-free to an airport.
s
To/from Laos or Bangladesh:
There are no open border crossings. The border to Bangladesh is an actual conflict zone (the Rohingya issue), the border to Laos not under the control of the central government.