Zum Inhalt springen
Singapore’s Malaysian suburb of Johor Bahru is well known. Less known is the suburb in Indonesia: Batam. It can easily be reached on a short boat hop.

Coming from: Harbourfront, Singapore
Going to: Harbour Bay, Batam Island, Riau Archipelago, Indonesia
Return trip: From Batam Centre, Indonesia to Harbourfront, Singapore
Documents required: Passport – Indonesia now grants a 30 day visa-free entry for most nationalities.
Waiting time: 1-3 minutes at each of the four controls – no queue, no bureaucracy.
Distance from Bern: 27.648 km (entry into Indonesia)
Rating: 4/10
Singapore is the first island nation I visited on this trip. Often though, it is simply perceived as the southern tip of the Malaysian peninsula, to which it is linked by two causeways. Therefore, it was also the last country I could truly reach by land. It is possible to continue eastwards in a combination of land and sea transports, though. Two islands with land borders can be reached: Borneo/Kalimantan and Timor. Even New Guinea is probably accessible that way. However, it would take a lot of planning, time and patience, and to be honest, I felt a bit fed up with all these humid jungle countries. Furthermore, continuing towards Australia or other Pacific nations would not be possible, the trip from Timor-Leste to Northern Australia being the missing link.

So after three months of overland travelling from Switzerland to Singapore, I decided to content myself with that. But there was one more country to which I could easily get from there, almost overland: Indonesia. Just 20 kilometres south of Singapore, Batam Island is a densely populated and apparently quite prosperous suburb of Singapore, which belongs to Indonesia. Looking at the map, the Riau Archipelago, to which Batam belongs, looks like a part of greater Malaysian peninsula. I was quite surprised to find out that Indonesia is so close to Singapore.

Batam is so well linked to Singapore that there is no need to make any arrangements. I just went to the Harbourfront in Singapore, from where most ships depart, bought a ticket and half an hour later I was on my way. About 30 boats and ferries cover the trip across the strait daily, with several more boats going to neighbouring islands of the Riau Archipelago. My boat was almost empty; In the mornings, most passengers probably travel in the other direction. After an hour, I was already in Indonesia.

Singapore’s ferry terminal and border crossing into Indonesia, a part of a mall at Harbourfront

Both border controls were easy and superficial, without queues. Indonesia has recently introduced visa-free travel for about 160 nationalities, but the immigration officer still asked a couple of questions – how long I wanted to stay and where I planned to go. And the stamp explicitly mentioned a “30 day visa exemption”. Indonesians and “truly” visa-free nationalities get a different stamp. Generally, however, the two harbour border crossings felt like controls at provincial airports.

The airport impression soon vanished once I set foot on Batam Island. From Harbour Bay, the first town down the way is Nagoya. I took a few steps into the market, but it was appalling: Right behind the hall was a garbage yard that  partially burnt and made the whole place stink brutally. In the town centre, there was a “bar street”, but all bars were closed. In another street, the police had a major operation and it looked like warfare had devastated all the market stalls there. The whole town made quite a shocking impression, coming from sterile Singapore. The best sight was probably the first one I had: The water village (Kampung Air) right at the Harbour Bay, an old village on stilts with a green and yellow mosque. 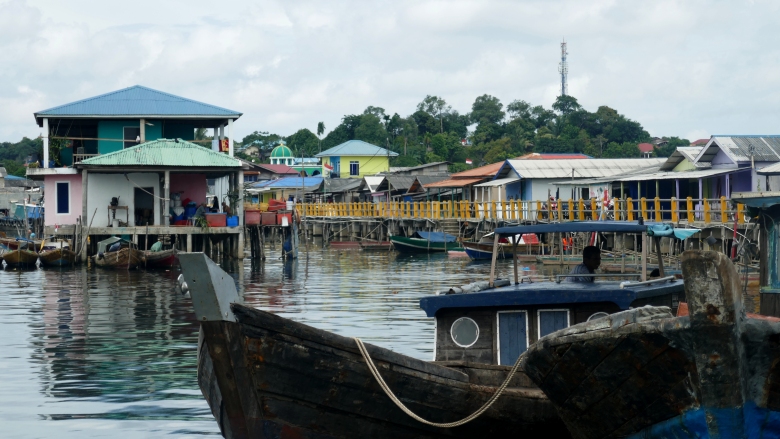 My trip to Batam was only a day trip, and I was not too unhappy to leave this island a couple of hours later. The visit of other parts revealed a lot of construction going on and much business activities – and much less dirt than in Nagoya – so the island is probably quite wealthy for Indonesian standards, due to its location close to Singapore. But apart from getting a slight cultural shock coming from Singapore, there is not much more to see or to do.

For my way back into Singapore, I chose another terminal, since Harbour Bay has only four departures per day. My return boat left from Batam Centre, the artificial capital of the island. Batam Centre boasts the typical liveless features of such semi-completed projects: Most evident are empty and deserted spaces, and there is a group of some representative government buildings, a huge ugly mosque, a mall and the ferry terminal. Mall and ferry terminal are linked, and the latter looks much like an extension of the mall. One of the shops was the Indonesian immigration control, and there I left the country as quickly as I had entered it.

Deserted looking building in a park in artificial Batam Centre

Practical Information:
Transport: Several companies offer about 30 daily trips in each direction, but to and from several harbours (see map above). I took Batam Fast, the return ticket cost 48.50 SGD. From Singapore, onward transportation by train or bus towards Malaysia and Thailand is easily organized. Batam Island is linked to other Indonesian islands by ferry (Pelni ferries leave from Sekupang harbour) and air (Batam Airport).
Accommodation: There are a couple of hotels near both ferry terminals on Batam Island, Batam Centre and Harbour Bay (in Nagoya).
Food: Batam Centre ferry terminal is linked with a mall which has several restaurants. Harbour Bay ferry terminal is part of a complex which also includes some food options – mainly Indonesian dishes.
Money exchange: There are exchange offices in both ferry terminals in Indonesia, but not on the Singaporean side.