Zum Inhalt springen
Love passport stamps? Here’s how you fill up your passport with eight new stamps in a couple of hours. A proper Passport Party!

I confess that I love passport stamps. I would not travel to a specific country just in order to get the stamp. But when I get one, I do appreciate it; Especially if it is from a special and rarely visited place. Passport stamps make a handy souvenir and are representative for the country visited, at times even for the mood of the border officer.

Here’s a bus trip which gets you eight different stamps in your passport in a matter just six hours. I do not know of any other place in the world where you get that many different stamps without even taking a detour. That bus links Bandar Seri Begawan, the capital of the tiny sultanate of Brunei Darussalam, with Kota Kinabalu in Malaysia’s Sabah state. So actually, there are only two countries involved. But Brunei has an eastern exclave called Temburong. Once in Malaysia, there’s no other way towards Kota Kinabalu than to cross Temburong – which results in four stamps within less than an hour. And then, a further peculiarity awaits: A Malaysian-Malaysian border crossing…

Here are the details.

Alcohol is forbidden in Brunei, in Malaysia it is available. The consequence is predictable: There is a row of garage-like pubs which serve fried chicken, beer and strong alcohol just across the checkpoint. But the thirsty Bruneians have to watch out if they want to make it home the same day: At 10 pm, the border checkpoint closes.
I crossed in the morning. The checkpoint was not busy and the bus counted only six passengers. The crossing therefore went speedy. In Brunei, I had to deliver my filled out departure card, on the Malaysian side there was no bureaucracy at all – and no passport sticker, unlike Peninsular Malaysia’s border. 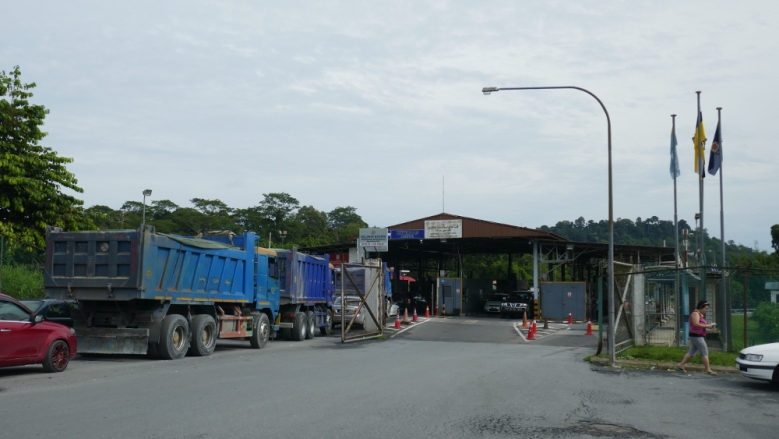 For the first and only time on this trip, a (Bruneian) border guard entered the bus and had a superficial look at the hand luggage. For the whole journey, the passengers never had to show their luggage. The border procedures merely involved passports.
At this border, drinking dens for alcohol tourists were not evident. Probably because Limbang is just around the corner: A Malaysian town that is surrounded by jungle, Brunei (and its exclave), and the sea – but no Malaysian territory. Obviously, Limbang is an attractive trading and “party” destination for the population of the surrounding Brunei districts. Soon it will be bypassed: Brunei is about to construct a bridge across the sea, linking the Temburong exclave with the mainland. Once that bridge opens in 2019, also this bus ride will no more be possible – so do your best to enjoy it now!

This border is only half an hour after the last one – Brunei’s Temburong exclave is a tiny piece of land, and the bus does not even stop there. By now, the passport checks have become routine. When the driver shouts “passport!!!”, the passengers merely laugh. A few even have lost orientation to what country a checkpoint belongs to – but the stamp quickly tells them. It even seems that the border guards are equally bored and aware of the minor significance of their checks – they hand out their stamps quickly, and on both sides the major cause for waiting time were smoking passengers.

Of all of today’s borders, this was the most absurd one. The Merapok/Sindumin checkpoint is just one building, and on both sides there are Malaysian border guards, with Malaysian uniforms and Malaysian passport stamps! I left the bus and handed my passports into a booth window. The guard put a Malaysian exit stamp into the passport and directly handed it over to his colleague, who again made a Malaysian entry stamp.
Only upon closer observance it became evident that one stamp was from Malaysia (Sarawak) and the other from Malaysia (Sabah and Peninsular Malaysia). The reason for this intra-Malaysian checkpoint is that when the two Bornean states of Sabah and Sarawak joined the Malaysian Federation in 1963, they were granted some special autonomy rights – among other, to control their own borders. Also if you cross from Borneo into Peninsular Malaysia by plane or take the boat to Labuan Island, your passport will be stamped. But nowhere else however does it feel as ridiculous as at the “land border”.

Practical Information:
Transport: There’s a daily “express” bus from Brunei (8 am) via Limbang (9.30 am) and Lawas (1 pm) to Kota Kinabalu (4.30 pm), crossing the four borders described above. The bus is operated by Jesselton/Sipitang Express (www.sipitangexpress.com.my) and costs 45 BND one way. From Kota Kinabalu, the bus also leaves at 8 am.
Accommodation: There are hotels in Bandar Seri Begawan (Brunei), Limbang (Sarawak), Lawas (Sarawak) and in most towns along the way to Kota Kinabalu.
Food: There are a couple of fried chicken restaurants at the Tedungan (Sarawak) crossing into Brunei. Apart from that, the border checkpoints have rather remote locations with no or very basic food options. The daily Jesselton/Sipitang Express bus stops for more than an hour in the town of Lawas. Lawas has a Sugar Bun Restaurant (a Malaysian Fast Food Franchise), a KFC, a OK looking café/restaurant called Hang Out Café and a couple of basic eateries.
Money exchange: I don’t remember seeing any money change facility at those borders, but honestly, after seeing that many border crossings that day I am not 100% sure about that. It is certainly possible to exchange or withdraw money in all the towns along the way.