Zum Inhalt springen
Nauru is a fantastic destination. Almost undiscovered, it offers plenty of unique or even absurd features. But don’t plan too much time: The island is tiny, and in a week you can easily visit each house.
Repubrikin Naoero
Capital: No official capital, government institutions in Yaren District
Inhabitants: 11.000
Area: 21 km2
Inhabited islands: 1
Languages: Nauruan and English
Around the island: 18 km (Island Ring Road)

Topside: Not what you’d expect in the Pacific Ocean.

…was exploring Nauru’s phosphate sites. I just love industrial ruins, and Nauru offers plenty of them for such a small place. And best of all: None are fenced off; I was free to stroll around everywhere. When I entered the very core, the Phosphate Treatment Centre, I passed by a guard in a hut. He was almost asleep and did not show any reaction – probably because the locals also pass by all the time. The Centre was impressive with huge machinery, piles of phosphate dust and parts of the plant still seeming to be operated. But also the cantilevers at the coast made a great sight (especially at sunset), and the semi-ghost town where the Tuvaluan and i-Kiribati workers once lived was eerily remarkable. And the best place to spot street art in Nauru, besides.

Inside the Phosphate Treatment Centre

Cantilevers in the late afternoon

…was arriving to the big Friday night concert at the Reef Bar and being too tired to attend it. I had been very active on my first day in Nauru: After just four hours of sleep (I had arrived overnight from the Solomon Islands), I took a bike and crisscrossed the island. When I made it back to Meneñ Hotel, I was utterly tired – tribute to the eventful day and the rather sleepless night. From my hotel room, I saw a concert unfold which made locals and expats rave. Meneñ’s Reef Bar is practically the only place to go out on the island! I would have loved to join, but I was not fit for it. Sadly, I produced my earplugs (as the music was loud in my room, too) and fell asleep. 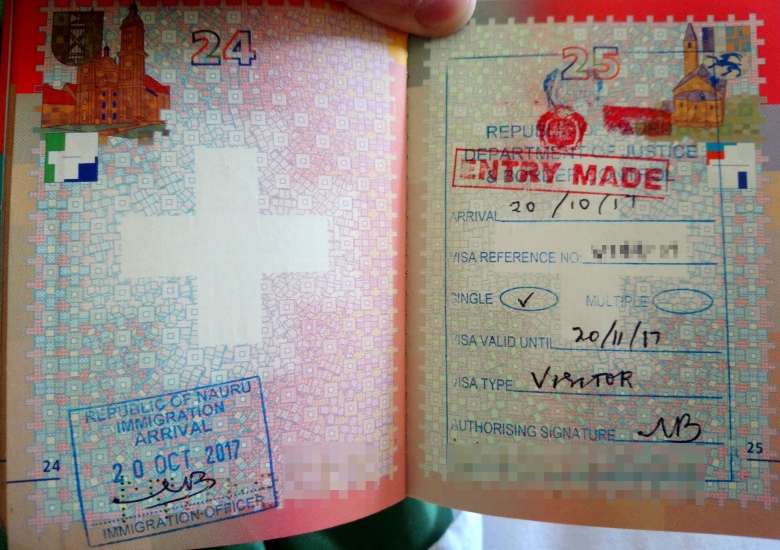 Entry stamps and visa of Nauru

Coat of arms of Nauru 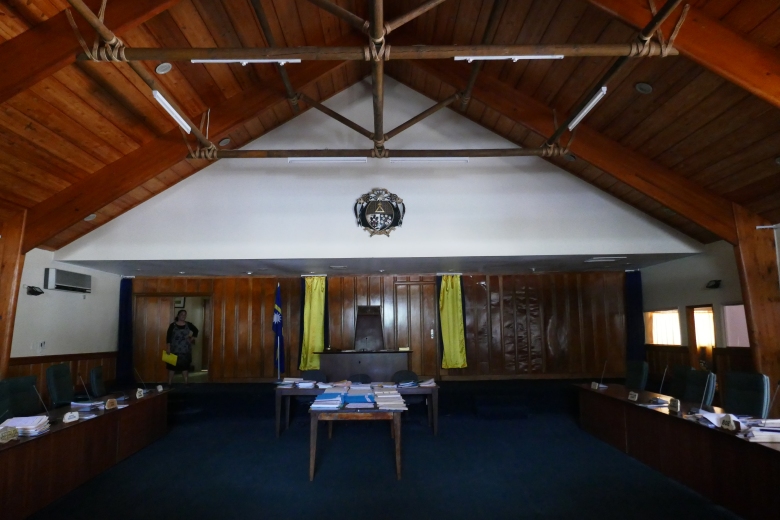 …Nauru is eight times smaller than the Principality of Liechtenstein and counts as many inhabitants as the two villages of Rebstein and Balgach taken together?

…Nauru is the least visited country of the world (yes, even after Afghanistan and Somalia)? Only 160 tourists make it to Nauru every year.

…most tourists who do visit Nauru are those who try to visit all countries of the world? There seems to be no other reason to travel there.

…Australia conducts its asylum procedures in Nauru? Persons recognized as refugees according to the Geneva Convention are nevertheless not granted entry into Australia – they linger in Nauru.

…because of that, there is a sizeable community of about 500 Iranians in Nauru?

…Nauru has the most diverse cuisine in the Pacific? Thanks to stranded migrants, you can get excellent Iranian, Somali or Pakistani dishes, beside the classics such as Chinese. Just the local cuisine is endangered: During the fat years after independence, most locals had hired cooks from abroad, and the own cooking tradition was forgotten.

…although most food products are shipped in all the long way from Australia, they are sold at cheaper prices than in Australia itself?

…Nauru’s main road is blocked when airplanes land? For taxiing to the terminal building, they have to cross that road.