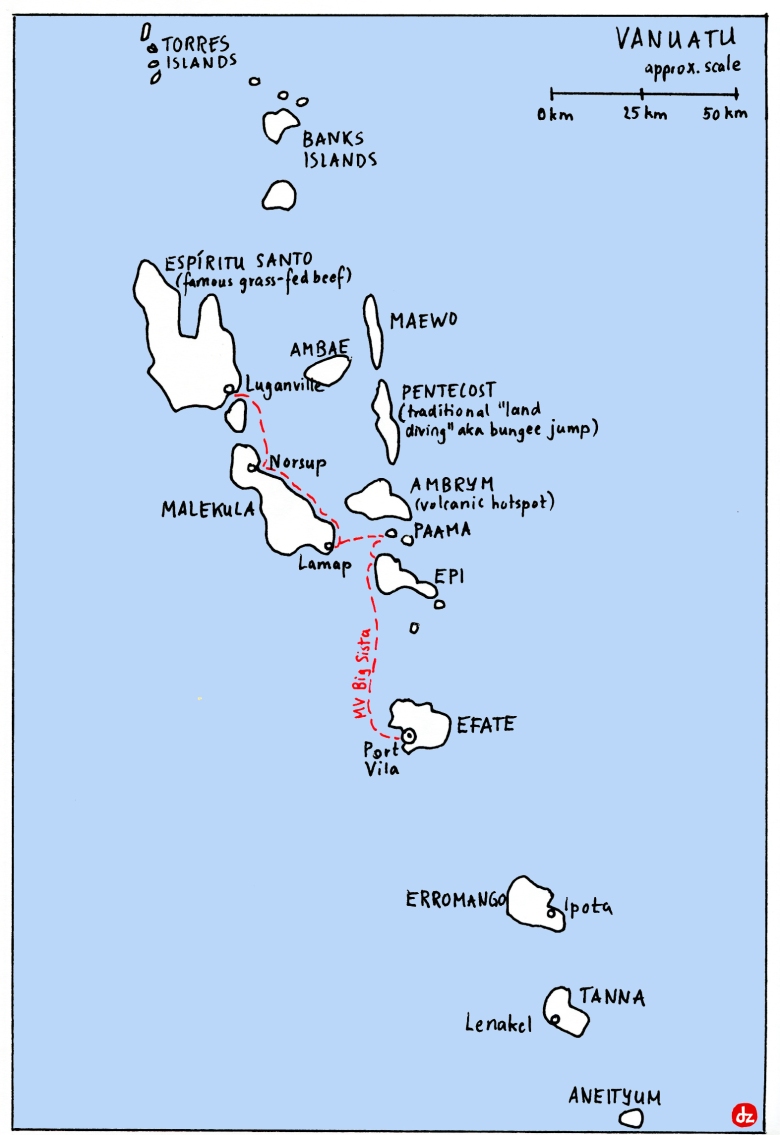 Vanuatu is rather strict on limiting your entry visa to the time you effectively spend there: I had to show the officer my onward ticket, and got an entry stamp that allowed me to stay only until my day of departure. This visa is issued on arrival and with no formalities or costs, so it was no big problem. Vanuatu uses pretty and archaic passport stamps. But the border guards should get new ink pads: those in use produce stamps that are barely readable. 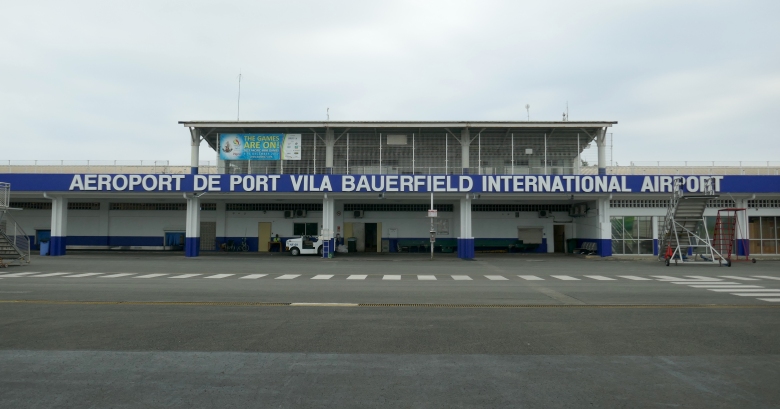 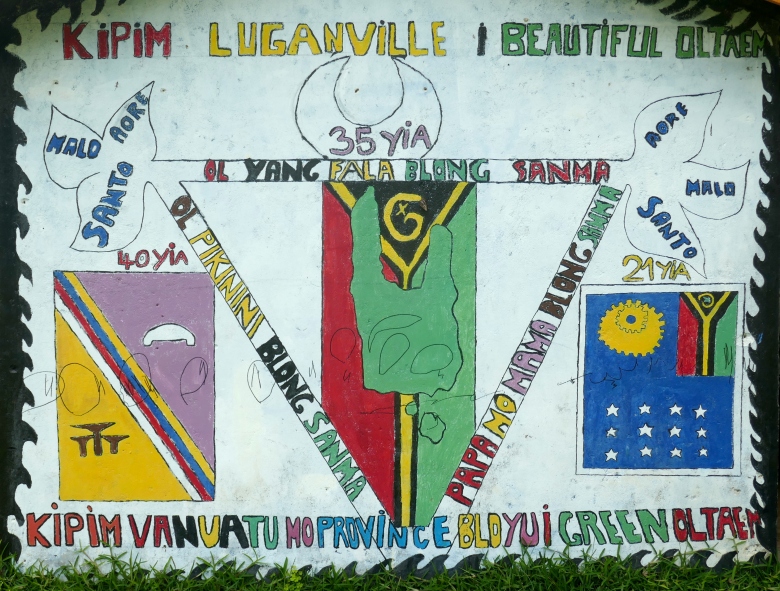 …was the boat trip from Port Vila to Luganville. Oceania may be essentially shaped by water, but it is surprisingly hard to travel longer distances by ship in Oceania. Most locals dislike travelling by sea and prefer to use inland flights. Therefore, there are not many connections, and the schedules are rather unpredictable. But Vanuatu has regular ship connections, linking the two main towns of Port Vila and Luganville. It took me a while to find out the schedules, so here they are (as of November 2017): MS Big Sista leaves on Monday at noon, Vanuatu Ferries on Monday evening. The price is around 8000 VUV (ca. 75 USD) on both ships, the travelling time supposedly 24 hours (quite massive for a distance of 270 km as the crow flies).

Actually, it took much longer: Big Sista made it to Luganville in more than 30 hours. The main reason for the slow pace was sheer inefficiency of the crew – but also the boat’s speed, which was 20 km/h, and the circuitous route. The boat called into about ten “wharfs” on the islands of Epi, Paama, Malekula and Espíritu Santo. In half of them we actually just anchored in some distance from the beach, and the loading and offloading of passengers and cargo ran on small dinghies. When we reached such a place, a part of the crew would typically gather on the cargo deck and proceeded to put the dinghy into the water. Next the captain (a white guy) would complain that the rest of the crew members had not showed up (once there was a call on the loudspeaker: “crew, crew, crew!!! please wake up!”) and about the general lack of organization. Eventually, cargo was offloaded, and later new cargo poured in. The more rural the place was, the higher the share of the traditional cargo bags made out of palm leaves. A wooden stick held them together and showed the name of the owner. Once it seemed that all loadings had been processed, it usually took another half hour until we left, as last-minute passengers showed up, in one case even the police, some cargo had been forgotten or whatever other reason. I don’t want to make this sound as a complaint: I was in no hurry and highly appreciated the time in Malekula’s remote harbours. It gave me a much deeper insight into the rural life of Oceania than any trip before.

Arriving to Luganville was less pleasant: A heavy downpour welcomed the Big Sista. After more than 30 hours on the boat, the goodbye was quick: I jumped off and hopped into the next bus. 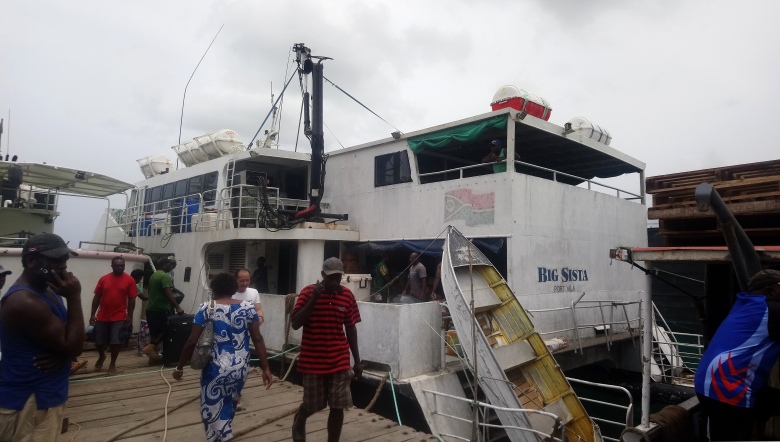 …was the feeling of getting tired with Oceania. Rainy season had now properly started, and I barely saw the sun. The locals’ phlegm, the music and the very simple infrastructure did not feel exotic anymore, and sometimes even annoying. Reading the guidebook made me yawn: Snorkelling spots, beaches, WWII sites, caves, and waterfalls – I had seen it all elsewhere, and they were not that attractive in rainy season anyway. Vanuatu’s volcanos were tempting, but I neither had the right shoes nor the time. It was a pity, since the locals indeed were very friendly people (never cheating foreigners!) and the country is certainly one of the most interesting and diverse of the region. 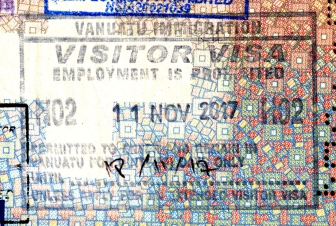 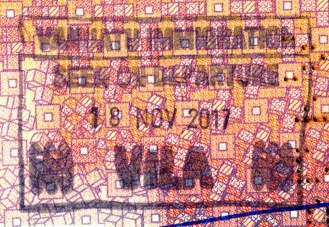 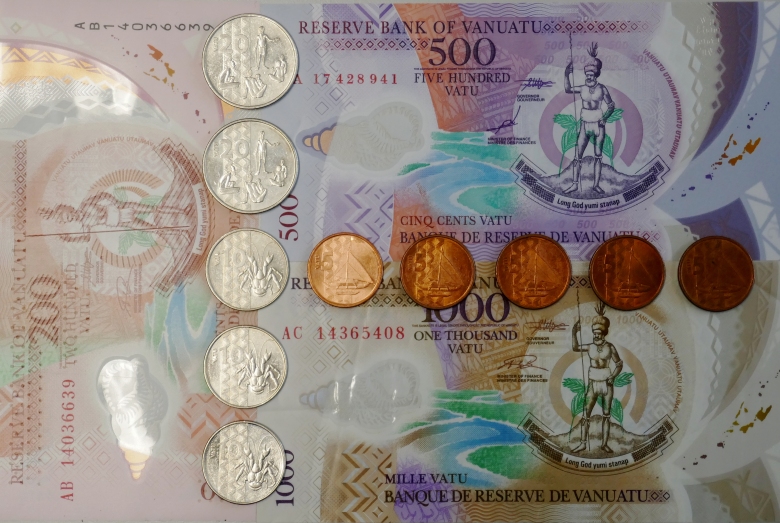 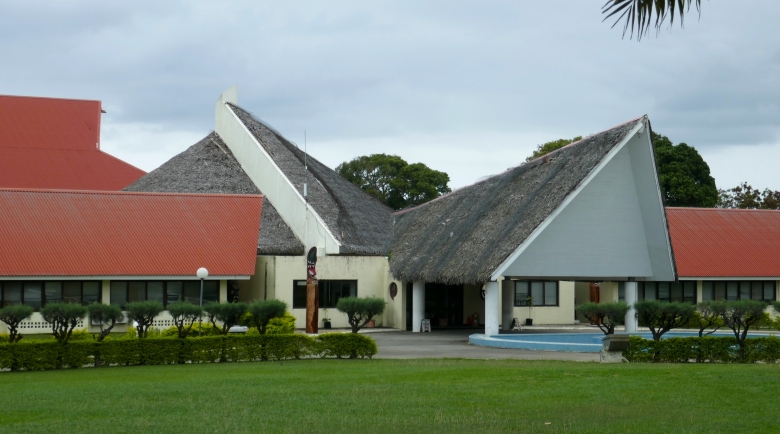 The parliament building in Port Vila

…the beer of Vanuatu has the same name as Kenya’s? Both are called Tusker. But only Vanuatu’s has a bitter version.

…Vanuatu had the best supermarkets of all Pacific countries I visited? It’s probably due to the proximity to New Caledonia (a French territory), but nowhere else I got European products such as Haribo liquorice or Spianata Calabrese (a hot salami). 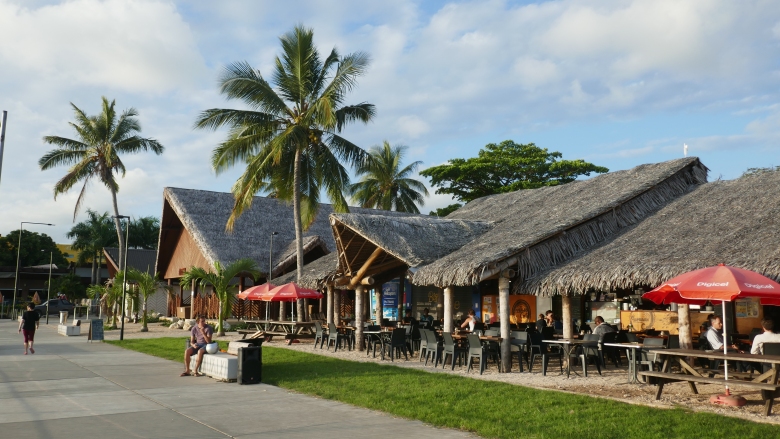 Practical Information:
International transport: Port Vila’s international airport has connections to Australia (Sydney, Brisbane), New Zealand, New Caledonia, Fiji, Solomon Islands and Papua New Guinea, and there’s a weekly flight from Luganville to Brisbane. There are no international passenger ships, but occasional cruise ships do link Port Vila with Nouméa.
Inland transport: Air Vanuatu serves more than 30 destinations from the two hubs Port Vila and Luganville, but most of them not daily. Holders of an international ticket of Air Vanuatu get a 20% discount when buying the ticket in person at theAir Vanuatu office. An alternative is to travel by boat. Two ships (Big Sista and Vanuatu Ferry) depart Port Vila on Mondays for Epi, Malekula and Santo Islands, returning on Wednesday. Tickets can be bought the day of departure. The trip takes between 24 and 30 hours and allows getting a feeling of Malekula and some smaller islands. Other islands are served by cargo boats, which also may take passengers – ask around at the wharf. On Efate and Santo Islands, public transport is provided by minibuses. The other islands have no paved roads, the tracks are very rough. If there is any means of public transport, it is therefore mostly by truck. Other ways to get around are small boats and by foot.
Accommodation: There is accommodation of all ranges in Port Vila and Luganville. In Port Vila, there’s even a luxury resort in the city centre, on a separate island (Iririki). Outside these cities, there is a couple of resorts (mainly on Espíritu Santo Island). If you venture into the less visited islands, there are only basic guesthouses.
Food: Amazingly for a small island country, Vanuatu is famed for the grass-fed beef, mainly from Espíritu Santo Island. The steak I tried in Luganville was indeed delicious. Port Vila has a number of fairly good eateries, while in the rest of the country, the Pacific classics (mainly Seafood) abound. Chinese restaurants are less frequent than elsewhere in Oceania. 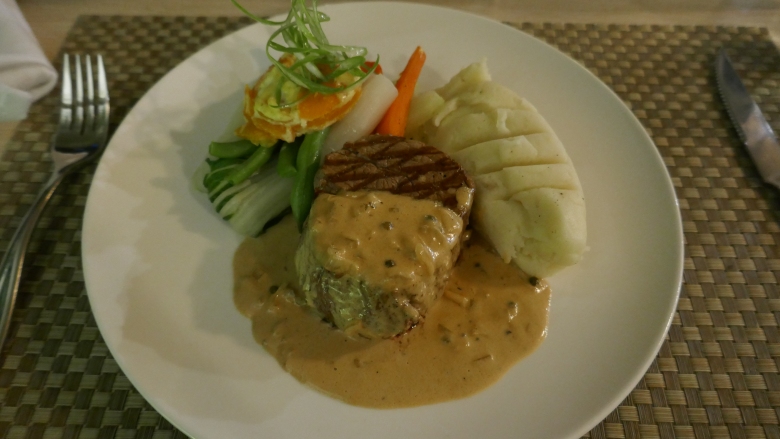 A Santo steak
Money: Getting Vatu is no challenge: There are numerous ATMs and exchange offices all over Efate and Espíritu Santo Islands. On the other islands, they are less frequent. It’s a good idea to bring cash, therefore.
Communication: Upon arrival, I got a free Digicel SIM and bought a 1.000 Vatu package, which included 520 MB data and 1.000 Vatu credits. That’s plenty – I used only a small part of that. European SIM cards do work in Vanuatu, obviously at high roaming costs. Free Wifi is much more common than in most other Pacific countries.