Spontaneously, I set off for a new passport party trip. After an night train ride to Budapest and half a day in an Intercity, I got to my first real border: Nyírábrány – Valea lui Mihai. Here are some photos.

Public transport across Hungary’s Eastern borders is meagre: Just three trains per day link Nyírábrány with its Romanian sister village Valea lui Mihai, which is populated mainly by Hungarians. All other trains end at Nyírabrány station – the border railway station.

Nyírábrány railway station. I arrived there on a bus on bumpy rails, and it was packed. I hoped most Hungarian commuters would leave, but as it turned out, they were Hungarians from Romania and they stayed till the end, Nyírábráni station. I hoped they had a plan, or even better: That they change to a bus, bound for Romania.

Situation map of the border crossing.

Nyírábrány is a large, widespread village in a totally flat and dull landscape, which can probably be said about any Hungarian village. There were a few shops and a German discount supermarket, and elder people and some children milling around. The train passengers left the station and started walking towards the Romanian border. No bus was waiting.

Nyírábrány – Valea lui Mihai border checkpoint, a shared checkpoint of Hungary and Romania. It was easy to follow my fellow passengers there, about 800 m from the train station. It was harder to travel onward: On the Romanian side, Valea lui Mihai is 10 km away. 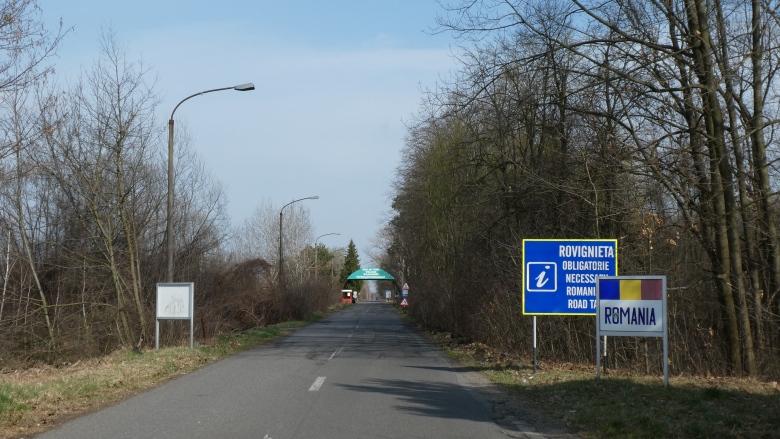 The Romanian side of the border is deserted. The building in the background is probably the former Romanian checkpoint. Now they sell Romanian highway vignettes there. 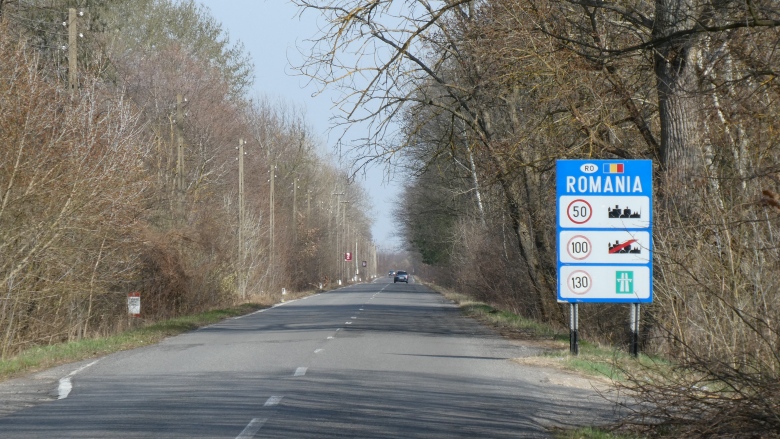 The road into Romania. I saw the other pedestrians flagging down cars, so I followed their example. It was not hard: The first car stopped, they did not even ask for money.

Valea lui Mihai – I got there just 10 minutes later. A somewhat desolate border town, called Érmihályfalva by its Hungarian majority population; all institutions seem to be bilingual. Neither ugly nor beautiful, it is the reason why I like to travel to border areas: It is just a random place in its country, representing it much more than any attractive capital or tourist destination.

Apparently, the town once had a sizeable Jewish community, there is still a quite well preserved synagogue.

Valea lui Mihai train station is the official border checkpoint for railway passengers. Hence the Romanian flag. I used the bus for getting away, since I did not have the patience to wait for the next train.