Zum Inhalt springen
This is a border which is open for pedestrians, but hard to get to without vehicle; this is a border in the middle of nowhere which has its own Irish pub.

Siret/Porubne is one of only two border crossings between Romania and Ukraine where pedestrians are allowed to cross. Located in the middle of historic Bukovina region, the border crossing is rather difficult to access by public transport. The Ukrainian border village is called Terebleche, but the name of the crossing is Porubne.

Getting there (from Romania): Four buses per day link Suceava with Siret, the border town. From there, it is about one hour to walk to the border crossing, alternatively take a taxi. There is one direct bus daily from Suceava to Chernivtsy, leaving in the early afternoon, plus one very slow train connection per day.
Getting there (from Ukraine): There is no public transport on the Ukrainian side except for some marshrutkas (minibuses) with erratic timetables. From Chernivtsy and the towns closer to the border, it is possible to take a taxi. At the border crossings there are usually no taxis, leaving hitchhiking as the only option if the marshrutkas have left.
Accommodation: Plenty of options in Chernivtsy and Suceava plus the Frontier Hotel directly at the border, on the Romanian side.
Money change: Rates and availability are better in Ukraine. There is no formal money change directly at the border, but there are exchange offices in Siret.

Siret is the border town on the Romanian side, about 5 km from the homonymous border crossing. Although Siret/Terebleche is the principal border crossing from Romania to Ukraine, the closeness of the border is hardly palpable: Hardly any Ukrainian cars or people, no special shopping offers or fuel stations… Probably Ukraine is simply too cheap. 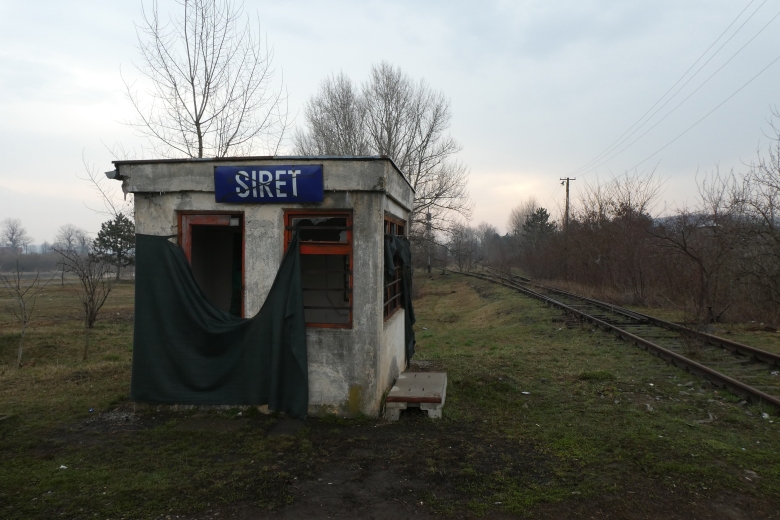 Railways have been dismantled in Siret long since, railway is no more option for getting here. The train station is crumbling and makes a desolate impression. There is still a station called Vadul-Siret, but it is located in Ukraine, about 20 km from Siret. Vadul-Siret is the main border station between Ukraine and Romaina.

Leaving Siret town: To the right is the main road towards Botoșani, it is much more frequented than the straight road to the border. I was to be the only pedestrian. 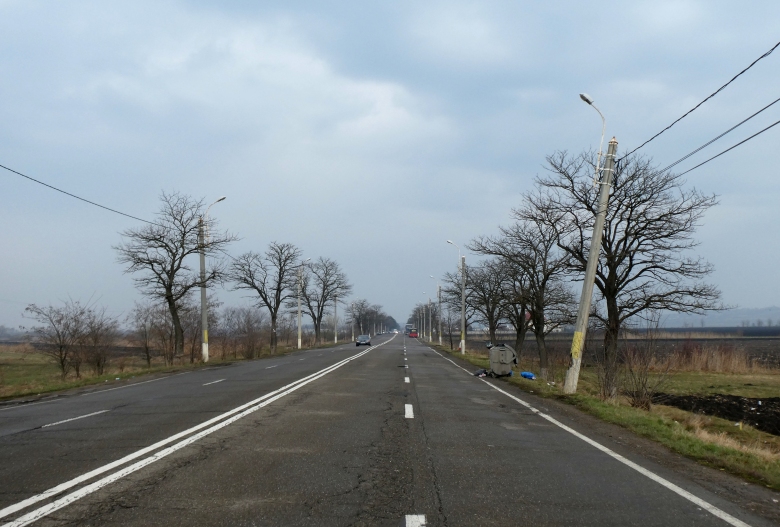 I took a border hike to the crossing itself. It was not a beautiful walk. The morning was damp and cold, with frequent showers. The area was desolate in grey and brown, with no landmarks standing out. A few cars overtook me at high speed, mainly taxis. As I later became aware, their passengers just made it to one of the few minibuses which wait on the Ukrainian side of the border. Wandering idly and enjoying the border atmosphere, I missed them.

One of those oddities which are typical for border areas: The Frontier Hotel, a modern facility complete with Irish Pub, just 100 meters from the border crossing on the Romanian side. Its main clients are probably truck drivers which got stuck at the border, although I am not sure if the prefer to sleep for free in their own cabins. 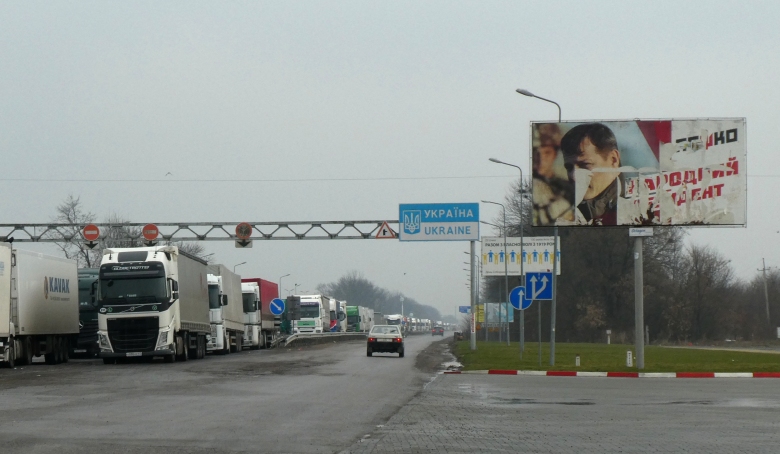 Welcome to Ukraine! The procedure on the Romanian side of the border was quite straightforward, a passport scan and I was done. The Ukrainians were more complicated: You get a card („talonchik“) and need to show the required amount of stamps on it upon leaving the border crossing. So I had to queue alone in a truly Soviet-looking concrete building where the customs check was supposed to take place. After ten minutes, a lady turned up, stamped my talonchik and did not check a thing. But formalities matter. I delivered the complete talonchik, left the border crossing and than it started raining heavily. As it turned out, the last marshrutka had just left for Chernivtsy and the next was due in a couple of hours. I tried hitchhiking and the first car stopped: A friendly couple from Chernivtsy, belonging to the Romanian minority, delivered me directly to the hotel I had booked!

Chernivtsy (Cernăuți in Romanian), the historical capital of Bukovina. I had visited the city 15 years ago and expected it to be renovated and developed upon my return – like Lviv, for example. This was not the case: Chernivtry has preserved its charm of decay, its post-Soviet aura.