Zum Inhalt springen
Guam is Micronesia’s hub and an important tourist destination. I found it rather boring compared to other Oceanian island nations, with the local culture limited to some Disney-like displays for tourists.
Guåhån
Capital: Hagåtña
Inhabitants: 162.742
Area: 545 km2 (cf. Canton of Basel-Landschaft 518 km2)
Inhabited islands: 1
Languages: Chamorro and English are official.
Around the island: ca. 130 km on good roads (that’s something, in Micronesia)

Entering Guam is entering the United States, which means: Much stricter passport checks than anywhere else in Oceania. Passport control at Antonio B. Won Pat Airport is automated. You have to scan the passport yourself and answer a couple of questions on the screen. The automat then prints a slip of paper which you have to hand over to an immigration officer. The officer checks the biometrics and asks some more questions. I was lucky, the officer was friendly and curious about my onward trip to Chuuk, which he considered a great plan. My brother was less lucky: His automat slip had a big black bar on it (probably randomly generated), meaning additional checks. He was stuck for an hour in the corridors of the immigration officers, mostly waiting for brief interviews. 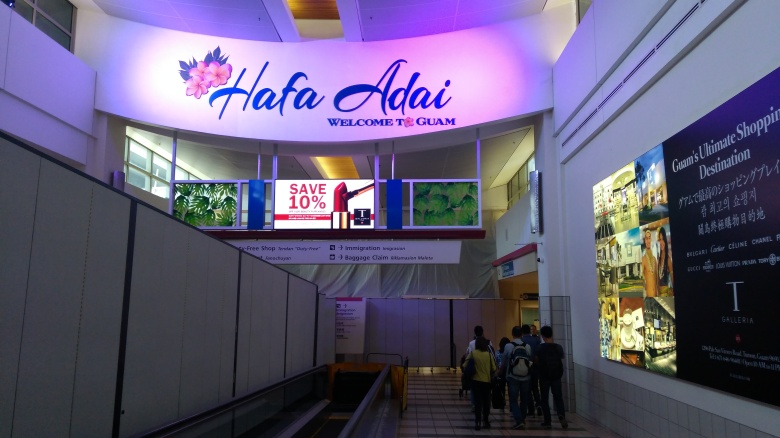 …was eating out in Guam. Both Asian and U.S. cuisine options are really good – e.g. the burgers at Guam Brewery’s taproom or the spicy ramen noodles at Fuji Ichiban. And I did not even try all the Jamaican, Filipino, Chamorro and other options. I particularly appreciated the good food after touring the other Micronesian countries with their rather dull culinary situation.

Taiwan Ramen at Fuji Ichiban. I later went to Taiwan and never got such good ramen.

…was visiting “Chamorro Village Night Market”, supposedly a place to explore the local culture. What I found was a large compound of concrete stalls selling souvenirs to large crowds of Asian tourists, surrounded by at least ten grill kitchens which produced a lot of smoke and sweetish marinated grilled meat. It was difficult to meander between the large tourist groups, and the food was disappointing compared to Guam’s great restaurants. There was also a dancing show going on. Due to the large crowds, I could not see much, but I am quite sure the dancers were Filipinos from the tourist industry. At least I hope the real Chamorros would not do such a thing. 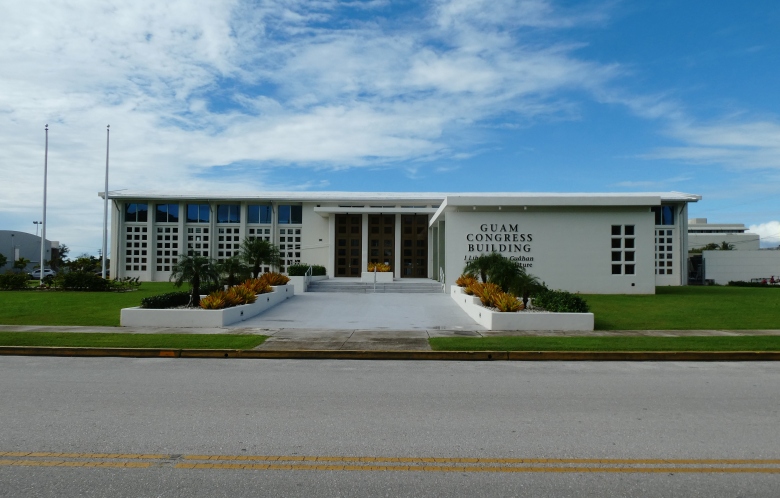 The coat of arms of Guam

…car plates in Guam are very specific? They even show the village where the car is registered (TL=Talofofo, MZ=Merizo etc.)

…Guam seems to be a regional power? Other Micronesians consider it to be the big neighbour.

…the world’s largest Kmart is in Guam? Before coming here I was not even aware what a Kmart is. But indeed it is a very large shop for all kinds of food and non-food products, and apparently one of the main attractions of Guam for people coming from other Micronesian countries. (Not a surprise, considering the shopping options there.)

…there was a small-scale Dengue outbreak in 2019? Insect repellents were suddenly sold out and the politicians said intelligent things like “Dengue is certainly not a good thing”, “tourists are very sensitive to things like this”, or “we don’t call it outbreak, we call it cases”.

…7% of the population are Chuukese? A bookshop in Micronesia Mall even sells a book with “My first 200 Words in Chuukese”. 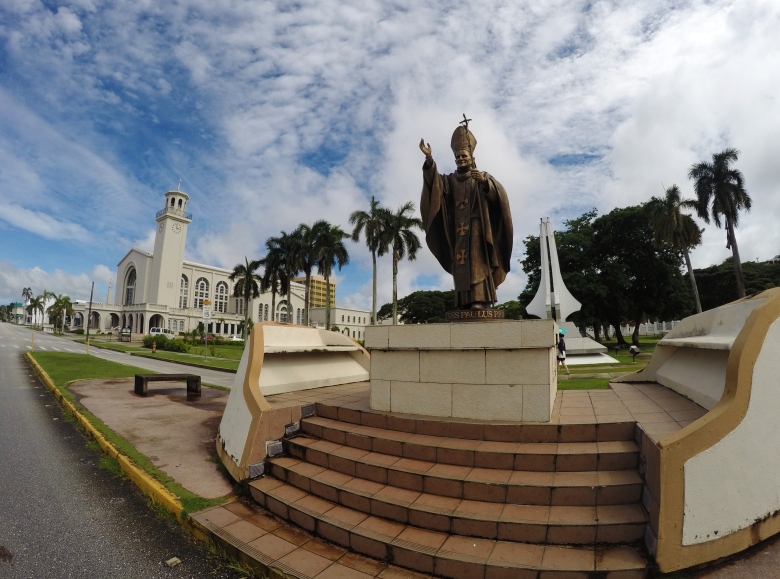 Practical Information:
International transport: Guam is Micronesia’s hub, with daily connections to Saipan, the United States, Taiwan, China, and Japan. Within the region, United flies several times weekly to Palau, Yap, Chuuk, Pohnpei, Kosrae, Kwajalein, and Majuro. Star Marianas Airlines flies twice weekly to Rota in the Northern Marianas.
Inland transport: Public transport is very limited. There are a couple of shuttle busses which commute between the bigger hotels of the Tumon/Tamuning area and some major malls in the same area. There is no public bus going to/from the airport. Very rarely, a public buslinks Tumon/Tamuning with Hagåtña, but it is very difficult to find out the schedule and the bus stops. Taxis have cartel-like prices, charging up to 30 USD for the 4 km from the airport to Tumon/Tamuning. Stroll Guam, the local version of Uber, is a cheaper alternative: I paid 14 USD for a ride from Hagåtña to Tumon.
Accommodation: There is a lot of accommodation in all price ranges in the very touristic Tumon/Tamuning area. Most of these hotels look a bit run-down. Their target group are Asian tourists, so sometimes it is even hard to find information in English or Chamorro, which are the local languages. Outside Tumon/Tamuning, there are very few accommodation options.
Food: The local Chamorro cuisine is quite similar to the Filipino food. Good places to try are the two Mezkla restaurants and the Chamorro Village Night Market in Hagåtña, which offers huge quantities of sweetish marinated meat to Asian tourists. I did not like it very much, though. What I did like was the high quality of Asian food, e.g. Fuji Ichiban Ramen, which has two branches in Tumon. There are a couple of diner-style American restaurants, too, plus the notorious U.S. fast food joints and two craft breweries: Guam Brewery in Tumon and Garabao in Hagåtña – both quite good.
Money: Guam uses the U.S. dollar and the situation is almost the same like in the United States, i.e. ATMs and credit card payment are widely available. Credit Card payment is a bit less popular than in the U.S., though.
Communication: Guam is one of the few places in Oceania where foreign SIM cards do work, at least mine did. There are plenty of free Wifi spots, too: in hotels, restaurants, and malls.
13.476282 144.750223
Hagåtña, Guam