Zum Inhalt springen
The Marshall Islands are repeatedly bombed by the United States, as their nuclear and ballistic missiles testing ground. 4 of the atolls are already destroyed. The others are threatened by rising sea levels. A quite peculiar place to visit.
Aolepān Aorōkin M̧ajeļ
Capital: Mājuro Atoll (Dalap-Uliga-Darrit)
Inhabitants: 58.000
Area: 181 km2 (cf. Canton Appenzell Innerrhoden 171 km2)
Inhabited islands: 24 atolls or islands
Languages: Marshallese, English
Around the island: 50 km (road from Rita to Laura on Mājuro Atoll) 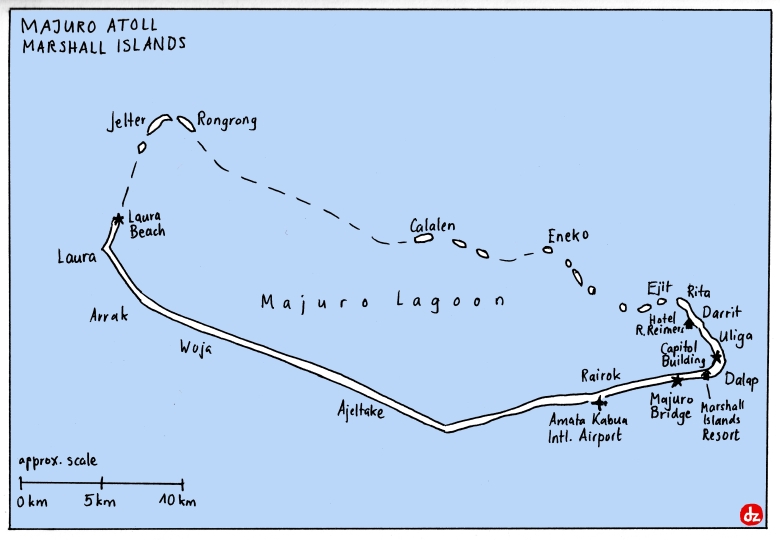 I entered the Marshall Islands at Bucholz Army Airfield on Kwajalein Atoll, which is located inside a U.S. army base. There were two immigration controls (Marshallese and U.S.) and I got two passport stamps. Plus I was allowed into an army base as a civilian. Quite unique! That’s why I made a separate blog entry on this. Most tourists, however, arrive in the capital Mājuro at Amata Kabua International Airport. 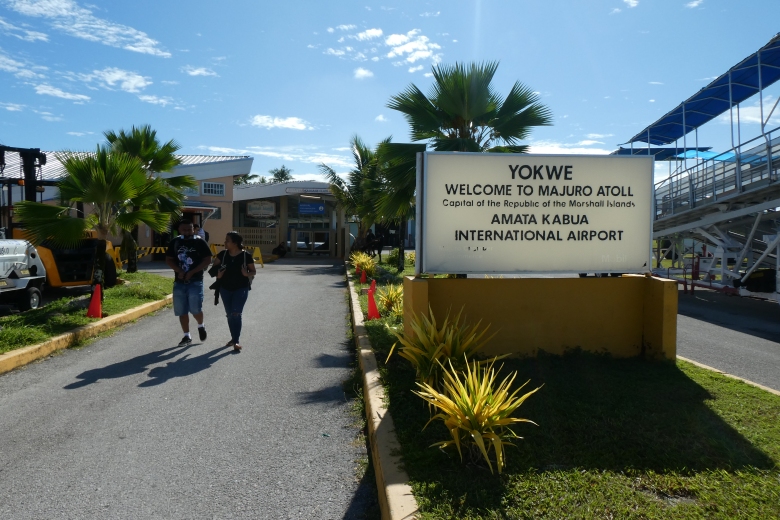 What makes the Marshall Islands unique

…was the roadtrip on Mājuro Atoll, all the 50 km from Dalap-Uliga-Darrit to Laura. That’s quite a distance in Oceania! And there is a lot to see: The Marshall Island’s highest spot (the Mājuro bridge between Dalap-Uliga-Darrit and the airport), the international airport, traditional villages, beaches and shipwrecks. Most impressive, however, is to see the coast in a distance of maximum of 100 metres on both sides of the road for the whole distance – gives you a feeling how narrow the island is!

…was the food on Ebeye. The options are very limited: There is just one restaurant, inside Hotel Ebeye. We tried it out the first night and were never tempted to come back. There is a “Southern Fried Chicken” parlour at Triple J shopping centre, which looked appalling. We then survived by potato chips and beef jerky from Payless supermarket. There might be good fish around Ebeye, but none of it is available.

Passport Stamps of the Marshall Islands.

Flag of the Marshall Islands.

Nitijeļā, the parliament of the Marshall Islands (currently under reconstruction).

…a man called Alfred Alfred Jr. run for the 2019 Nitijeļā (parliament) elections for Ailinglaplap Atoll District? He got elected meanwhile. Having the same first and family name seems to be not uncommon.

…the only souvenir shop in Mājuro is called “Tourist Trap”?

Practical Information:
International transport: The United Airlines island hopper service links Majuro (Amata Kabua International Airport) and Kwajalein (Bucholz Army Airfield) almost daily with Honolulu, Kosrae, Pohnpei, Chuuk, and Guam. Air Nauru flies twice weekly to Nauru via Kiribati.
Inland transport: Inland flights between Majuro and Kwajalein are provided by the United Airlines island hopper (see above). Air Marshall Islands flies irregularly to other atolls. Most locals travel by boat, though, whose timetables are nowhere available and it is highly unlikely that such timetables even exist. Taxis are available in the urban centres of Dalap-Uliga-Darrit (Majuro Atoll) and Ebeye (Kwajalein Atoll). They operate as shared taxis and charge usually a flat 1 USD per passenger, except for longer distances on Majuro. The U.S. Army provides a free ferry link between Kwajalein and Ebeye islands.
Accommodation: There are two bigger hotels on Majuro Atoll: Marshall Islands Resort and Hotel Robert Reimers. Marshall Islands Resort has a more beautiful setting, but I found Reimers more helpful and more attractive. The fact that the United Airlines pilots stayed there as well maybe confirms this impression. The only option in Kwajalein is Hotel Ebeye (see separate entry).
Food: The Marshall Islands are no foodie destination. There are a couple of simple restaurants on Majuro Atoll and I found the restaurant of Hotel Reimers quite OK, as long as you stick to fish dishes. The culinary situation on Kwajalein is clearly worse. There is only one restaurant, located in Hotel Ebeye, and it is not good. An awful-looking “Southern Fried Chicken” and the Payless supermarket are the only other options in Ebeye. It is not a bad idea to bring own food, although you certainly won’t starve. The U.S. air base on Kwajalein has a Burger King, a Subway and an American Eatery, but only the Eatery is accessible for civilians. It is however possible to order food at Burger King and Subway while waiting at the dock. 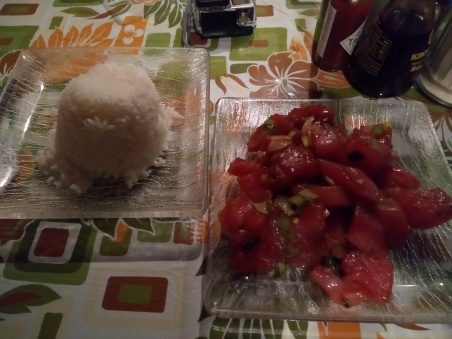 Poke at the Restaurant of Hotel Reimers
Money: The Marshall Islands have no own currency, they use the U.S. dollar – in cash. Credit Cards are accepted in Majuro’s two big hotels, but almost anywhere else, certainly not on Ebeye. I haven’t seen any working ATM, so bring enough cash.
Communication: International SIM cards do not work on the Marshall Islands but it is possible to buy a local SIM card for calls and data. NTA offers access to wireless internet in many hotspots on Majuro and Ebeye for 10 USD per week, I found this much more convenient than buying a SIM card. Hotels do not offer free wifi.
7.086066 171.373200
DUD, Majuro Atoll, Marshallinseln