Zum Inhalt springen
The first real border on this trip, where a passport was actually needed (and stamped!) for the crossing.

At the Romanian-Moldovan border, the European Union and the former Soviet Union meet. Although Romanian is spoken on both sides of the border, it is a border between two worlds. Moldova is the poorest and least developed country of Europe, while Romania caught up quite a bit in the last couple of years and looks more and more modern. In one sense, unfortunately though, Moldova has now also adapted EU standards: The passport stamp looks like those of the Schengen countries, with only one difference: no EU stars. I preferred the Soviet style stamps, which were small but colourful – red usually, in the case of Moldova.

Giurgiuleşti, the first Moldovan village, is a very strategic place for Moldova. Squeezed in between Romania and Ukraine, a narrow strip of about 500 meters of the banks of Danube river belongs to Moldova. It is the only access to navigable water for the otherwise landlocked country. Moldova used this strip to build an oil terminal and kind of a free trading hub. And a new railway line to link it with Cahul, the first town already served by the Moldovan railway. No passenger trains run, so we had to take a bus.

The last time I had been in the area, in 2008, I had even managed to cross all of Moldova by foot. It is an impressive 1.5 km along the main road between the Ukrainian border post on the east side of Giurgiuleşti to the Romanian border on its west. Which is also where our hike ended back then: The European Union does not allow any pedestrians to cross into Romania there. So we needed to hitchhike, and a friend even had to help smuggling to return the favour.

There were no such problems this time, the crossing was boringly smooth. The only little diversion was when the Romanian customs officer asked me whether I brought more than 10.000 Euro in cash, which I would need to declare. He then translated his question into Romanian for the fun of the fellow passengers, to which the thought of crossing the border with such an amount of money seemed absurd. 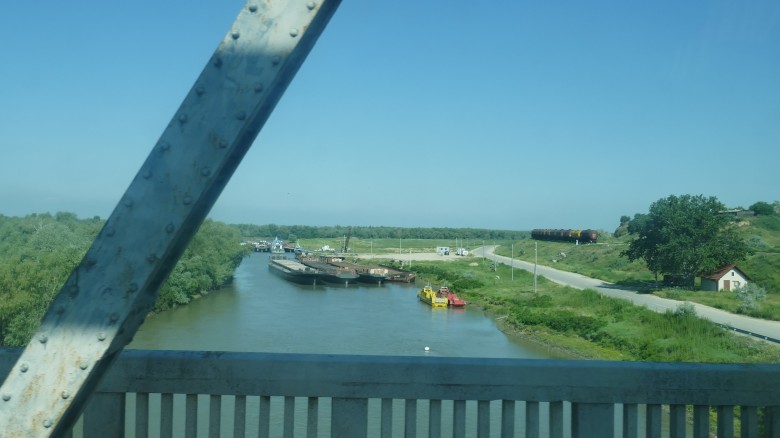 Crossing Prut river, to the right the new railway to Giurgiuleşti