Zum Inhalt springen
A travel warning applies for this area, and the locals are annoying. But Nunukan on the Indonesian side feels really like a frontier.

Travel warning: Many governments advice against “non-essential” travel to Malaysia’s coast between Tawau and Sandakan, due to the risk of attacks and kidnappings by Filipino Islamists from the nearby Sulu Archipelago. A special operation of the Malaysian army is ongoing. I assessed the reports of the last couple of years and found that no incidents had happened inside the coastal cities. Kidnappings of locals and foreigners and other kinds of attacks however do happen at exposed tourist resorts and on sea. For my plan – travelling by bus into Tawau and crossing into Indonesia by boat – I saw no danger. Life seemed to go on normally in the area.

Fed up with Asia

Tawau made me feel fed up with South-East Asia. “Sorry Sir, we don’t know”, was the quite predictable answer given by the hotel reception staff upon my inquiry about the boat schedule across the border to Nunukan. South-East Asians often called me “Sir”, which I hated. Mostly it was a politeness I don’t deserve in order to get money they don’t deserve. And except for false politeness, they were not helpful. It would probably have been easy to call somewhere or to check a local newspaper. But they didn’t care. Most people here have no interest whatsoever in what’s going on in the world beyond their smartphone screen, and not inclination to find it out.

So I went to the harbour and found the whole compound already closed – no way to find out any schedule. What I did find was a deserted area, where the boats had arrived previous to the construction of the new harbour – including a border control area. A deserted border checkpoint: It was something. Further attractions of Tawau included a shrimp-shaped roundabout decoration and some decaying wooden buildings in the market area. I had plenty of time to admire the dull town in the morning hours of the next day, since the hotel staff had finally advised to go to the harbour at 7 am. The boat left at 11 am. 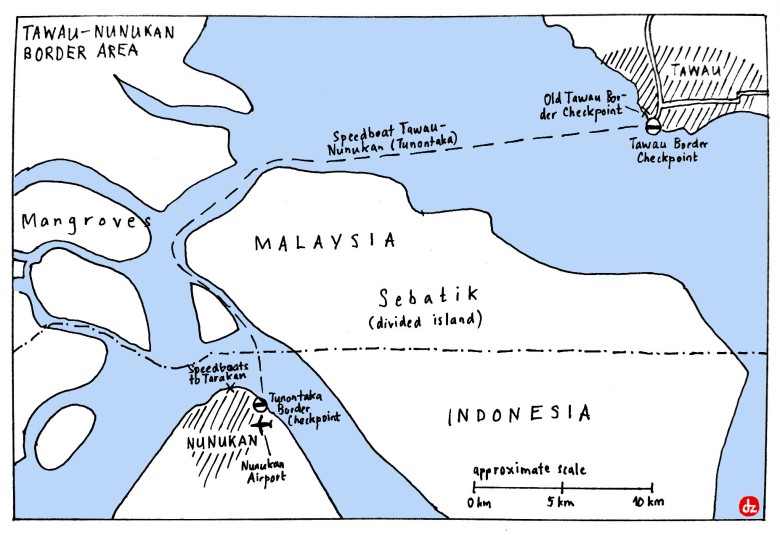 As usual, leaving Malaysia was no big deal; I just hated the guard for putting a smeared stamp into my passport. The ride across the bay is mildly interesting. On the left side, you can see Sebatik Island. Sebatik is divided, the northern third belonging to Malaysia and the rest to Indonesia. Apparently, there are one or two border guards on the island, but no controls. Tourists never visit, and for the locals it seems to be no problem. According to German-language Wikipedia, Sebatik is a safe haven for terrorists which have been expelled from other parts of Indonesia. And indeed, I saw an announcement poster in my boat: “Wanted: Local Terrorists”, showing eight rogue faces.

Arrival to Indonesia: Nunukan Express, my cross-border boat, on the right side.

Both sides of the border have very similar cultural characteristics. They are inhabited by the local nationalities of Borneo, with dots of Malay and Chinese population mainly in urban areas. Despite those similarities, Nunukan felt like another world. A new world, which I enjoyed to explore. It would be exaggerated to call Nunukan charming, but it certainly had the atmosphere of a distant and undiscovered place, which I so much appreciate in border areas. The central area around Alun-Alun square was very lively, and even more so were the two centrally located “water villages”, built on stilts inside the water. Nunukan has an international harbour (called Tunon Taka), a cargo harbour and an inland speedboat port, a tiny airport and several examples of unfinished concrete brutalism, among others a rather big mosque and a department store. 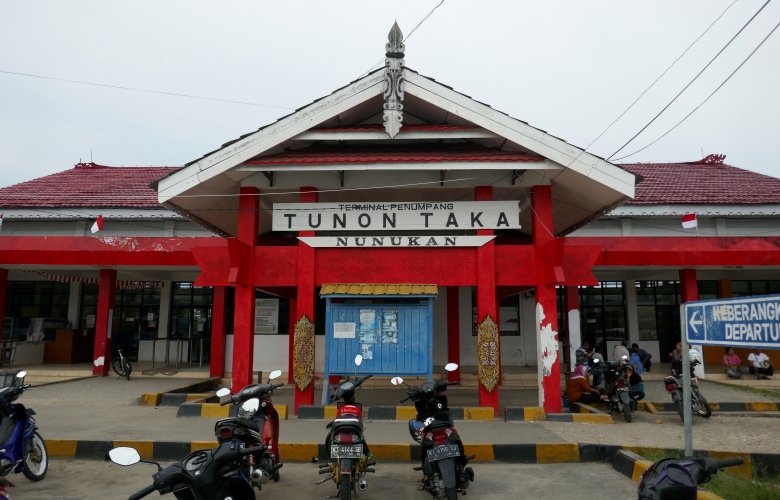 But the immediate arrival felt exactly like elsewhere in Southeast Asia. Before I even had got my Indonesian entry stamp, numerous offensive touts were already trying to drag me off, questioning “Where are you going?”, “Tarakan, Tarakan, Tarakan?!?”, or “Taxi Hotel?!” Oh Asia… I was very much looking forward to my next continent: Oceania.

Practical Information:
Transport: Several boats cross daily between Tawau and Nunukan (1.5 hours, around 100 MYR). Timetables change daily. They are not available online and the locals do not know, so you just have to try your luck. I travelled on a Monday, the first boat left at 11 am, five more followed until 4:30 pm. From Nunukan, the next substantial Indonesian town is Tarakan. Several speedboats cover the 2 hours between Nunukan and Tarakan daily, costing about 230.000 IDR. There are some direct Tawau-Tarakan connections, but not on Mondays. From Tarakan, you can either fly out cheaply or take another boat to Tanjung Selor, which has buses to other cities in Indonesia’s portion of Borneo/Kalimantan.
Accommodation: Tawau has many accommodation options in all price ranges, available through online booking sites. The options in Nunukan are more limited. Most hotels are located around the central Alun-Alun square. The best ones are Fortuna (365.000 IDR for a room) and Marvell (320.000 IDR).
Food: Restaurants in Tawau serve mainly South Chinese food, most look rather shabby. Nunukan has two inviting cafés (next to Hotel Marami on Alun-Alun square, and on the main street 200 m south of Alun-Alun) as well as several warungs, which serve cheap and fresh seafood and fried chicken. I particularly recommend the Ikan Bakar (grilled fish).
Money exchange: There are no money changers in both Tawau and Nunukan. Banks probably do change, but I found them full of people, with very time-consuming queues. In the end, I changed my leftover Ringgit informally on board of the boat across the border. The rate was not too bad.