Zum Inhalt springen
Crassier is one village. It has two slightly different names. And it has been divided between Switzerland and France since almost 500 years.

Hardly any place has been divided by international borders for so many years as Crassier on the Swiss-French border: The village was divided by the Treaty of Lausanne of 1564, at the time between Savoie and the Canton of Berne. In the 17th century, the French part changed the orthography (but not the pronounciation) of the place: Now the French side goes by the name of Crassy, while the Swiss retain Crassier.

Crassier is still one village. A sleepy one, though. The core of the village is the roundabout on the Swiss side, but directly at the vehicle border crossing. Since Switzerland’s accession to the Schengen area, the border is open elsewhere, too. That gives many options to cross, as the border runs through the middle of the village, and also along nearby roads and tracks. Have a look at the picture gallery for an impression!

A couple of historic border stones show the exact border line. The coat of arms of the Canton of Vaud (right) marks the Swiss side, while the French side is marked by a symbol which has been almost forgotten by now – at least I couldn’t find out whose emblem it used to be. Currently, French Crassy is part of Divonne municipality, Gex canton, the Départment of Ain and the Region of Auvergne-Rhône-Alpes. Neither of them bears this coat of arms.

The centre of Crassier village, as seen from the French side: Swiss border post (unmanned) with the village church and Restaurant au Boeuf Rouge (=Red Beef) in the background.The border line is visible due to the different types of pavement. The building to the far right is already in France: It used to host a fiscal office, but looks neglected by now. 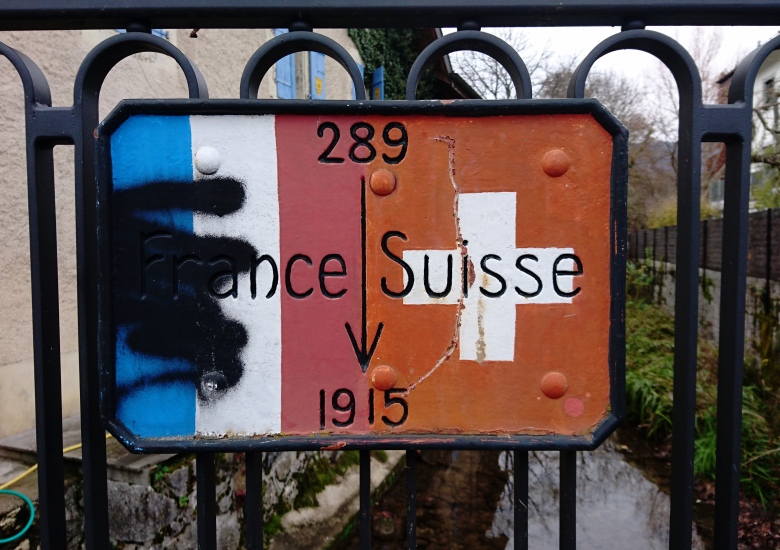 The border location as shown on a bridge crossing the creek, which marks the border in the Western part of the village. It is interesting to see that France appears to use a different shade of red in its flag.

Swiss Border barricades, unused and dumped in a yard on the French side of the border.

Another border crossing hidden in the forest. The sign looks rather intimidating, saying: „Caution! Customs. Trespassing forbidden“, but another sign at it foots specifies that passers-by which bring valid travel documents and have no goods to declare are exempted. To the left is the fenced off area of Crassy castle (Château de Crassy), the forest path leads up to the Swiss border. For about 100 Meters, the border runs on the path itself.

Then it turns left, following the fence of Crassy castle. On this picture, the top right part of the border stone belongs to France, the rest to Switzerland. Looks like they once corrected the border by 2 cm…

Where Switzerland ends: Remote border post behind the village of La Rippe, with a footpath leading down to the French village of Vésenex. The house to the right belongs to Switzerland, it used to host the Swiss customs. The little hut behind the barricade was the French border post. The crossing is closed for vehicles, but open for pedestrians.

Once a railway line linked Nyon (Switzerland) with Divonne (France). It has been dismantled more than 50 years ago, due to the construction of a new highway. The line is now used as a bicycle/hiking track. This is the place where it crosses the Swiss-French border. The fences mark the exact spot, but there are no Swiss of French signs here.