Zum Inhalt springen
Palau is famous for being the most unspoilt diving destination. But there are many curiosities to discover, such as a brand-new capital with no inhabitants.
Beluu er a Belau
Capital: Melekeok State (Ngerulmud village)
Inhabitants: 21.500
Area: 459 km2
Inhabited islands: 9
Languages: Palauan, English
Around the island: 78 km (Babeldaob Ring Road) 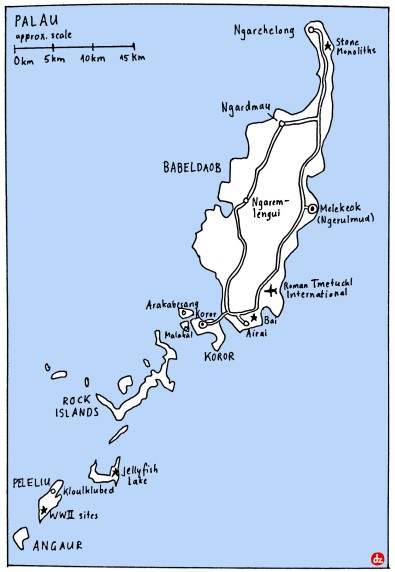 The Republic of Palau has only one port of entry: Roman Tmetuchl International Airport. I flew in from Manila long after midnight and I was full of expectation: It was my first time to Oceania. But the weather was windy and we circled a couple of times above Babeldaob island, which was visible in the moonshine. The third landing attempt finally was successful. I wondered what would have been the alternative – the next airport was in the State of Yap, in Micronesia.

Palau’s border was no hassle: Most nationalities enter visa-free here. However, return tickets are thoroughly checked. Upon exit, a 50 USD exit tax is levied. Palau had some of the most beautiful passport stamps in the world, showing a Bai – the traditional assembly hall of the village councils (see below).

Shortly after my visit, however, a new passport stamp was introduced: It’s called «Palau Pledge» and covers an entire passport page. It includes a poem, by which the visitor pledges to protect Palau’s environment. It’s probably the first passport stamp ever that has its own website. 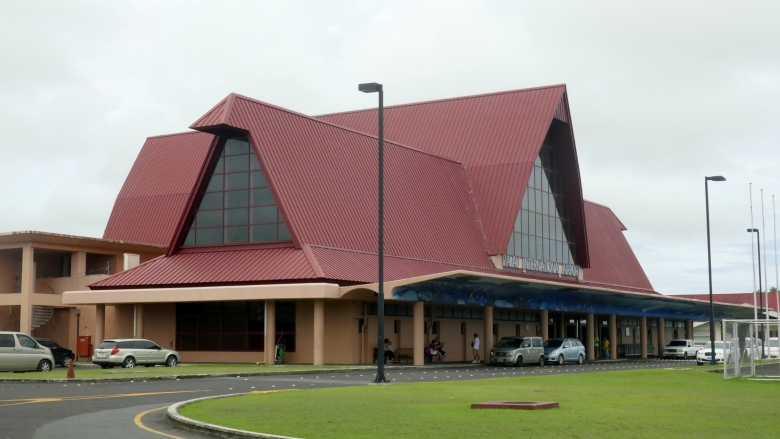 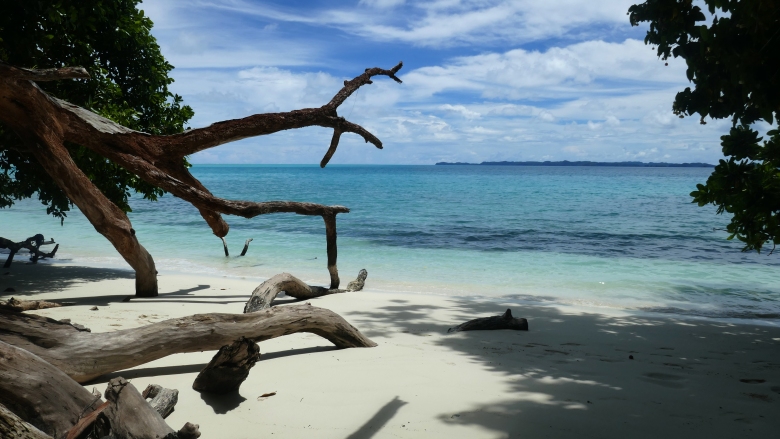 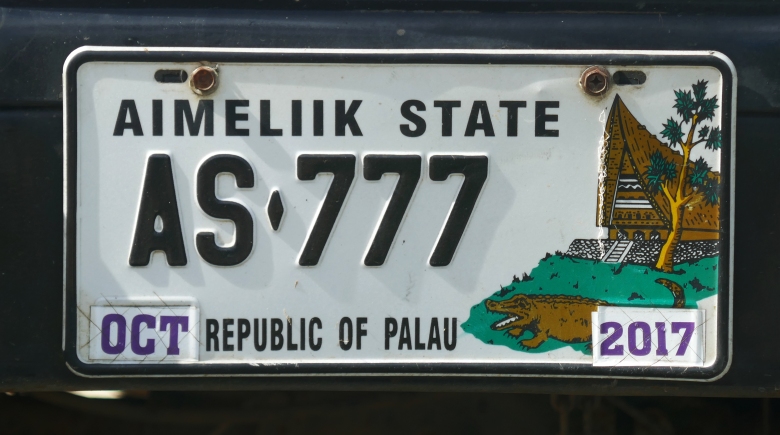 …was strolling around the capital complex, Ngerulmud (see photo below), and indulging in its absurdity. Even calling it a hamlet would be an exaggeration, as it consists of just three buildings: Legislative in the middle, flanked by Executive and Judicative. There is no restaurant, no hotel, no shops or whatever else might be expected of a settlement: no inhabitants neither, so it’s officially the world’s smallest capital. The government buildings have been constructed after 2006 in an attempt to fuse Palauan tradition and US classicism. The project was expensive and much debated. No wonder: Most of the officials and employees commute daily from Koror, Palau’s main town and former capital, where half of the population lives. 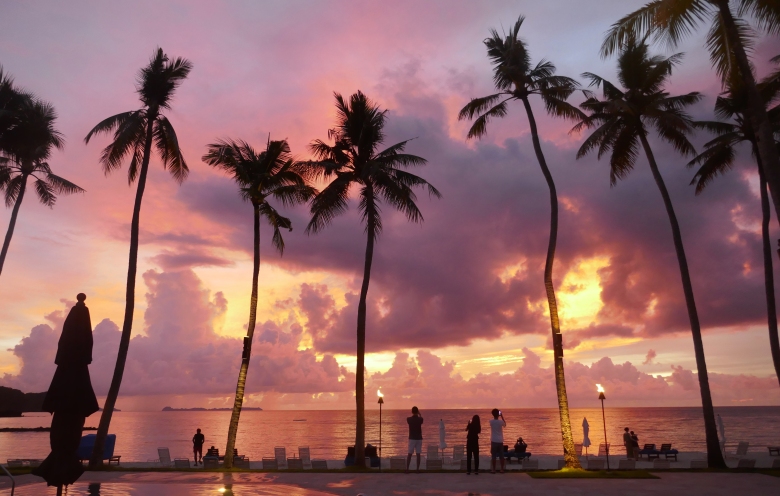 I intended to visit a WWII seaplane airport. Instead I first discovered the Pacific Islanders’ obsession with ground possession. The airport was on the premises of a luxury resort on Arakabesang Island. Its unfriendly guards were absolutely unwilling to let me enter as a non-guest. Or else: They offered me to buy a one-day entry pass for 99 USD («you’ll love it!») – a bit expensive even for Palauan standards. They however confirmed that I might use the pool bar without paying that (obviously, as long as I would consume), but in case I would try my luck and just walk over to the airport area, security would immediately escort me out of the hotel. That quite reminded me of my travel to North Korea, and I told them so. The guards were a bit offended and insisted that it was really worth the entry – «if you just would see it!» – «Which is exactly what you are not letting me do!» – «Go and see!» In the end, I got in that way and the more reasonable reception staff even allowed me to see the airport. I have to confess that I indeed loved the place a lot and ended up drinking several Red Rooster beers at the pool bar. 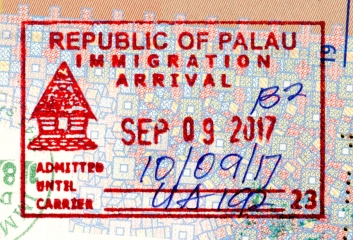 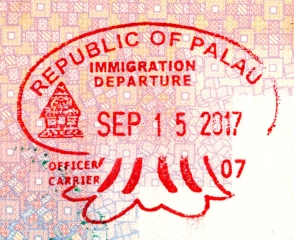 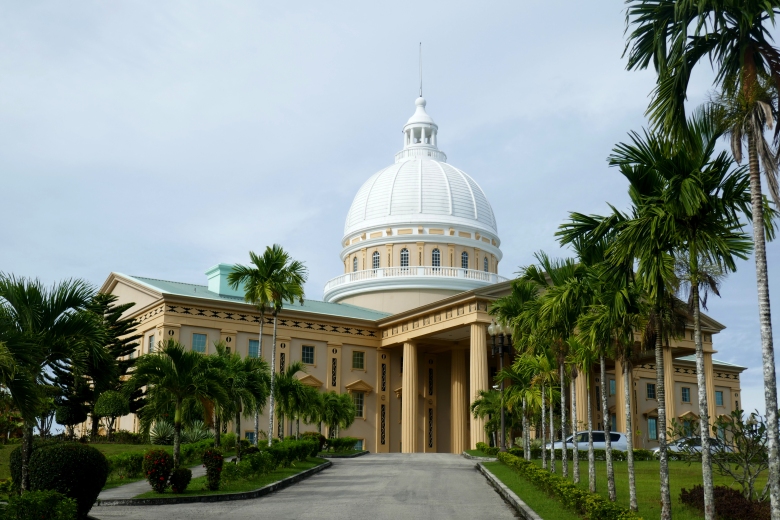 The parliament of Palau in Ngerulmud, Melekeok State. To the left is the Supreme Court, to the right the government building.

…the whole Republic of Palau has the postal code 96940? The code belongs to the U.S. system, and Palau is treated like a village in the United States. 96941, the post office that once served Palau’s capital Ngerulmud, has been closed.

…Palau has its own beer? Red Rooster is a craft style brew that comes in five types – of course, there’s a Pale Ale too. Unfortunately, outside of Koror only deplorable U.S. brands such as Budweiser are available.

…Palauans use the imperial measurement system? I wasn’t aware that it’s in use anywhere outside the U.S. and Liberia. But the employees at the car rental office in Koror couldn’t even tell how much a gallon was in litres. This was relevant since I wanted to calculate if one tank fill is enough to drive around the island of Babeldaob, which has no gas stations. It turned out to be enough, probably even for two such drives.

…Palau has a rather ridiculous speed limit? The maximum speed on Babeldaob’s ring road is 30 mph (approx. 50 km/h) – even though the road is in an excellent condition and far away from any settlements. 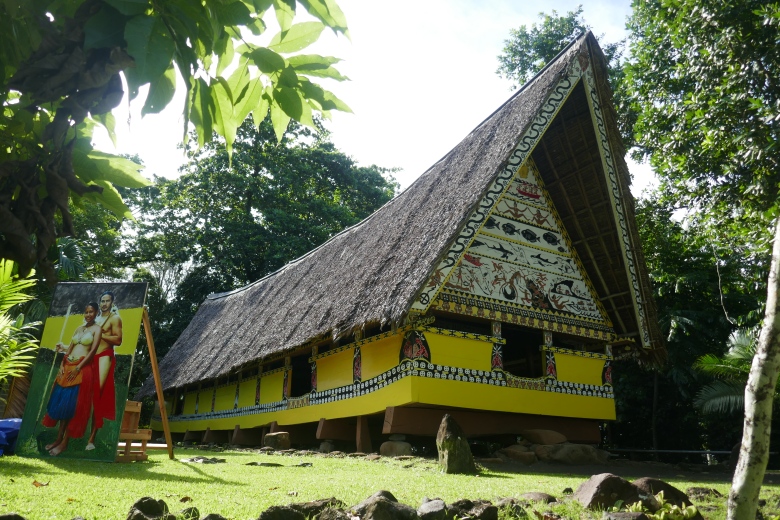 Practical Information:
International transport: Palau can only reached by air. Roman Tmetuchl International Airport has regular connections to Manila, Seoul, Tokyo, Guam and Yap (Micronesia).
Inland transport: There are regular ferries to Peleliu (2 per week, 16 USD one way) and to Angaur (1 per week) from Koror’s harbour on Malakal Island. There is no public transport by land, so you’ll relay either on taxis or rental cars (no motoscooters!). Some accommodations in Koror also rent out bicycles. A taxi from the airport into town costs 20-30 USD.
Accommodation: There are plenty of hotels – most of them rather expensive. Almost all hotels are located in Koror, the only town. I was quite happy with DW Motel, a modest and clean place in downtown Koror for about 65 USD per night. Babeldaob, the biggest island, has only one option: Palau Beach Bungalows in Melekeok, the tiny capital. Peleliu Island has one modest hotel at the port and two more expensive places in the only village, Kloulklubed.
Food: Fruit bat soup is the national dish: Traditionally, an entire bat is cooked and served in that soup. Elder locals also eat all of it, except for the bones. Restaurants rarely serve the fruit bat. Instead, American and Asian classics are readily available; and a great craft beer that comes in five variations: Red Rooster. I liked most Kramer’s Café at Koror’s harbour on Malakal Island. Outside of Koror State, there are very few restaurants, so plan accordingly or bring your own food. The only restaurant on Peleliu Island is OK café, which is closed on Mondays.
Money: Sadly, Palau has no currency. Instead, the US Dollar is used. Palau also has no own banks, but the Bank of Hawaii and the Bank of Guam both have ATMs.
Communication: Due to the lack of roaming agreements, foreign SIM cards do not work in Palau. Palau Telecom in Koror sells local SIM cards. Alternatively, two companies sell Wifi access cards. PNCC is cheaper (10 USD for 10 hours), but I found their hotspots only in Koror. PTCC charges 5 USD for 4 hours, but has hotspots also in smaller places such as Peleliu or Melekeok.
7.337565 134.488947
Koror, Palau