Zum Inhalt springen
My birthday passport party was great: I was totally alone at the Kazakh-Kyrgyz border. While I was waiting for a ride, the bored Kyrgyz border guards slaughtered a sheep.

Coming from: Karkara, Almaty Oblast, Kazakhstan
Going to: Karkora, Issyk-Kul Oblast, Kyrgyzstan
Documents required: Passport, Kazakh migration card with registration stamp. Kazakhstan and Kyrgyzstan are visa-free for Europeans.
Waiting time: 15 min (Kazakhstan), 1 min (Kyrgyzstan)
Distance from Bern: 9.970 km
Crossed on 22/06/2017, 9:00 a.m.
Rating: 9/10
Description:
Tourists often fancy an empty beach or a lone hiking trail. Ever fancied an empty border crossing? Like, being alone with the border guards? That is not necessarily cool: The guards on such places tend to be bored. And what helps against such boredom? Exactly: The luggage of the only person around. So the Kazakhs were not particularly nice to me: I was led into a huge corrugated iron hall, which contained only an x-ray machine. After my luggage had been scanned, I had to pull out all my items. And I was leaving Kazakhstan, not entering. There was remotely no other reason for such a check other than the boredom of the guards. I protested, to no avail.

For my birthday passport party, I had chosen a special place. There are several border crossings between Kazakhstan and Kyrgyzstan, and I wanted to see the most remote one: Karkara. The border is not accessible by any means of public transport. Not even taxis commute there on a regular base. Most of the year, the road is closed anyway, due to the snow: The crossing is on 2.300 meters above sea level. 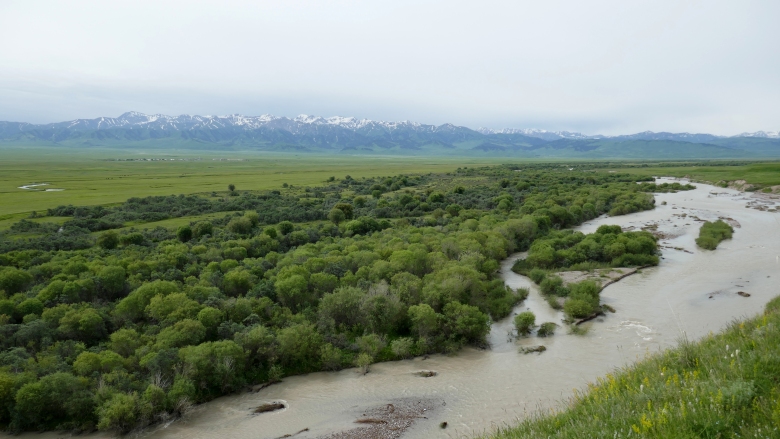 The Southeastern Kazakh highlands – an amazing setting for a remote border post.

I did however not expect it to be that remote as I found it in the end. The taxi from Kegen, a large Kazakh highland village 40 km north of the border, had dropped me at the Kazakh side of the border gate and taken two Spanish backpackers back, which had just crossed from Kyrgyzstan. The taxi left, and I was totally alone. To the horizon in both directions, the road was empty, with no human settlement to be seen. Karkara border crossing is located on a flat, grassy high plateau, populated only by a few semi-nomadic shepherds. 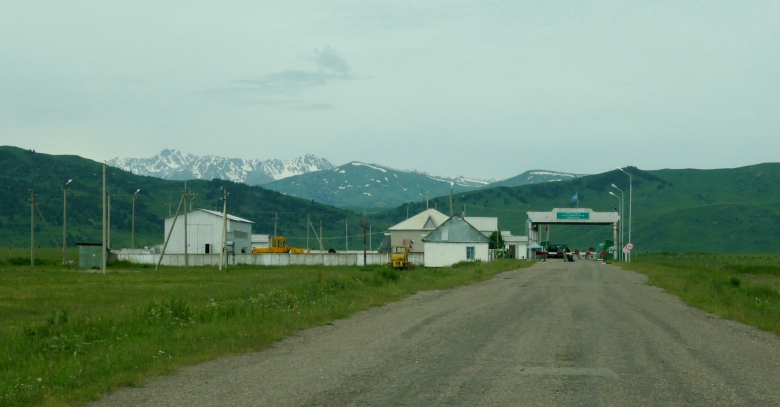 Kazakh border post at Karkara – I was alone there.

Once the Kazakh finally were done with my luggage, I had the pleasure to meet the Kyrgyz guards. They were as bored as the Kazakh. But much more friendly. “Welcome to Kyrgyzstan!” they called repeatedly, and “Happy Birthday!” The control took less than a minute – passport scan, a stamp, and I was through.

The challenge was the onward transport. One border guard had offered me to call a taxi to nearby Karakol, which would charge 100 USD. Later, he lowered the offer to 60 USD. “We have only three or four cars passing each day”, he reminded me. I however liked the border very much and decided to wait for a car nevertheless – it would not be more than three hours. I put my bag beyond the border barrier, sat on it and begun to wait. Nothing happened, as expected. No car, no truck, no bus.

After half an hour, a car finally approached, but from the Kyrgyz side.

“Young man, come here”, the border guards yelled. I hoped for a ride. “Come here, join us. Here is a stray sheep which our director has captured! We are going to slaughter it now in honor of your birthday.” Ouwkey. No ride, but some action at least. 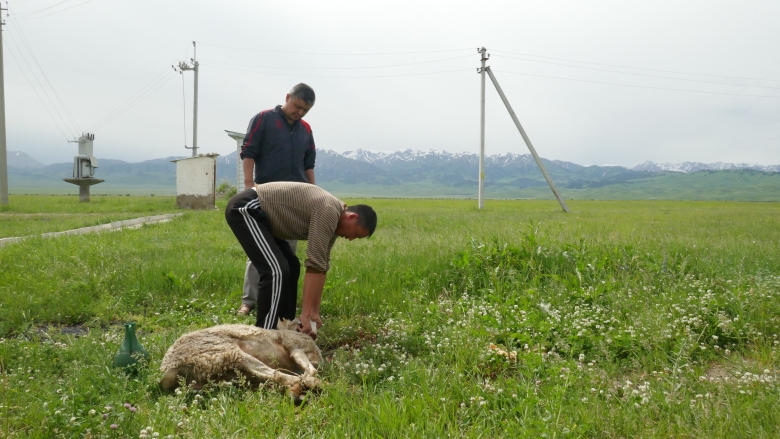 Slaughtering a sheep in honour of my birthday, or the retirement of a border guard.

“Gun or knife?” they asked me. One of the border guards had brought his Kalashnikov, while another was waiting with a large dagger. I guessed the traditional method here was the knive, and I had guessed right. Seconds later, all men gathered for a prayer and then one of the guards cut the poor sheep’s throat. As they were taking the animal apart, another border guard brought up a cup of Kymyz. Kymyz is fermented mare’s milk and not exactly a delicacy for a Central European stomach. Neither it is for a Central European nose. But the Kyrgyz love it, for it makes one strong. Out of courtesy, I took a big sip. I had tried Kymyz in Mongolia and in Yakutia before. Trying it now in Kyrgyzstan confirmed that I still did not like it. But it is not as horrible as most reports describe it. Nothing compared to Hákarl, the Icelandic piss shark.

Once I was done with the Kymyz, a car approached from Kazakhstan. It contained three Russians from Almaty on their way to a tourist resort on Yssyk Köl lake. They were more than happy to give me a lift, provided I would tell them a bit of my travels. And so my birthday passport party ended, because as it turned out, the sheep was slaughtered in honor of the retirement of one of the border guards. And I was free to leave, without the obligation to eat the resulting Beshbarmak, another Kyrgyz delicacy. 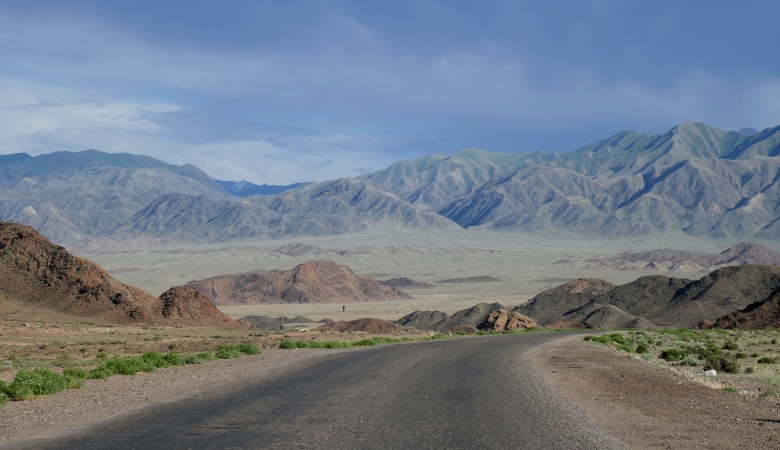 The impressive landscape continues on the Kyrgyz side.

For further information on Central Asian border crossings, consult Caravanistan.com – an excellent and updated source which substantially helped me planning my trip.