Coming from: Kyzyl-Art, Murghob Rayon, Gorno-Badakhshan Autonomous Oblast, Tajikistan
Going to: Bordöbö, Osh Oblast, Kyrgyzstan
Documents required: Passport, Tajik E-Visa, GBAO Permit
Waiting time: 30 min (GBAO), 20 min (Kyrgyzstan)
Distance from Bern: 13.372 km
Rating: 7/10
Description:
Crossing from Tajikistan into Kyrgyzstan was simply a pleasure: The landscape around remote Lake Karakul, just before the border crossing, was fantastic. I travelled together with an Iranian and a Slovene, and we had picked the perfect day to see the last chunk of the Pamir Highway in full splendour. And so was the crossing in itself: Spectacular barren mountain landscapes, the Chinese border fence just to our right – and then, once in Kyrgyzstan, the picture changed completely. The arid mountains of Gorno-Badakhshan gave way to the green, gentle hills of Kyrgyzstan, dotted with white yurts, where the nomads spent their summers. I often wonder if a border can actually be felt except for the paperwork. And here it was just too obvious that we had arrived in a new country.

Paperwork was not a big issue. We had rented a jeep with a local driver in Murghob, and he knew how to do the things. Actually, the crossing was quite an obstacle parcours on both sides, which involved a 15 minute discussion with a specialist on veterinary diseases appointed by Tajikistan’s president. But we simply sat in the jeep and waited, while our driver Asan took full responsibility. My biggest challenge was not to take pictures. It was so picturesque! But on the Kyrgyz side, several tourists have recently been detained for taking pictures or filming the so-called “regime objects”.

Picturesque: Waggons with no obvious purpose at the Tajik border control.

To us, the Kyrgyz border guards were much more than friendly. “Switzerland? You’re the third today. Two cyclists, in the other direction.“ The border guards kept a check list on all foreigners who passed.  There were no other Iranians or Slovenes, though. The guards proceeded to consult us on our onward travel. “If you want to go to China, just flag down a KAMAZ truck on Sunday night. Than sleep at the border – there are waggons where you can stay!” – the upcoming China passport party already sounded promising. 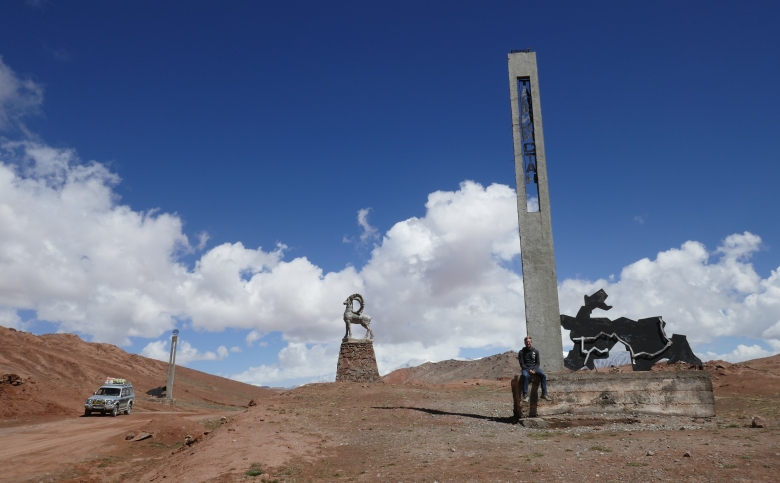 Hailing from Soviet times, most probably: Signs at the Kyrgyz-Tajik border. The actual border posts are far away from here – it is a one hour drive between the two sides. So I reckon taking photos was OK here.

Later I leant that not for everybody the crossing was that easy. Czech tourists, who had crossed from the Kyrgyz side, were demanded to bribe the Tajik officials with 40 USD. Or, as the Tajiks put it, as a fine for driving under influence of alcohol. It was the passengers, though, who supposedly were drunk – not the (local) driver! But the Czechs even considered themselves lucky, since some Americans, who had passed the border before them, had even paid 120 USD. And then there were those unlucky guys detained for taking pictures – could have happened to me.

For further information on Central Asian border crossings, consult Caravanistan.com – an excellent and updated source which substantially helped me planning my trip.