I almost missed out my destination. I had come to Belleek, to see a border which meanders through the small town. Once I noticed that I had arrived, I had already left the place again. No checkpoint and no sign had warned me that I had entered a new country, so I had simply passed, assuming the border would be indicated in an obvious way.

Normally, it is easy to spot borders: They are marked by boundary markers, checkpoints, flags, signs and uniformed men and women. Even within the Schengen area, they are quite visible, the minimalist version being a sign telling the name of the new country. But not in Ireland, an island divided into the Republic of Ireland and Northern Ireland, the latter belonging to the United Kingdom. The inner-Irish border is a rather complicated line, based on historic county boundaries. It cuts through several villages and towns. The border  stretches for 499 km (310 mi) from Carlingford Lough to Lough Foyle – more than four times the direct distance between these places. Approximately 300 roads cross it, making it maybe the world’s most permeable border. 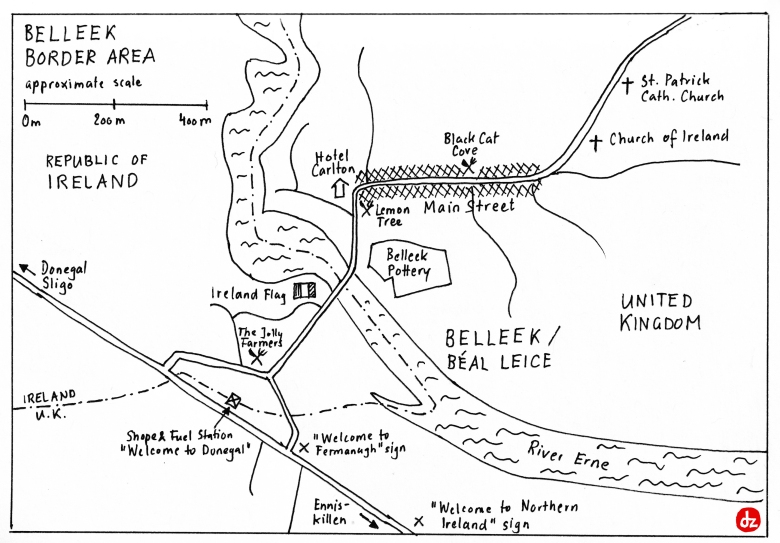 Belleek is the westernmost point on this line, and the westernmost settlement of the United Kingdom. The village is famous for its Chinese pottery and the Carlton Hotel, it enjoys a beautiful location on river Erne. Most attractive to me was, however, the fact that the border doesn’t only divide the village into an Irish and a UK part, it even runs several times through it. After the Brexit vote, this border is supposed to become an EU external border soon. Since the UK will leave the common market of the EU, this will mean that custom posts will have to be installed. Irish and some British politicians try to find a creative solution to avoid this. 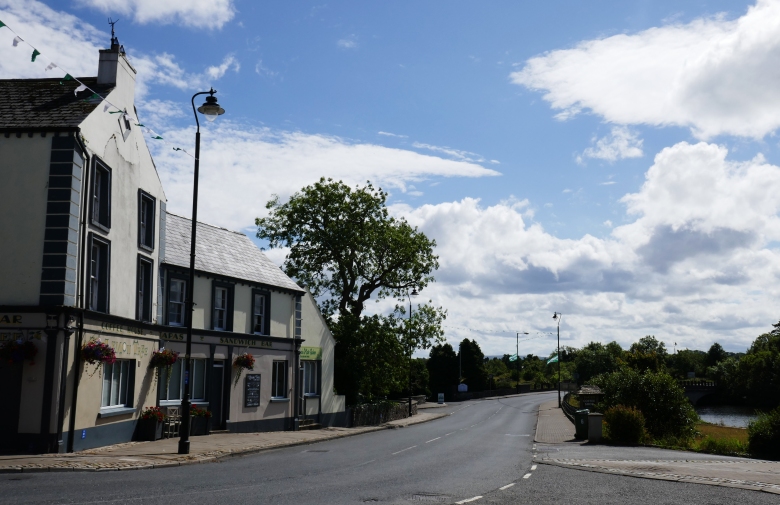 It came a bit as a disappointment that by now, the border is almost invisible. I particularly missed the border markers, which even indicate the irrelevant border between Switzerland and the tiny Principality of Liechtenstein. Instead, the boundary can be recognized in a rather implicit way: 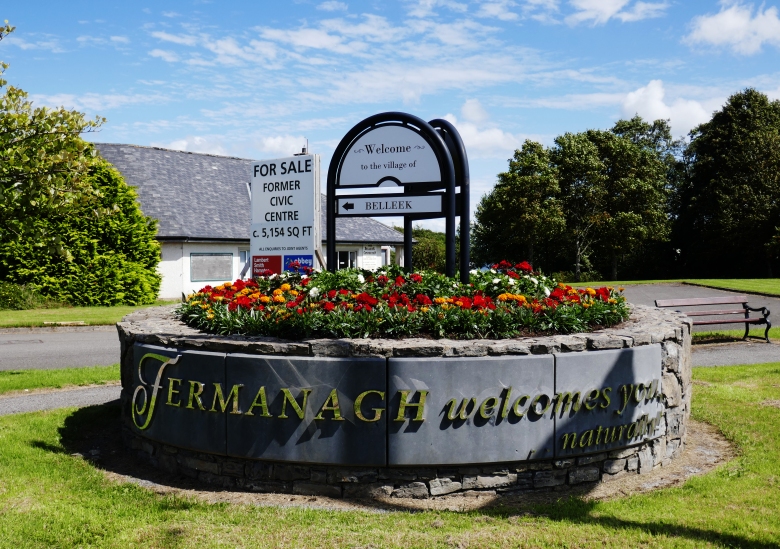 Many border crossings are marked by the names of the involved counties. To recognise the border crossing, knowledge about the affiliation of those counties is needed: Fermanagh belongs to Northern Ireland. 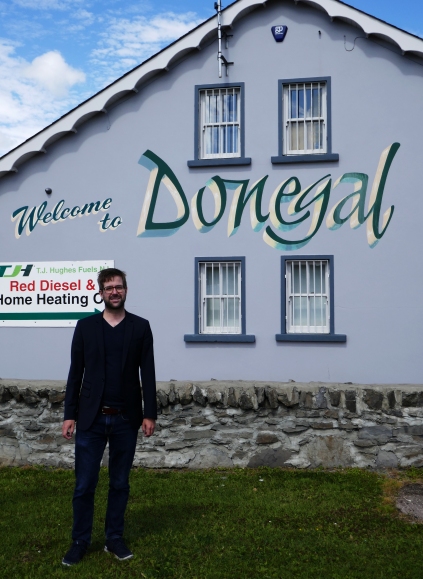 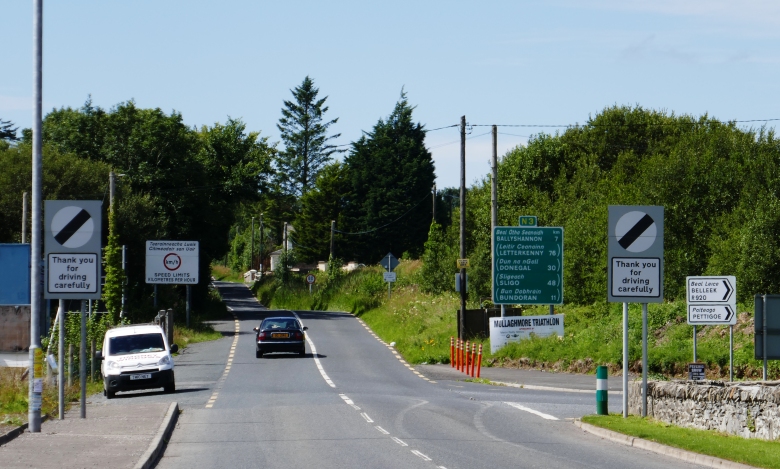 Implicit border markers on the highway: UK signs are in English only and feature miles, while the Irish signs are bilingual Irish-English and indicate distances in kilometres. 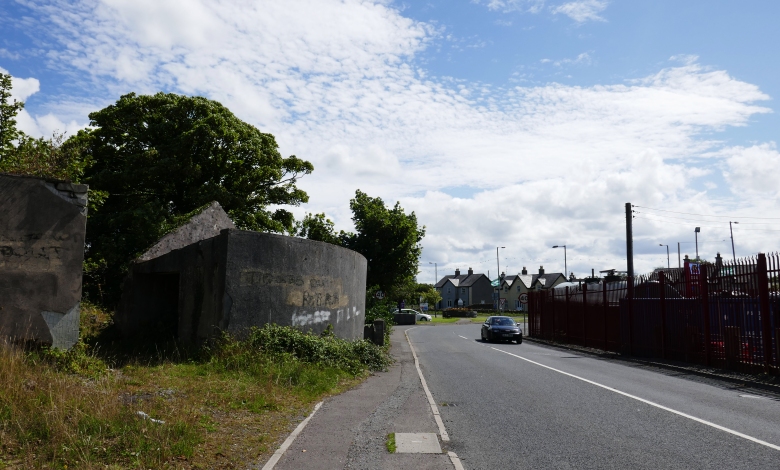 No sign at all: This is one of the border crossings within the village, as seen from Ireland’s side. 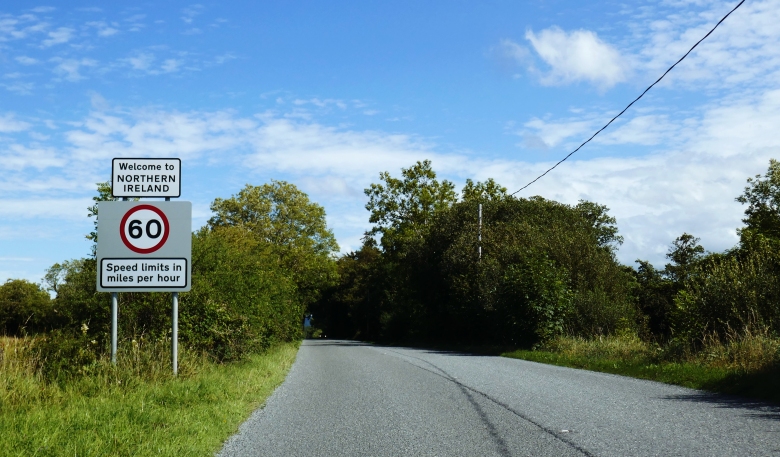 The border becomes obvious just on the onward journey towards Enniskillen, Fermanagh’s main town. This sign is a couple of hundred meters into Northern Ireland.