Zum Inhalt springen
Greenland may not have proper land borders, being an island (the world’s largest!). But it does have frontiers. They are rough and remote, and I got stuck in one on my very first day in Greenland.

Actually, all of East Greenland feels like a frontier area. Only 5% of Greenland’s tiny population of 56.000 live here, and they are almost cut off from the West: From Tasiilaq, the main settlement area, only two planes per week leave for West Greenland – compared to six to Iceland. From Ittoqortortmiit, the other settlement, there are even no direct flights: The locals need to change planes in Akureyri and Reykjavík if they want to get to their capital, Nuuk. They rarely want, however: The East uses a different language than the West, which has no official status. Like many frontier regions, the East feels neglected, it seems to enjoy better relations with Iceland than with the rest of Greenland. Other consequences of its remote location are a considerable drinking problem and a high dependency on social welfare.

Greenland’s frontier: Kulusuk settlement with 300 inhabitants – half of the houses (those with faded painting) are empty.

Under these circumstances it was no surprise that East Greenland provided for a proper passport party.

Landing at Kulusuk Airport felt like arriving to the Wild West. The runway of East Greenland’s international airport was not paved, but the touch-down on the gravel was surprisingly smooth. The little airport building looks quite weather-proof with its tin walls, and surprisingly it had two entrance doors: One for international arrivals, one for national. That makes sense: Greenland is neither part of the European Union nor of the Schengen agreement, to the external borders are (supposedly) guarded and foreigners have to carry passports – European IDs are not enough!

In Kulusuk, the border check was a relaxed affair. Behind the “international arrivals” door was a souvenir shop, whose cashier offered to stamp the tourists’ passports. No official check was done, though. Despite Greenland’s special status, the stamp had the same layout as Schengen area stamps, with the country abbreviation “DK” (for Denmark) surrounded by the European stars. As place of entry, the stamp merely stated “Kalaallit Nunaat” – the West Greenlandic word for “Greenland”. 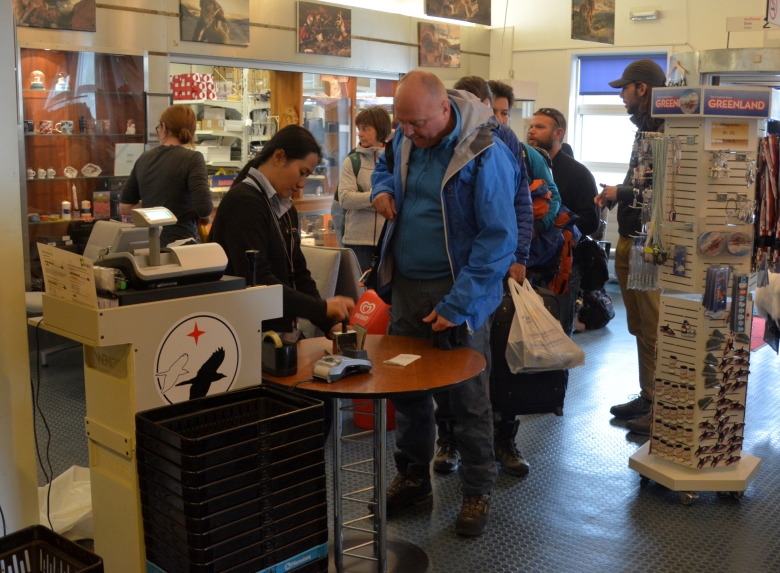 We had arrived with a delay of five hours. No big deal elsewhere, but Kulusuk has no roads to the town of Tasiilaq and all the other settlements of the area. All transport is done either by boat or by helicopter. But the helicopters were fully booked and the sea too rough for the boats, so there was no way of getting to Tasiilaq, where we had booked accommodation. As a first experience in Greenland, we were stranded in a settlement of 300 inhabitants. As it quickly turned out, 17 other tourists were in the same situation.

Stranded in a tiny village

And Kulusuk did feel remote. The population must have been much bigger once, so many houses were unoccupied and empty. Even the occupied buildings had no access to water and sanitation, so the locals went to water distribution points to fetch water for their daily use. There is no garbage treatment, so the whole garbage of Kulusuk’s history is just dumped behind the village, at the spot with the best sunset views. The only shop had already closed, there was no restaurant or pub and the hotel apparently fully booked.

Not the poster view of Kulusuk: garbage dump behind the village.

But our accommodation problem was easily solved: The owner of our booked accommodation in Tasiilaq called some Kulusuk locals, which provided some space in two (inhabited) houses. Luckily, the guide of a German tour group had still managed to buy some food, which he shared with all the stranded travellers. Sleeping on the living room floor of a Greenlandic family together with a group of strangers was certainly not the most pleasant experience, but it felt like an appropriate introduction to East Greenland.

Sunset in Kulusuk, as seen from the garbage dump.