Zum Inhalt springen
The Swiss-French border runs right through Hotel Arbez and bisects the bar, the staircase and some of the rooms. A unique place, particularly during the pandemic-related border closure.

The Swiss façade of Hôtel Arbez Franco-Suisse, with the road border crossing to France in the background. The Swiss-French border runs right through the hotel building. It has an entrance on the Swiss side, and another one on the French side. The painting on the hotel’s wall shows two card players, who share a table in the hotel’s brasserie: One sits on the Swiss side, the other on the French one. 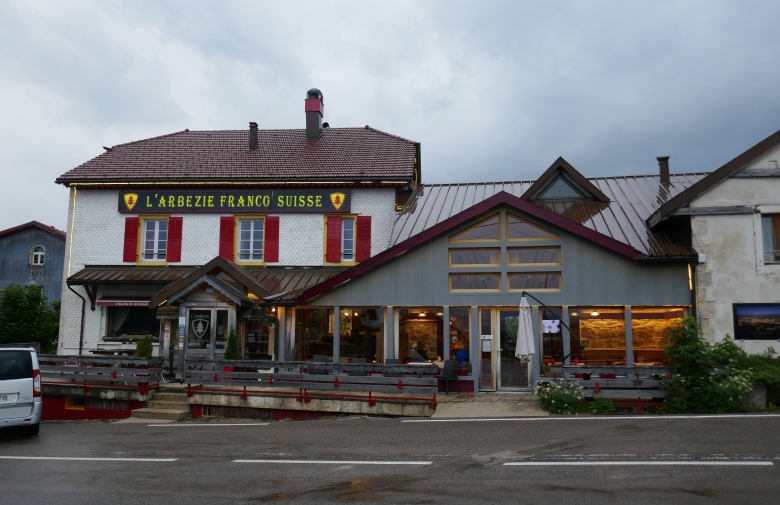 This is how hotel Arbez looks like from the French side. Due to its particular location, the hotel has a Swiss address (61, Route de France) and a French one (601, Route de la Frontière), and also two phone numbers. 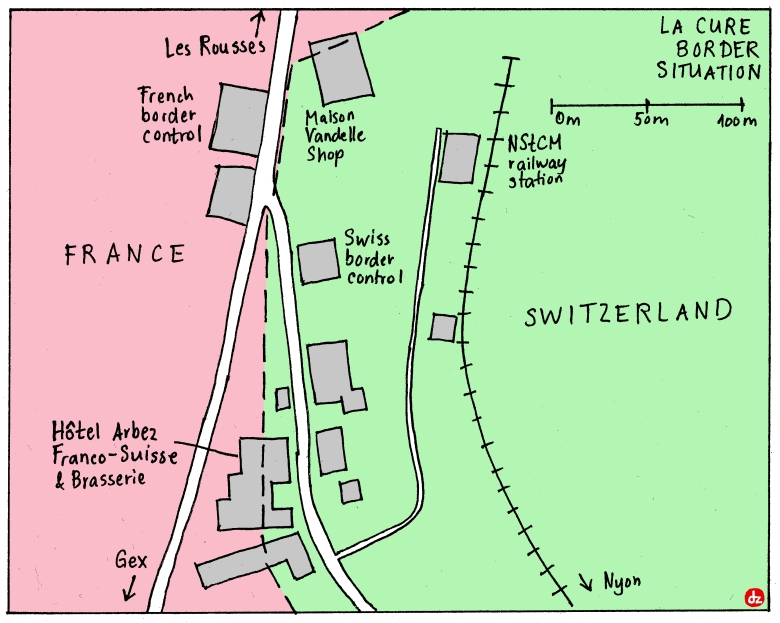 The hotel is in the hamlet of La Cure, which is divided in a Swiss and a French part. In the centre of the hamlet are the Swiss and French border checkpoints and hotel Arbez. Furthermore, there is a train station with hourly trains to Nyon in Switzerland; the line to France has been abandoned. The unique thing about La Cure is: The border does not only bisect the hamlet, but also several buildings.

This is how a border inside a building looks like: The flags above the bar of Hotel Arbez show the exact locatino of the Swiss-French border. The beer tap (with Swiss boxer beer) is located approximately 30 cm into French territory. Theoretically, if you order your beer standing on the Swiss side, you should pay in Swiss Francs, while from France in Euro. In practice, the hosts let you choose which currency – it will be either 4 Francs or 4 Euro. So for once, it is even slightly cheaper in Switzerland!

Maison Vandelle’s location is even more particular: It is located on the French side of the border checkpoints, but 80% of the building belongs to Switzerland – including a tobacco and spirits shop, on the right side of the picture. The door on the left side of the building is already in France. Since the building is more easily accessible from France, the border guards fenced off its Swiss side during the Covid-19 pandemic. In normal times, only the different pavement pattern shows the actual border.

The reason for this strange situation is the Treaty of Dappes of 1862, which established a territorial swap between Switzerland and France around la Cure. Dappes is the name of the valley to the Southwest of La Cure, which belonged to Switzerland until 1862. France was keen on that territory for strategic reasons, as a major highway linking two parts of France runs through it. Therefore, France offered Switzerland a territory on Le Noirmont mountain as a compensation – and half of the hamlet of La Cure.

The treaty entered into force three months later, in February 1863. One provision said that all buildings standing on the border line by then should be left standing. Which made some businessmen building houses on that very line in the intervening time – among others the later Hotel Arbez, which was initially just a grocery shop on the Swiss side and a bar on the French side.

During the Covid-19 pandemic, the hotel’s location on the border meant that two different sets of pandemic-related rules applied inside of the building. „Not a challenge for us“, Alexandre told me, the manager: „We just apply the stricter rule all over the hotel – which is mostly the French rule“. Which meant for example that the Brasserie just opened three days before my visit, and not three weeks before, like gastronomy in Switzerland. And officially, visitors from the French side were for a while not allowed to get rooms – hence the word „chambres“ was made invisible with tape. Same for the sign to „La Suisse“, since border crossing is still not allowed.

In practice, however, it is not possible to enforce border controls in a building which has exits to Switzerland and to France. Little yellow arrows on the floor even quietly point out how to get to the other side of the border without control. The hotel’s location enabled a Swiss-French couple to meet during the time of border closures. And the management offered free rooms for French medical staff working in Swiss hospitals. 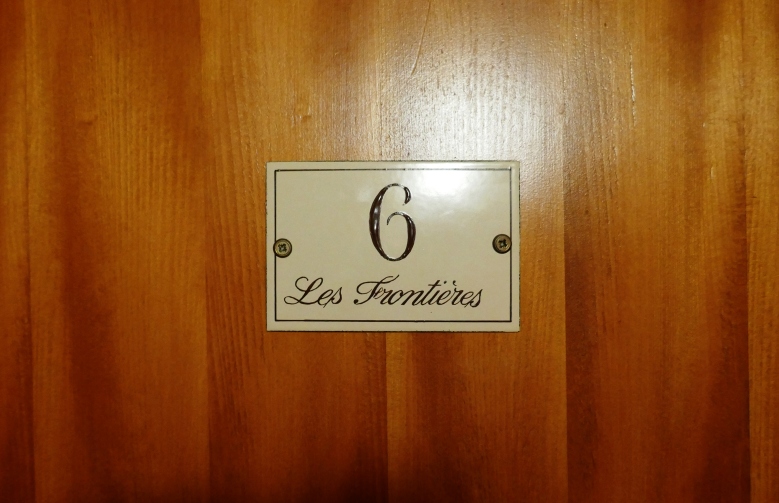 Most of the hotel’s rooms are either in France of in Switzerland. Three of them, however, are bisected by the border: Numbers 6, 9, and 12. Obviously I insisted in getting one of those. It was No. 6 – Les Frontières.

This is room No. 6: Just the perfect place for a border traveller. I slept with my head in Switzerland and the feet in France. When I woke up during the night, I quickly crossed into France to go to the toilet, which was again in Switzerland. My view was on the Swiss side of the road border checkpoint. 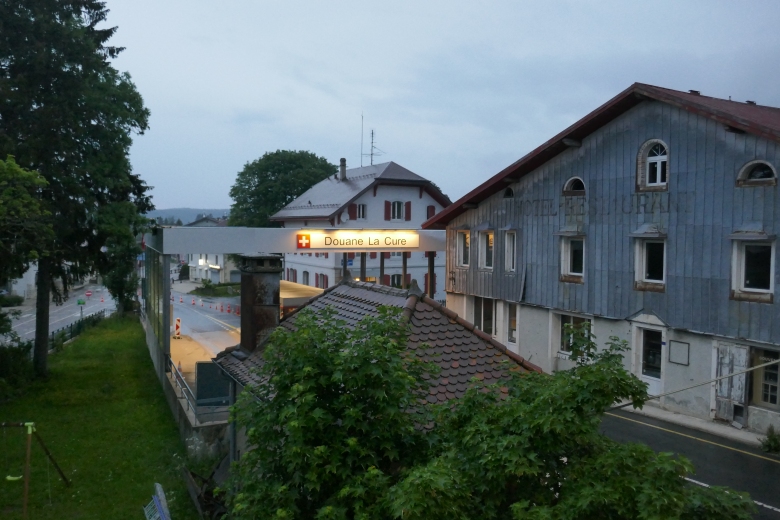 La Cure border checkpoint, as seen from hotel room No. 6 in Hotel Arbez. Through the French side exit of the hotel, I took a quick stroll on the French side of the border, which was technically illegal due to the Covid-19 related border closure. There is not much to see or to do in French La Cure, there are no shops or restaurants. But it was a strange experience to be able to get there, but not being allowed to cross back into Switzerland by road: I had to pass through the hotel. At the time of my visit, both sides still enforced rather strict border controls. 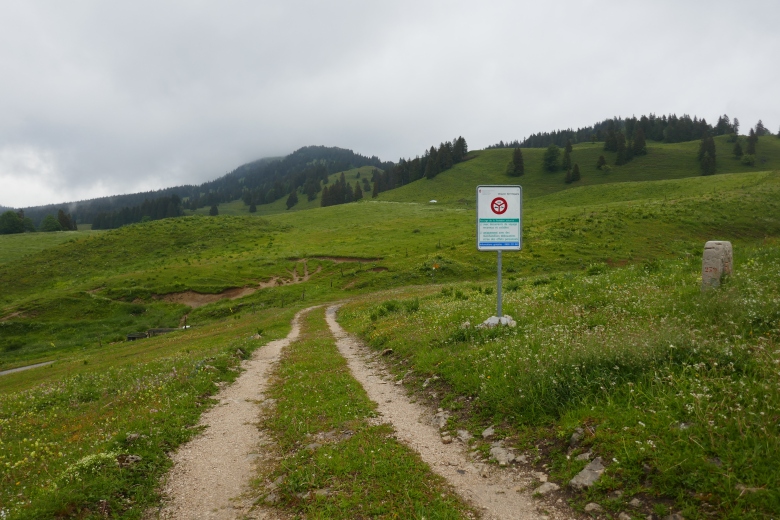 The next morning I found a much more open border crossing: Between the alps Petit Sonnailley (France) and Grand Sonnailley (Switzerland) on La Dôle mountain. A long and wet hike took me there and further along the border towards Geneva.