Zum Inhalt springen
Nauru is an unconventional tourist destination. In terms of sightseeing, however, it has much more to offer than other Pacific nations. The sights are quite peculiar, though.

So don’t expect too much classical sightseeing in Nauru. The Pacific island is no beach destination, neither. But if you’re open for one of the most bizarre range of sights, Nauru is just right: No other place on the whole continent is that much shaped by industrial decay and the sentiment that the glorious days are over. Add to that some strange World War II leftovers and nature that is unlike any other Pacific island and you get a unique mix. Don’t expect crowds: I was alone in most of the places listed here.

Rock Pinnacles (Meneng/Anibare): The South and East Coasts of Nauru are lined with rock pinnacles, photogenically standing in the shallow water. I don’t know any background information on them, but they are worth a stop and a photo. The most spectacular pinnacles are found approximately one kilometre north of Anibare Harbour. 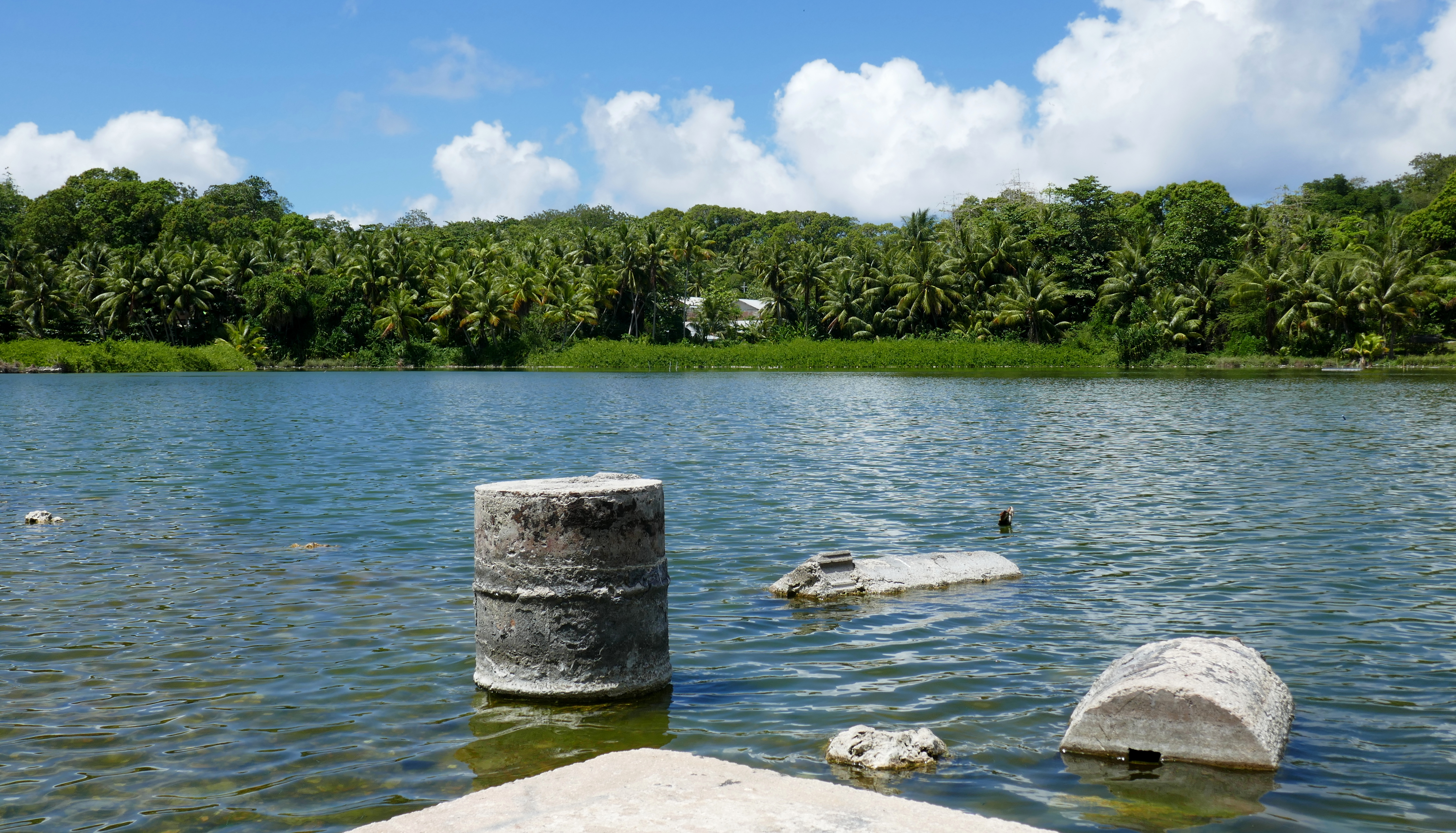 Buada Lagoon (Buada): Astonishingly, this tiny island has an inland lake: The Buada Lagoon. The small body of water is lined with coconut palms and the houses of Buada village. Swimming is not possible, but its shores are a nice spot for a picnic or reading a book.

Topside Phosphate Desert: Thousands of years of birds crossing the Pacific Ocean have left a huge pile of bird shit in Nauru’s interior. The guano converted into phosphate – the source of Nauru’s wealth in the 1960s and 1970s –, hence Nauru’s nickname “Birdshit Island”. Since the 1990s, most phosphate reserves are depleted. All that’s left is a desert of phosphate pinnacles, now mostly overgrown with a bit of vegetation. Two tracks cross Topside, as Nauruans call the area, and driving on them is quite an experience: I’d never seen such a landscape before. At the end of the main track is the only site where phosphate is still excavated. The other fenced off area is located at the site of the former Meneng stadium, with a lot of cars and buses standing in front of it: Australia’s asylum processing centre (see below).

Asylum seekers and refugees in Nauru: Topside hosts a detention centre for asylum seekers of Australia (the one in Manus, Papua New Guinea has been closed recently). Since 2013, asylum seekers aren’t allowed anymore to touch Australian ground. Instead, once they are intercepted, they are brought to one of the processing centres. The asylum procedure takes place there, in the framework of the „Pacific Solution“. Applicants who are granted refugee status by Australia (according to the Geneva Convention) are, however, not allowed into Australia. A small quota (currently 27 per year) is resettled to the United States. The rest remains in Nauru, with no perspectives whatsoever. Due to that, Nauru now counts a substantial Iranian and Somali population. The human rights situation at the processing centre is subject to controversies. Australian and Nauruan authorities do not like journalists to peek their noses into the issue. Therefore, journalists applying for a Nauruan visa have to pay 8.000 AUD upfront – which will not be reimbursed in case of denial! (Photo: Well guarded entrance to the detention centre.)

The Phosphate Treatment Centre (Aiwo) is a big industrial plant which used to treat the phosphate, brought down from the mines of Topside. The area includes two large storage halls with piles of phosphate and several processing installations in various stages of decay. When I wandered around, I found a transformer running and electrical lights on – maybe part of the facility is still in operation, or it is simply a sign of neglect that they didn’t even bother to turn off the light. The area is not fenced off, so you can just stroll inside. At one entrance, there is a guard hut. The guard on duty saw me pass, but did not react – probably because also locals regularly cross the site as a shortcut to get to the Civic Centre.

Cantilevers (Aiwo): Two sets of huge conveyors that were once used to transfer the phosphate from the treatment centre onto the ships. The southern one is ruined, the northern one could possibly still be used. They just stand at Aiwo’s beach and are tremendously photogenic. 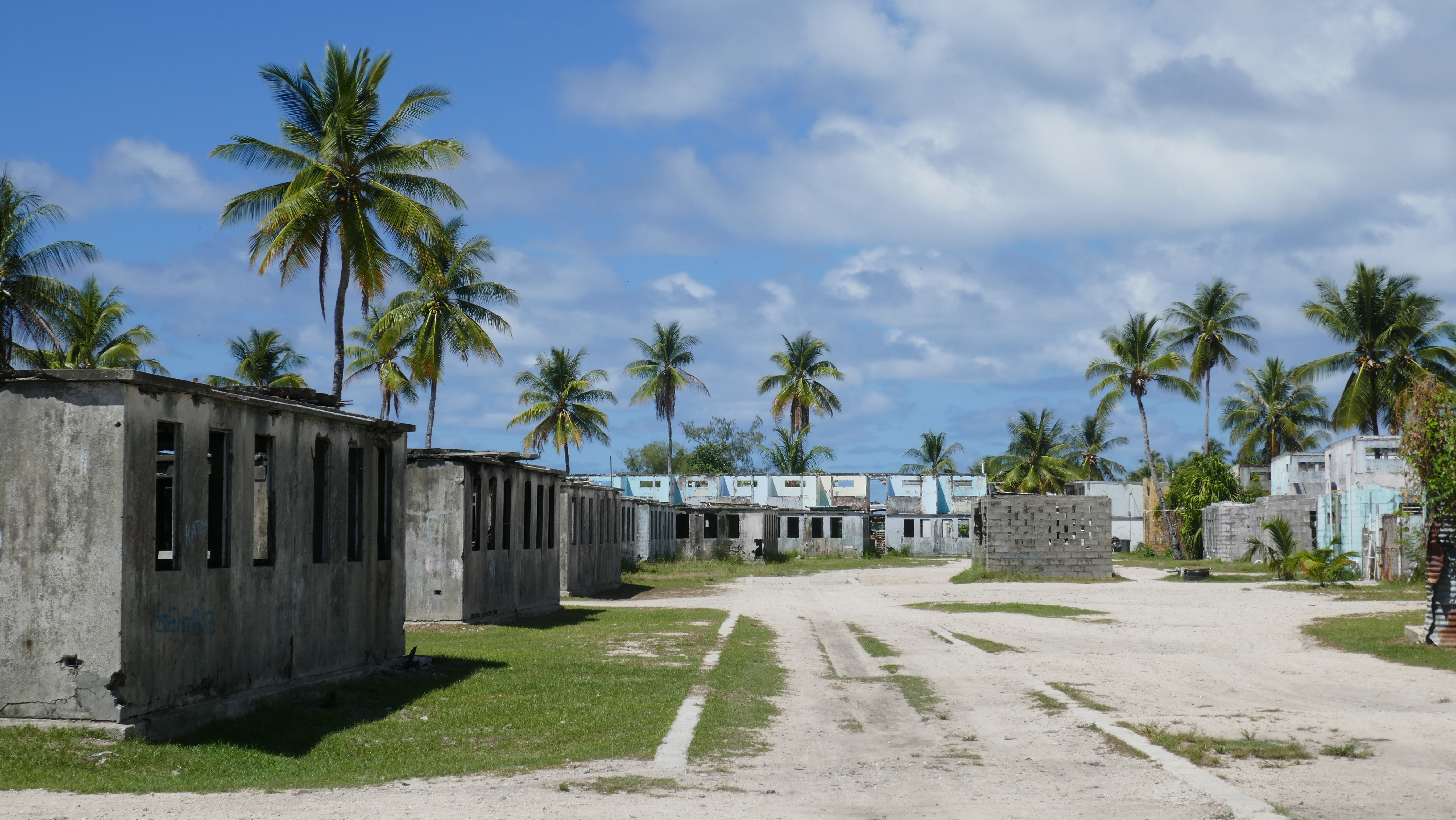 Barrack Ghost Town (Denigomodu): During the phosphate boom of the 1960s and 1970s, many migrant workers from Kiribati and Tuvalu worked in Nauru’s mines. Most of them lived in a barrack town in the south of Denigomodu. A few blocks of it are still inhabited, but most of the settlement is now an eerie ghost town. I-Kiribati migrants store their boats in some empty housings, and many buildings show impressive pieces of street art. The settlement’s cemetery is a sad sight. The tombstones show names of men from faraway islands, which mostly died in their 40s or 50s. (Presumably, those who made it into their 60s have returned home…)

Other phosphate related sites include the main building of the phosphate company close to the northern cantilever, surrounded by industrial debris, the still active phosphate mining sites on Topside and several administrative buildings scattered around the island.

The Japanese Prison is the spookiest sight in Nauru. During WWII, the Japanese built a couple of prison cells among the Topside’s phosphate pinnacles. The site is still accessible, but seven decades of vegetation have left their mark: The overgrown cells look quite spooky, especially when visiting alone (which is mostly the case, as there are no tourists around). The place is not signposted. To find it, pass the “Welcome to Buada” sign on the Aiwo-Buada road and then turn left into the forest. A narrow path leads to the cells, just before a gravel road leaves the main road to the left. There’s a checkpoint of the phosphate company at the beginning of the gravel road, which may help to find the prison site.

A bit more to the North, Command Ridge is the highest point of Nauru (elevation 65 m). During the Japanese occupation in WWII, it used to be a watch post. At the top of the hill, a rusty cannon is still standing. Other war relics require more time to discover, but the whole hilltop is scattered with cartridge cases, bottles etc. To get there, take the gravel road to the left after the “Welcome to Buada” sign. Use the first path to the left for the cannon, or the second one for the highest point of the ridge. 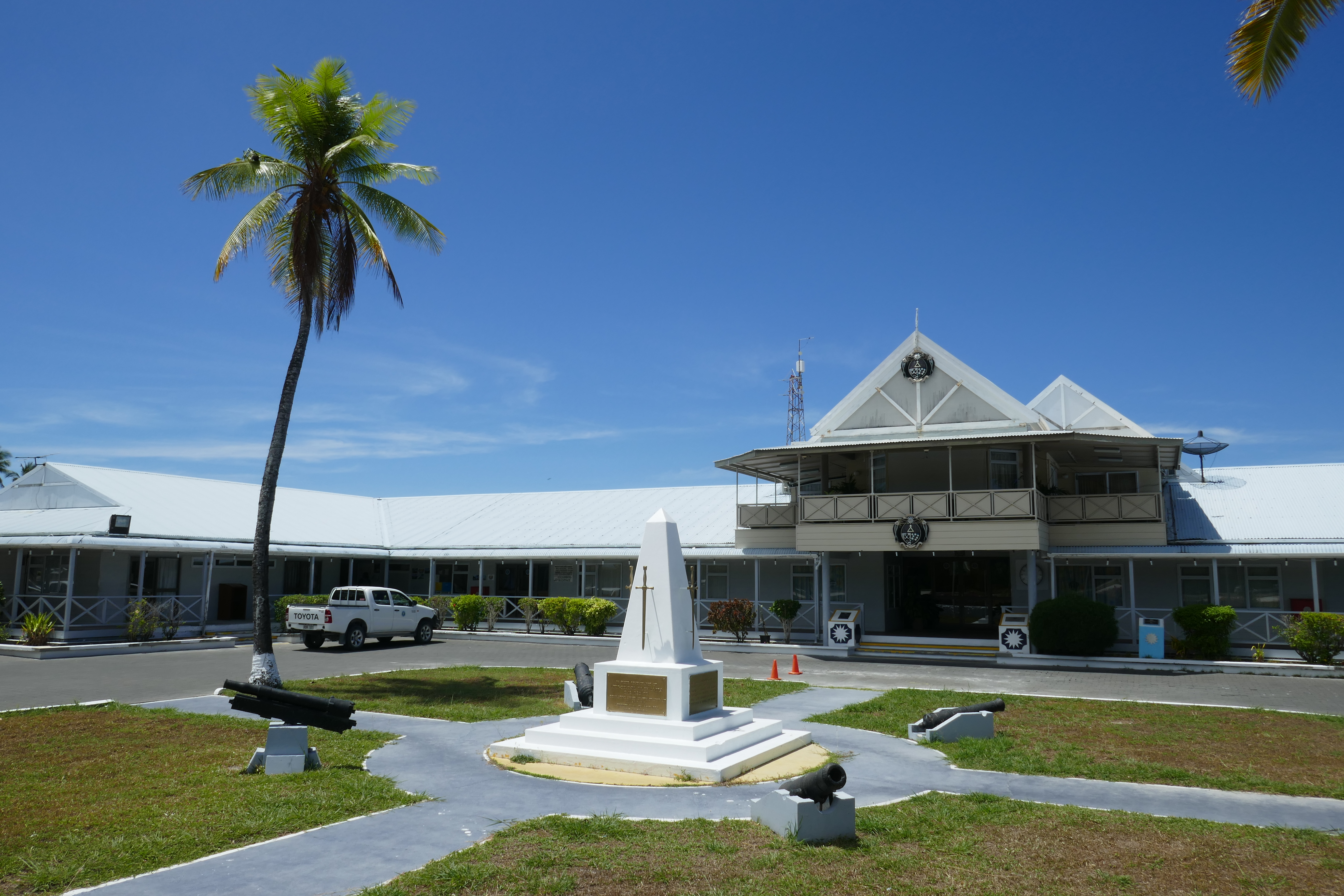 President’s Palace and Parliament (Yaren): Nauru’s government institutions are located along the airport’s runway, in Yaren village. When I showed up in the parliament building, the lady in charge (with the title of Deputy Parliament Clark) agreed to take me for a short tour. The assembly hall with its 19 seats is modest, but one of the most modern buildings on the island. All parliament sessions are shown live on Nauru’s national TV! In Westminster tradition, the parliament speaker holds a richly decorated mace. The presence of that mace (on the speaker’s desk) is mandatory for the validity of parliament sessions. In the 1970s, the mace has been stolen and was provisionally replaced by a richly ornamented bamboo stick, which looks much more typical for a Pacific nation. However, in 1997, Australia donated a replica of the original mace. The bamboo stick is now left in a corner of the photocopy room.

The Cliff’s Lodge (Denigomodu) is a ruined villa on a ridge above Denigomodu, with a great view down to the coast. According to Lonely Planet, it is the former residence of Nauru’s president and has been burnt down during 2001 protest against the government mismanagement of national funds. Other sources indicate that is used to be the seat of manager of the Nauru Phosphate Company. Whatever is the case, the ruin enjoys a nice location and is a witness of Nauru’s turbulent past.

Airport (Yaren): As of October 2017, just four flights per week leave the Republic of Nauru Airport. It is therefore no great nuisance that Nauru’s main road (the Island Ring Road) has to be closed every time when an airplane lands or departs. This is because the road runs between the runway and the airport’s tiny terminal. The plane crossing the blocked road is a popular (for Nauru standards) photo subject.

Linkbelt Oval National Stadium (Aiwo) is the poorest national stadium I’ve ever seen. Linkbelt Oval has no tribune, no cabins, no scoresboard. It is just a flat square in front of the ruins of the Phospate Treatment Centre. The ground is a moonscape of gravel and phosphate dust. The “stadium” is used for Nauru’s Australian Rules football league, but also for international football games. While guest teams do not to appreciate Nauru’s rough ground, the local side prides itself with the nickname “the hard men of football”. Come here on a Saturday morning to see a league game.

Sport in Nauru: Nauru has an Australian Rules football league and a national team. Association football / soccer used to be popular among the migrant workers at the phosphate mining’s heyday. At that time, Nauru had a soccer league with six teams, which played their games at the Denig Oval in Denigomodu. This “stadium” is now a storage area for ship containers, and the league has been discontinued once most workers left Nauru. Nauru never had a soccer national team. On an individual level, Nauru offers the unique chance to run around an entire country: The island ring road is a mere 17 km long.
Practical Information:
See separate blog entry.